With the 2016 Tour de France about to start, all eyes are on Team Sky’s Chris Froome and whether he can win the race for a third time. If he does the triple, he’ll do so aboard the same Pinarello Dogma F8 that was first introduced in 2014.

Team Sky’s hotel near Omaha Beach in Normandy was understandably busy when we arrived on Thursday morning, with an intense media spotlight on the British team and its leader. Following the team’s training ride in the rain, we took a closer look at Froome’s race bike before it was washed and prepped for the next day.

It is essentially the same bike with the same equipment that Froome and his teammates have been riding since for the past few seasons, since Pinarello introduced the updated Dogma F8 in 2014. There was no sign of a new version lurking in the back of the Team Sky truck, but it can only be a matter of time before there's a new version, given the typical three-year development cycle. So similar is the bike, in fact, that we could have just copied and pasted our story from 2014. We haven't of course, and there are some subtle differences worth talking about. The most immediately obvious change is the custom paint job featuring a rhino that celebrates Froome’s Kenyan roots and his support for Unite for Wildlife, a charity that was set up to put an end to the illegal wildlife trade.

A reminder of the key design features of the Dogma F8 in case you’ve not been paying attention for the past couple of years. Pinarello worked with Jaguar to develop a frame that it claims is 12% stiffer, 47% more aerodynamic and 120g lighter than the old Dogma 65.1 Think it replaced. The Dogma F8’s frame is made from Toray T11001K composite and weighs around 860g in a 54cm frame size, according to Pinarello. 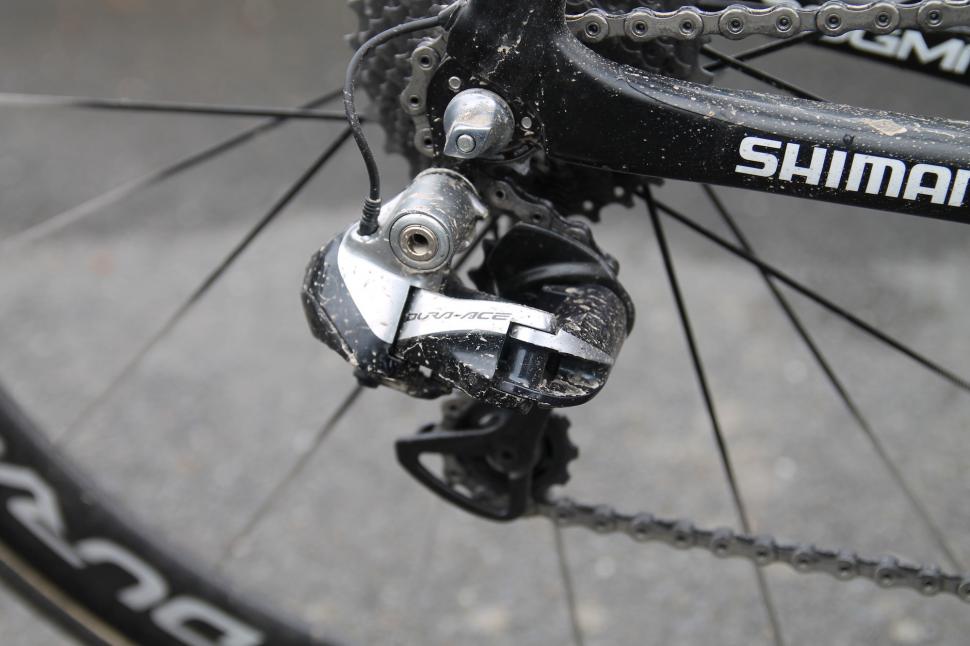 Shimano might have just unveiled a brand new Dura-Ace 9100 groupset, but Team Sky is still relying on the previous version of Dura-Ace Di2. This is a bit of a surprise, equipment manufacturers typically like to use the Tour de France as a huge advert for new products, but we presume the teams will be switching over in the off-season and riding it in 2017. And of course, Team Sky prefers to stick with tried-and-tested equipment in a race of such importance.

The neat thing about an electronic groupset is the ability to add extra shift buttons. Froome has the optional climbing shifter pod, stripped of unnecessary plastic casing and therefore saving weight, fitted to the centre of the handlebars. It can’t save more than a handful of grams, but this is a team obsessed with marginal gains remember. 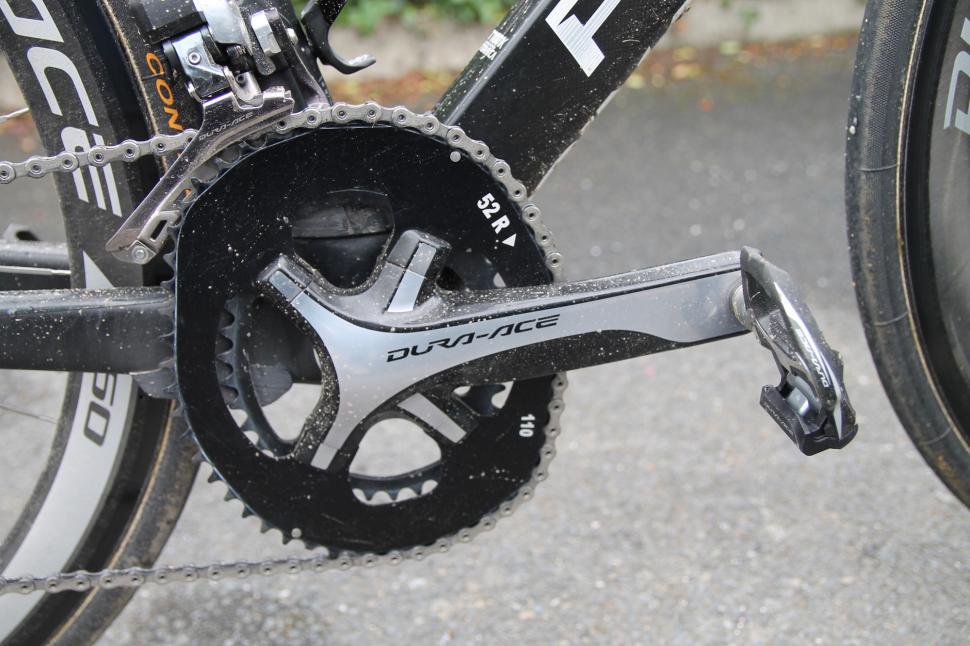 While all of the team use regular round Dura-Ace chainrings, Chris Froome is still spinning the odd looking Osymetric chainrings, in a 52/38 configuration. The 52 tooth big chainring provides the equivalent of a 56 at the top of the stroke and a 48 at the bottom. It must clearly work for Froome, but it’s interesting that no other Team Sky rider has followed his lead and fitted the same chainrings. 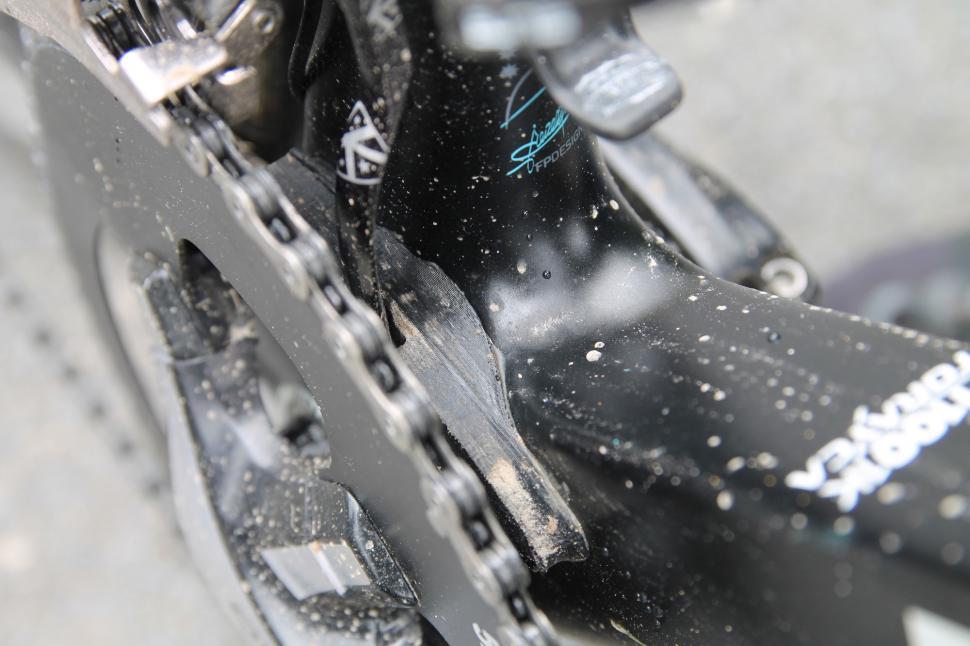 When we asked the team mechanic about the reason for this, he told us it was to prevent the chain falling off using the non-round chainrings. We can’t recall Chris Froome having any incidents with a dropped chain during a race, but we know the racers don’t like to take any chances so it’s probably a case of better to be safe than sorry. Standing 1.86m tall, Froome uses 175mm crank arms rather than the more common 172.5mm crank arms. Meanwhile, there’s an 11-28t cassette out back which should provide all the range he needs for the climbs of the Tour de France.

Froome’s bike is fitted with a 121mm aluminium PRO stem with a couple of carbon spacers below, and an aluminium PRO handlebar. Both are finished with a Team Sky blue stripe, which is now available in the shops. 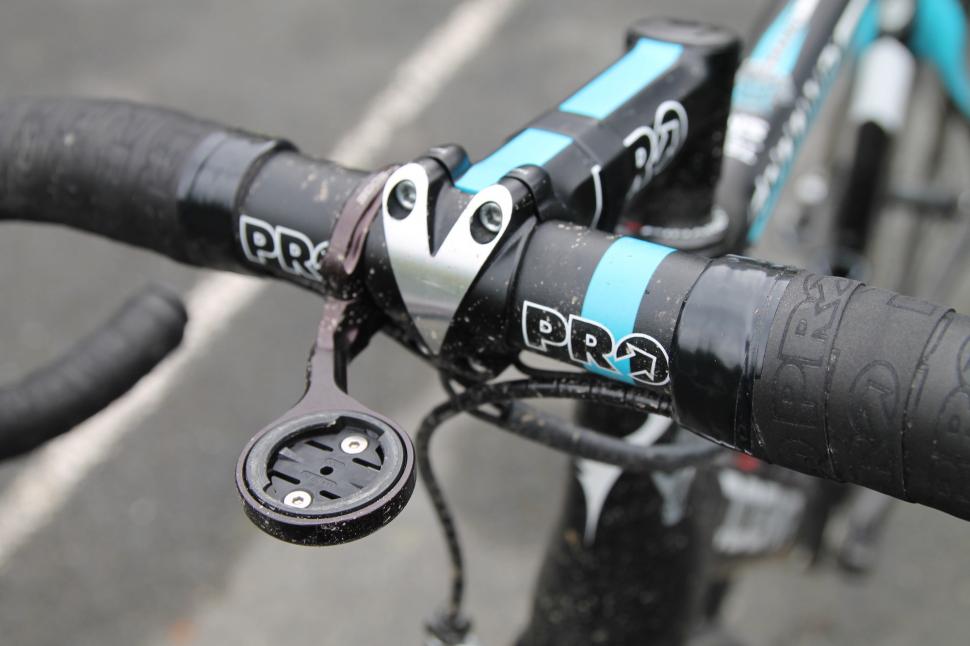 A K-Edge out-front mount is used to attach his Garmin computer, which receives power data from the Stages power meter attached to the left crank arm. We’ve spotted double sided Stages prototype power meters in the past, but Froome was using a regular single sided version, the same as you can buy in the shops. 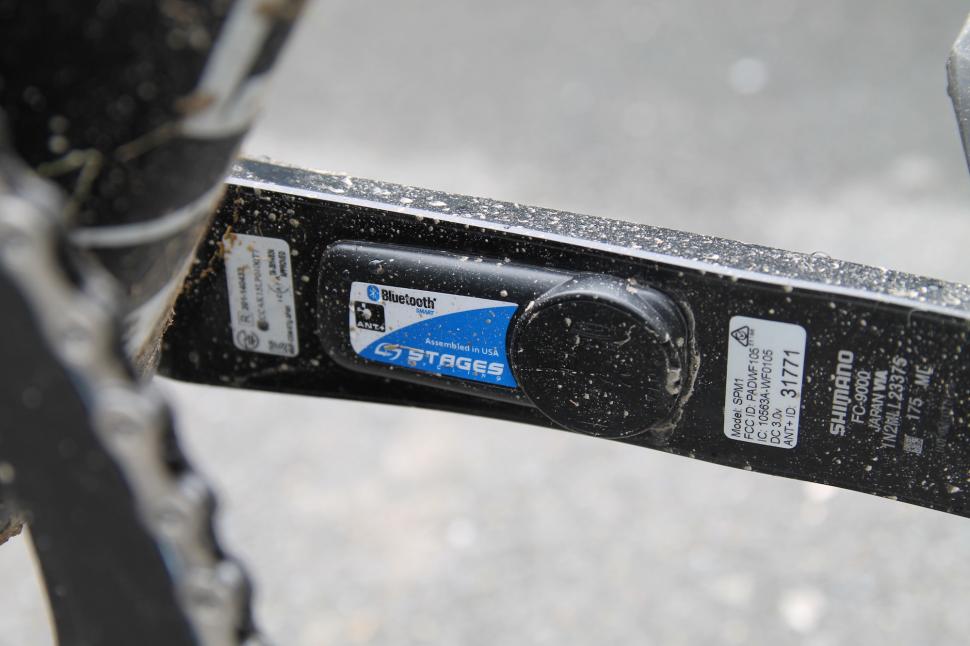 The Dura-Ace C50 wheel is the most popular wheel in the professional peloton and these were fitted to Froome’s bike. He’ll use these for the flat stages of the race but is likely to swap to a shallow section rim for the mountain stages. Shimano has launched new wheelsets as parts of its overhauled Dura-Ace 9100 groupset, and it’ll be interesting to see if Team Sky use them during the race. 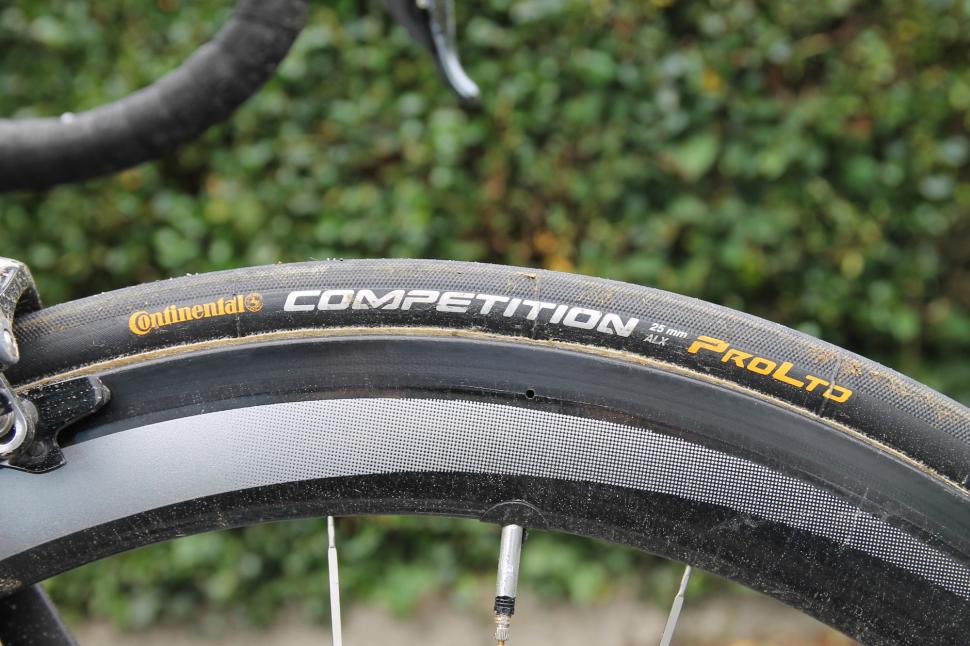 When it comes to tyre width, 25 is the new 23. Most of the bikes we’ve been looking at this week before the race gets underway, Chris Froome is using Continental Competition ProLtd tubulars in a 25mm width. 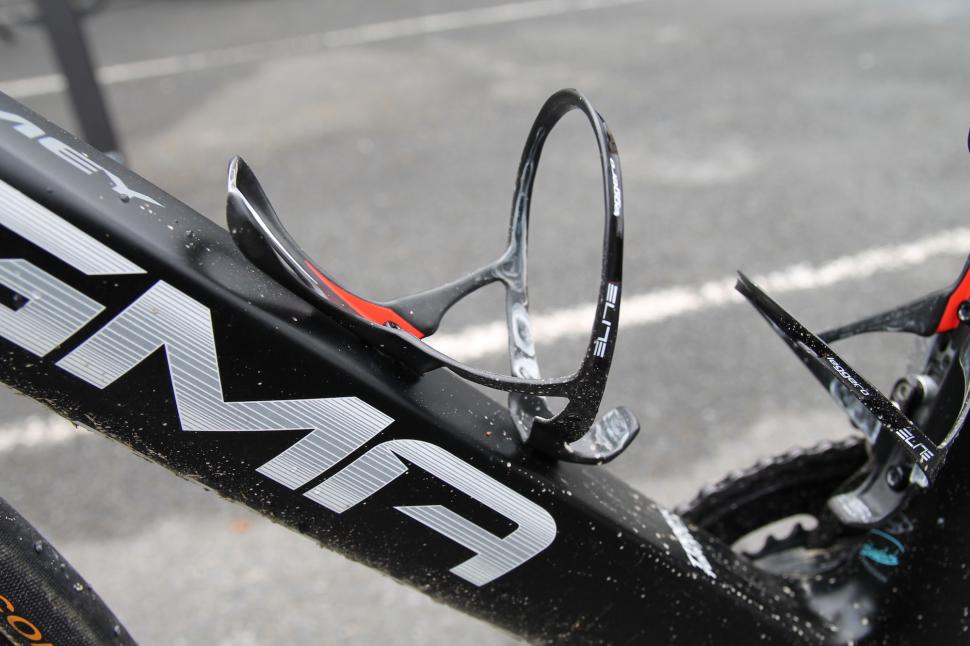 Froome deviates from the regular Elite bottle cages used by the rest of Team Sky with these lightweight Elite Leggero minimalist cages. 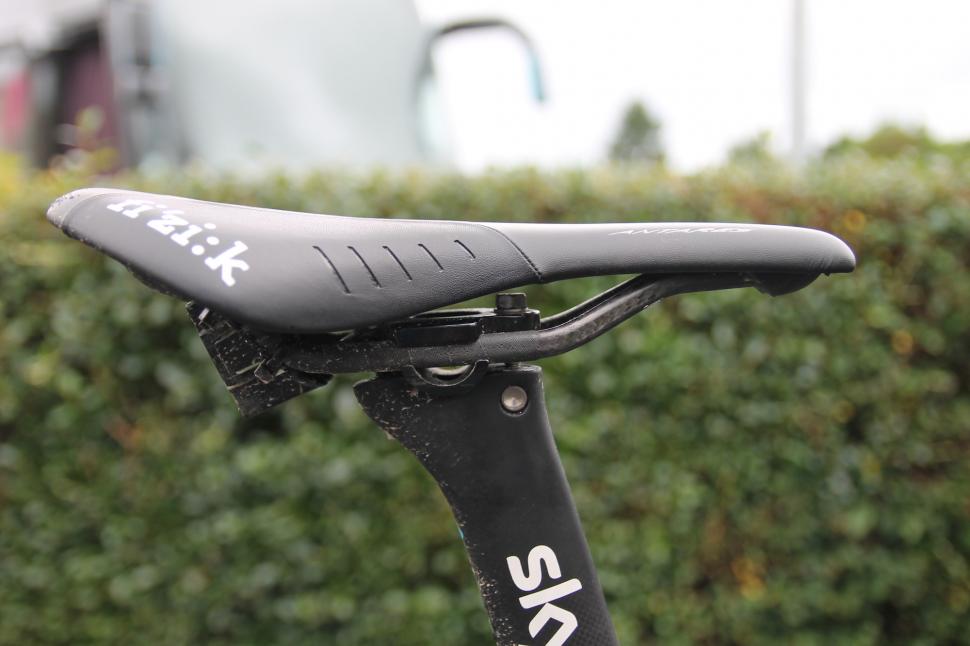 Finally, a Fizik Antares saddle with carbon braided rails is Froome’s preferred saddle shape from the Italian company’s range of saddles. That bracket fitted at the back of the saddle is for the GPS receiver that all Tour bikes are now fitted with. The saddle isn’t level but is fitted with the nose slightly pointing down.