Merida has formally announced details of its new Scultura Disc, the bike that Team Lampre-Merida rode in the Tour of Flanders at the weekend.

The new Scultura Disc is available in both carbon-fibre and aluminium frame variants. The carbon-fibre models feature 12mm thru-axles front and rear, and 160mm disc rotors – following a trend in disc brake road bike design that we discussed in an article on road.cc last weekend – and a new means of heat dissipation.

“The brand new Scultura Disc… combines the comfortable but also stiff and efficient riding characteristics of the rim brake variant with the general benefits of disc brakes,” says Merida.

- Check out our First Ride of the rim brake Merida Scultura Team here. “The whole implementation – including its very own solution for heat dissipation – not only earns the Scultura a competitive edge but also raises the actual performance of the disc brake system in use, which can be clearly perceived and measured.”

We’ll come back to the heat dissipation system in a mo.

As mentioned, the new Scultura Disc will be available in three frame variants, two carbon-fibre and one aluminium.

The CF4 is built to a race bike aggressive geometry while the CF2 and the Lite frames are more relaxed although still performance orientated.

Merida says that the Scultura Disc is almost identical to the rim braked version in terms of head tube and bottom bracket stiffness, comfort and aerodynamics.

The chainstays are slightly longer – by 8mm – for more tyre clearance, but the only other differences are related to the disc brakes, adjustments having been made to the fork and the rear triangle to handle the one-sided disc brake forces. 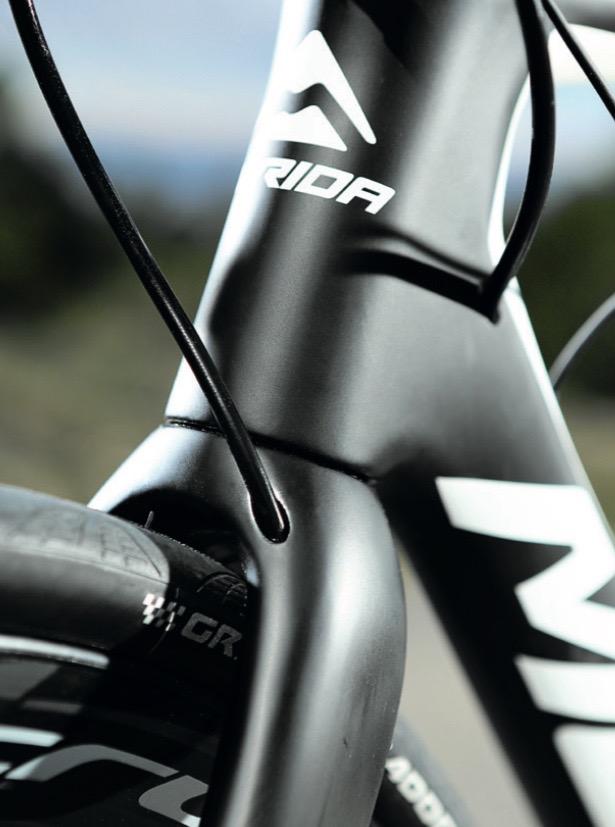 As we mentioned in our article from the weekend,  neutral race support in high-level races carries wheels that conform to these standards.

The thru-axles on the CF4 are RAT (Rapid Axle Technology), a design introduced by Focus to allow for fast wheel changes.

The CF4 and the CF2 both use flat mount callipers front and rear. All models take tyres up to 28mm wide.

Right, about that heat dissipation system… “While front brakes are always well-cooled thanks to constantly being exposed to the oncoming airstream, the performance of rear brakes benefits from active heat management,” says Merida.

“In this position, it effectively dissipates the uprising heat through CNC-milled cooling fins. Tests confirm that during a four-minute brake the temperature is reduced by roughly 35°C with the Disccooler.”

Merida believes that the Scultura Disc is well suited to the cobbles thanks to both those disc brakes and the increased tyre clearance, so expect Team Lampre-Merida to be on the new bike for this Sunday’s Paris-Roubaix. Also, the slight weight penalty of a rim brake model makes minimal difference in a mostly flat race like this.

I’m out in Belgium with Merida and will be riding the Scultura Disc on the cobbles over the next couple of days. Stay tuned for a First Ride once we’ve got the miles in.