Professional race bikes occasionally pop up for sale from time to time, but here’s your chance to own one of the fastest race bikes from the 2015 race season, as listed on the road.cc classifieds. It’s a Giant Propel Advanced SL belonging to German sprinter John Degenkolb. 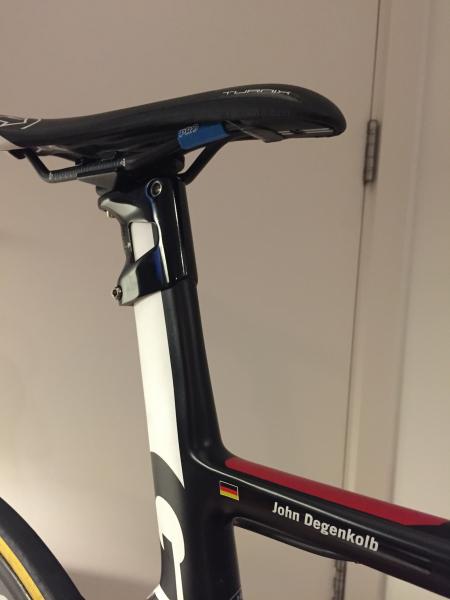 The bike is described as being in excellent condition, save for some marks as you would expect of a race bike. The Propel is Giant’s aero road bike and it’s equipped with a Shimano Dura-Ace Di2 groupset with a 52/36t chainset and 11-28t cassette. The Shimano theme continues with the Dura-Ace C50 carbon wheels, Pro Vibe carbon 140mm stem and Pro Turnix carbon saddle.

John Degenkolb is 5’11” and the bike is a size medium (54.5cm). The seller, who tells road.cc he won the bike in a competition recently but is too tall to fit the bike, is looking to sell it to a good home. He’s asking £4,999 for it. He's throwing in a signed jersey as well, so you can look the part.

Here’s the advert in full:

I have for sale a Giant Propel Advanced SL ridden by John Degenkolb himself at the end of 2015. Now, you might wonder what I’m doing with this beauty, the fact is I won it in a competition a few weeks ago. The problem now is that because it’s Degenkolb’s actual bike I couldn't choose size once I won it so it’s unfortunately way too small for me. Mr Degenkolb is 5.11 (180cm) and I’m 6.5.

So, this bike deserves a better home where it will be ridden. It’s in excellent condition, you can see it has been used by a few marks on the bars and the wheels but the bike has been treated really well as expected by a pro team.

I will also throw in a signed jersey by Degenkolb as well as the water bottles. The only thing it won’t come with are pedals.