Plus news of the Arkose all-round road bikes, Neon flat bar road bikes, and the versatile Lithium
by Mat Brett

Pinnacle has revealed its 2016 range and the biggest change is that the Dolomite road bike switches from calliper brakes to disc brakes. We went to check out the lineup earlier in the week and here are the highlights.

Pinnacle has moved the Dolomite aluminium road bike to disc brakes for 2016, with just the £450 Dolomite One retaining traditional rim brakes. 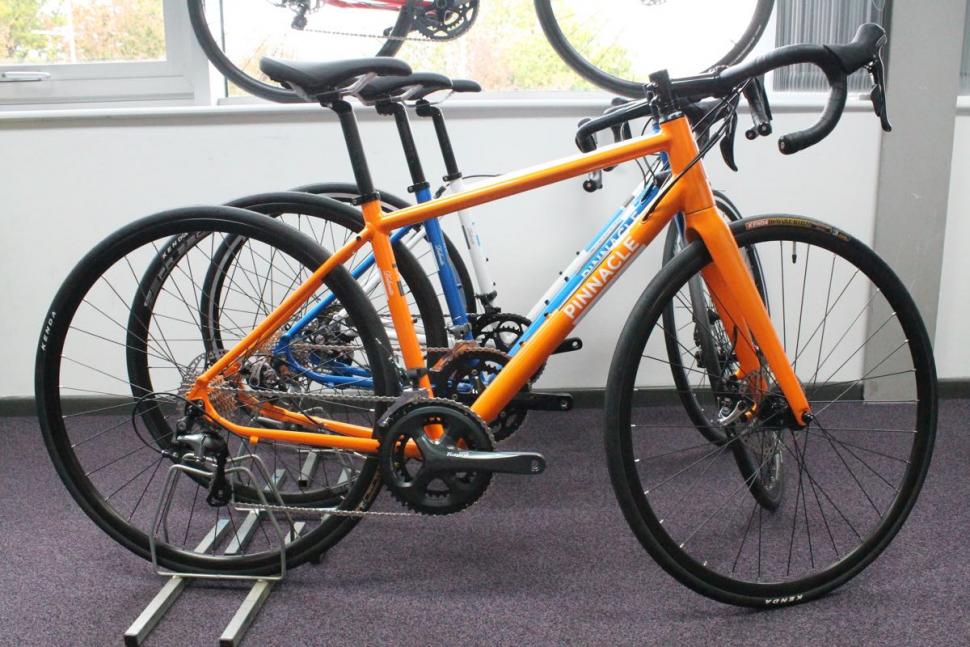 The Dolomite is designed as Pinnacle’s fast road bike, intended for year-round use in UK conditions, and the new disc models are built to almost the same geometry as previously meaning that you still get quite an aggressive setup. The medium model, for example, aimed at riders from 5ft 7in to 5ft 10in, has a 570mm stack height (vertical distance from the middle of the bottom bracket to the top of the head tube) and a 385mm reach (horizontal distance between those points). 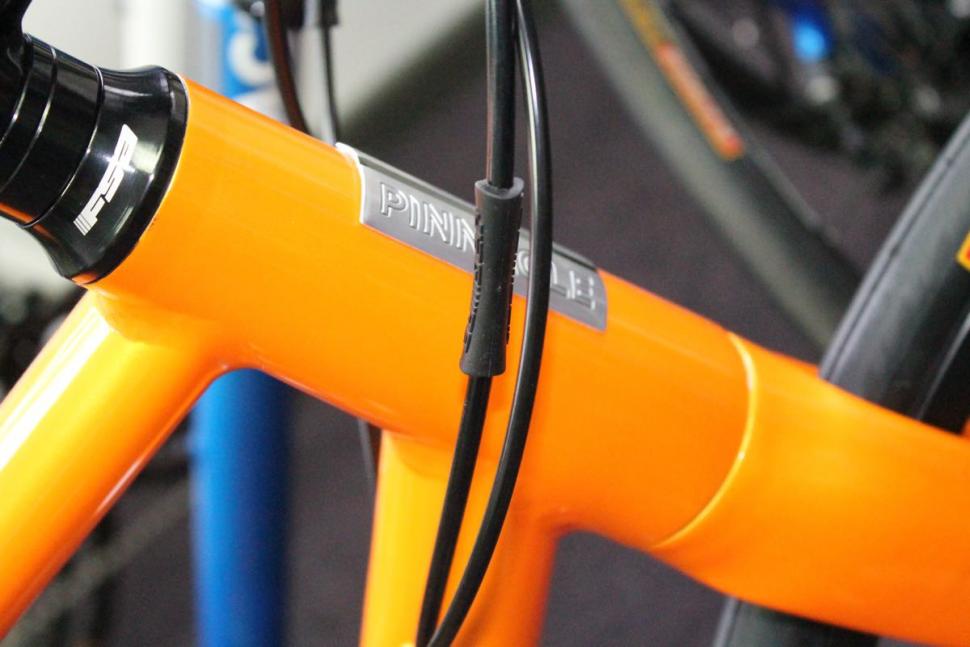 One minor tweak to the geometry is that Pinnacle has lowered the bottom bracket just a touch (it’s now a drop of 75mm rather than 70mm) to take account of the larger tyres that have become increasingly popular over the past few years. All of the Dolomites come fitted with 25mm tyres although you get enough clearance for 28s. Pinnacle uses BSA standard screw in bottom brackets, incidentally. 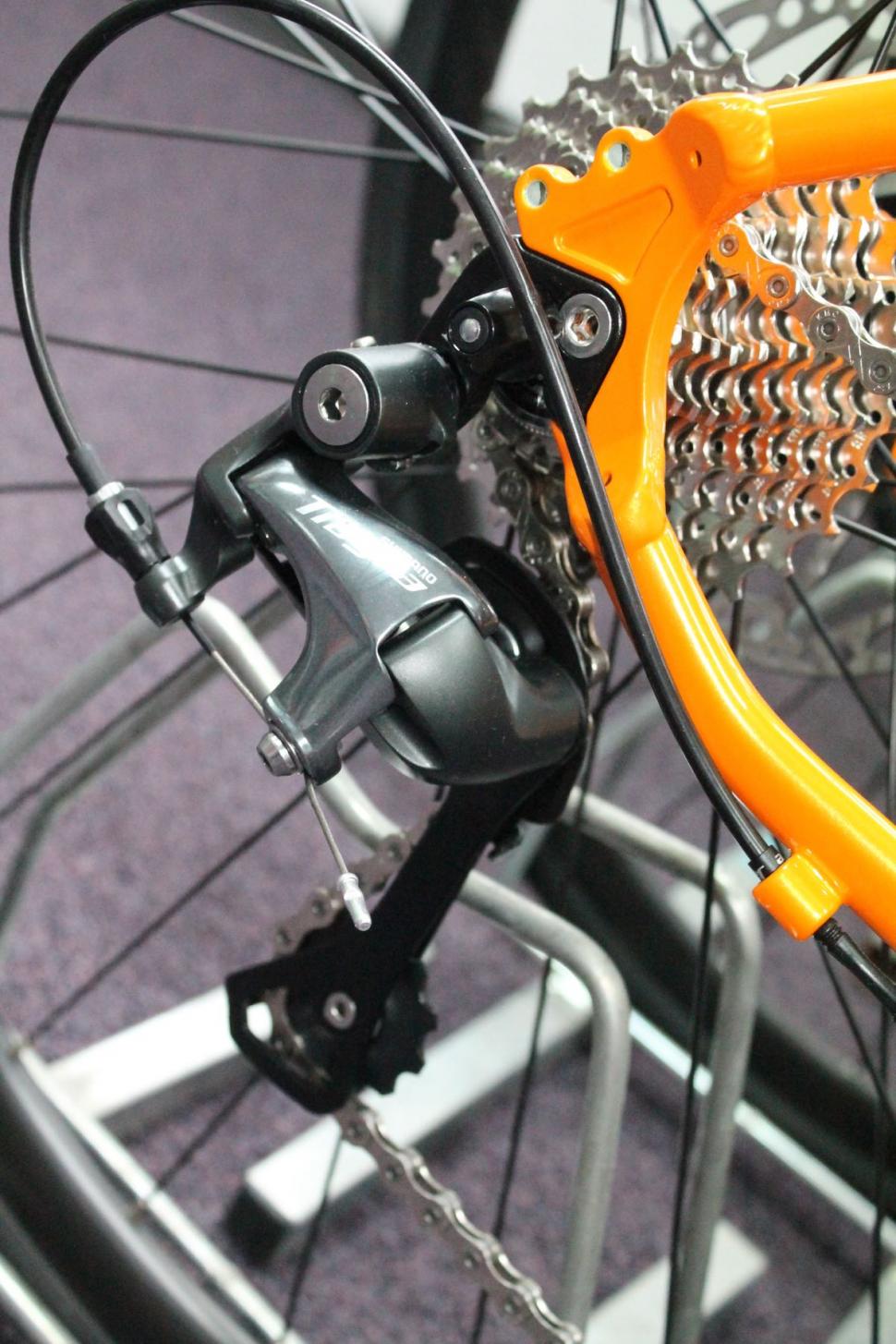 The frame is still made from 6061-T6 heat treated aluminium, double and triple butted, with eyelets that allow you to fit full-length mudguards (the maximum tyre size you’ll get with mudguards is 25mm) and a pannier rack easily. Cabling is fully internal (configured for a UK setup with the right hand lever operating the front brake) which not only looks neat, it adds a level of protection in grotty riding conditions.

Although we’ve not ridden any of the 2016 bikes, the star of the show looks to be the £1,000 Dolomite Five. This one comes with Shimano 105 gears, Shimano BR-785 hydraulic disc brakes and an FSA Gossamer chainset. That chainset is a compact (with smaller than standard 50/34-tooth chainrings) and the largest sprocket is 28T (as is the case with the other models in the Dolomite range), so the lowest gear is fairly small.

One compromise that Pinnacle has had to make in order to offer this disc brake bike at what looks to be a competitive price point is that the fork is no longer full carbon, it comes with an alloy steerer. The £450 Dolomite One is the entry-level model in the range (women's version pictured above, coming with an aluminium fork, Shimano Tourney gearing, and Promax calliper brakes. The disc models start with the £550 Dolomite Two (above). This has a carbon/alu fork, Shimano Claris groupset and Tektro Mira mechanical disc brakes. 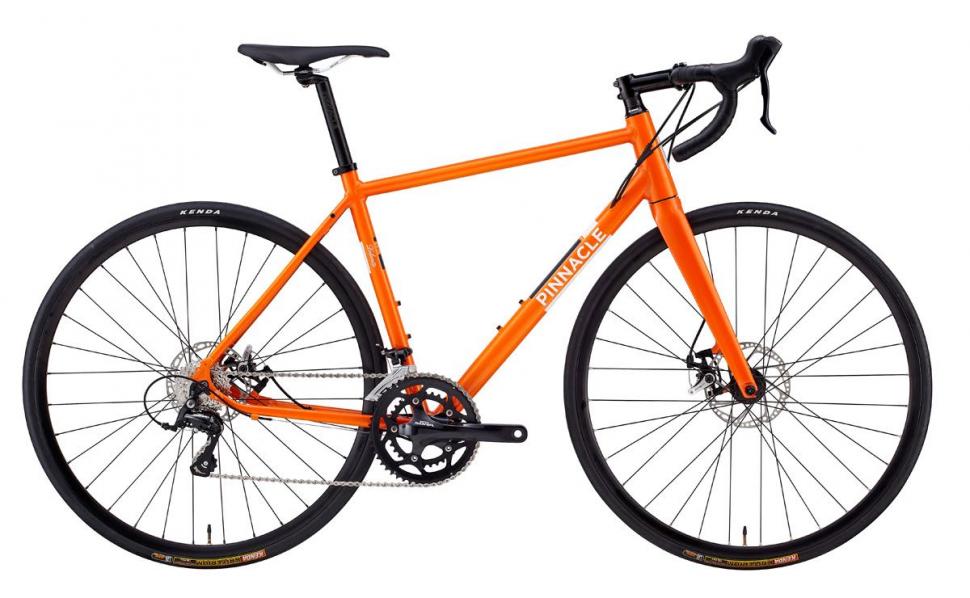 The Dolomite Three (£650, above) is a Shimano Sora build with Tektro Spyre mechanical discs while the Dolomite Four (£750, below) has the same brakes but other components from Shimano’s Tiagra groupset. 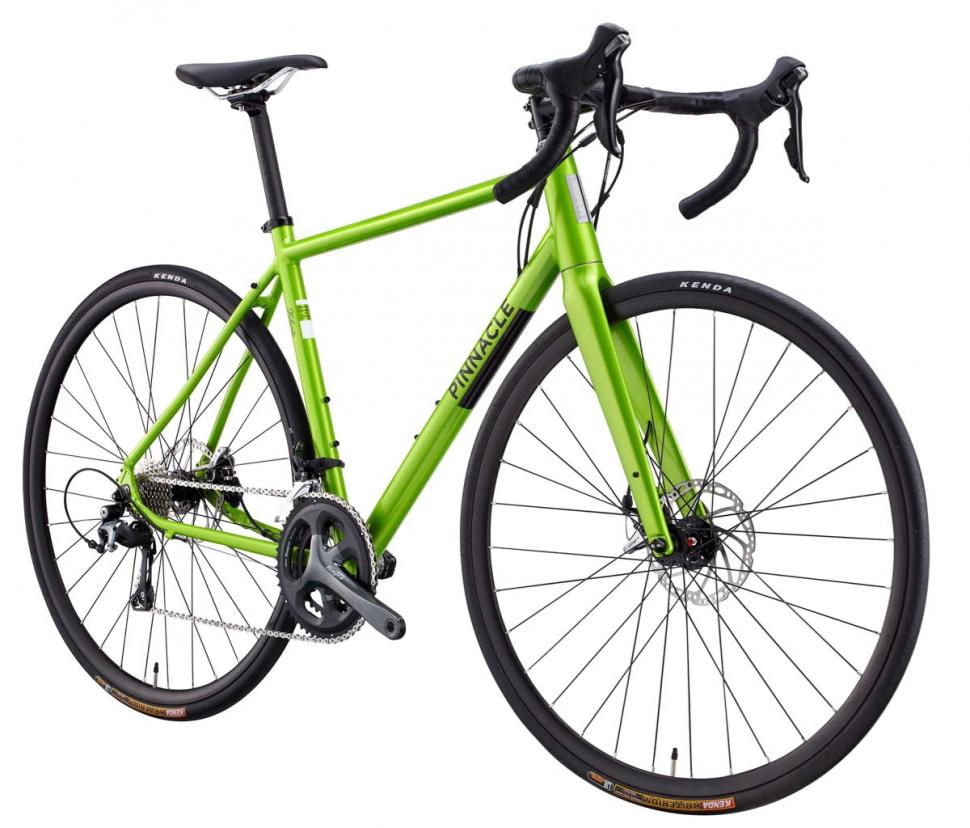 We’ve already mentioned the Dolomite Five, so that leaves us with the range-topping Dolomite Six (£1,250, below). This is the only one to come with a full-carbon fork. It also gets a Shimano 105 build with Shimano BR-785 hydraulic disc brakes. Domomite bikes are available in women’s versions too, with slightly altered geometries. Each one is built up with a shorter stem and cranks, narrower bars, and a women’s specific saddle, and there’s no pink in sight.

The Arkose was a traditional-style cyclocross bike with cantilever brakes when it was introduced in 2011 but it has morphed into a drop bar, disc brake, mixed use all rounder over time. Yes, that category is a bit of a mouthful but you know the type of thing: a versatile bike that can handle a bit of everything. The various models come with 35mm and 40mm tyres that are suitable for different terrains, but you could fit narrower tyres and mudguards if you wanted to use an Arkose for quick commuting, for example. 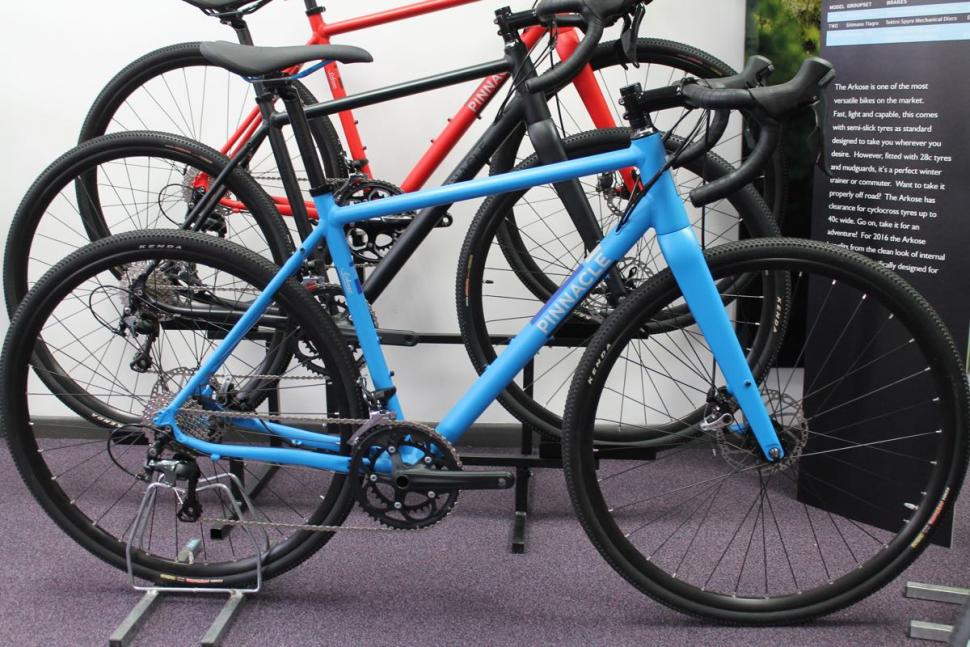 Like the Dolomite, the Arkose is made from 6061-T6 heat treated aluminium, double and triple butted, but it has a different geometry: the front end is a bit higher (the stack height is greater) and you get more fork offset, for example. The idea is that the Arkose handles more like a mountain bike. The welds are smooth, the cabling is internal, and you get eyelets for full-length mudguards along with fixings on the down tube for a Crud Catcher-type guard. There are eyelets for a rear pannier rack too. 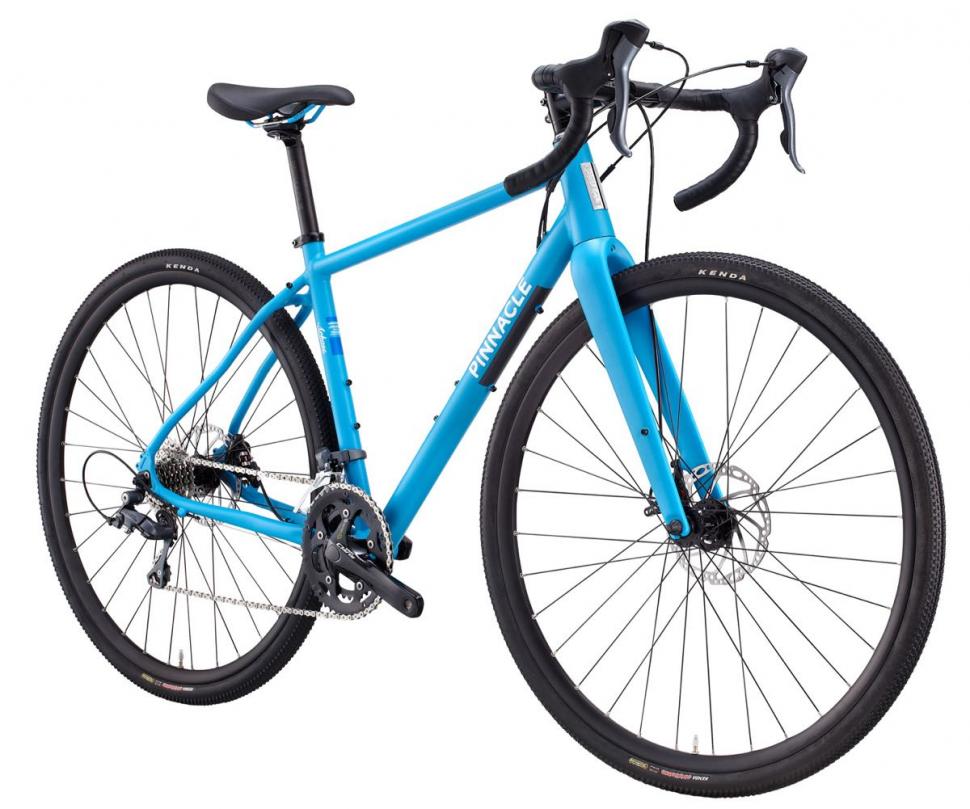 The cheapest model in the range is the £700 Arkose One. This is built up with a carbon blade/alloy steerer fork, a Shimano Claris nine-speed groupset and Tektro Spyre mechanical disc brakes. 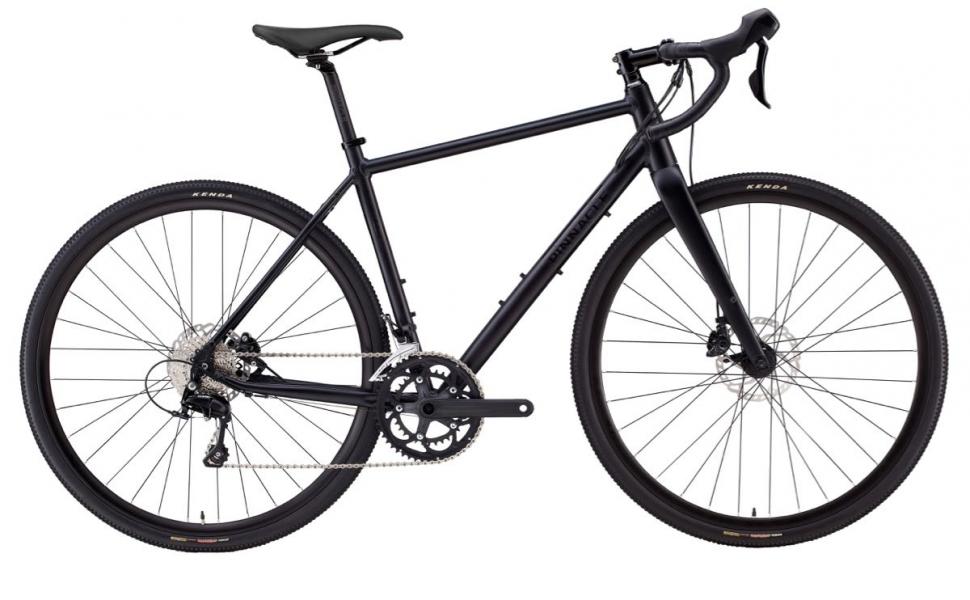 The £1,000 Arkose Three looks like exceptional value. This one comes with a Shimano 105 groupset – the compromise being the Samox alloy chainset – with RS-505 shifters and BR-785 hydraulic disc brakes. The £1,300 Arkose Four is the only model in the range with a full-carbon thru axle fork. This one gets Shimano RS-685 shifters and BR-785 brakes. 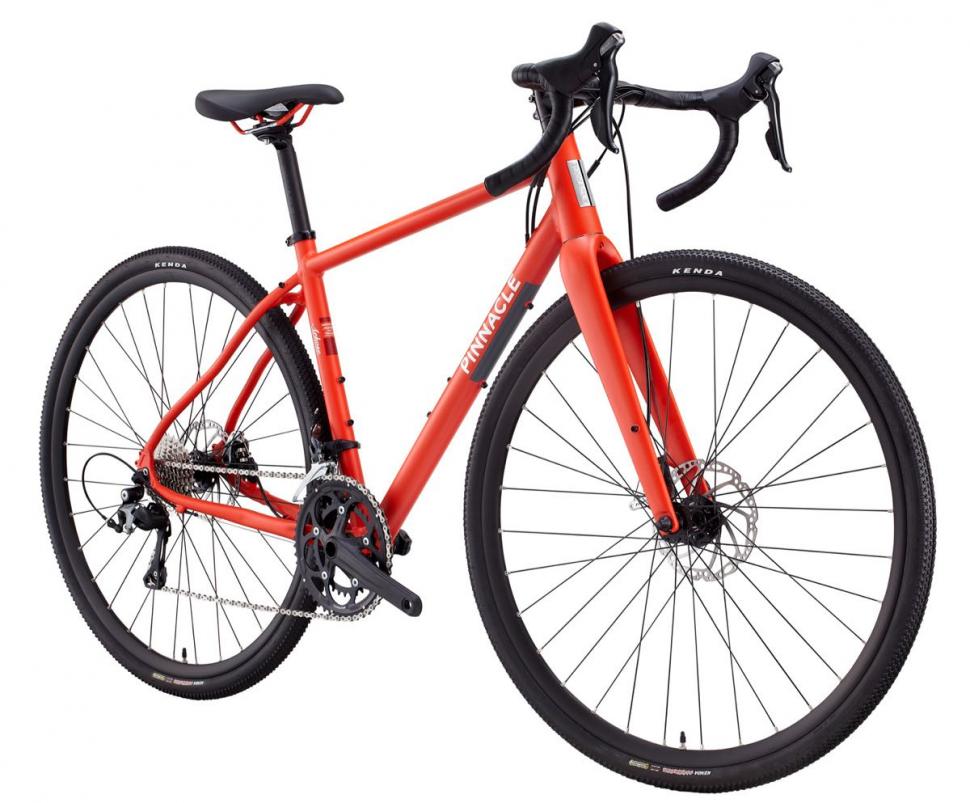 There’s a cromo steel Arkose on the way too, although Pinnacle isn’t sure exactly when it’ll be available.

The Neon is a flat-bar road bike, designed to be a lightweight and quick around town, and for weekend rides on the road, towpath or whatever. Each of the models comes fitted with 28mm tyres but Pinnacle says you can fit anything up to 40mm. 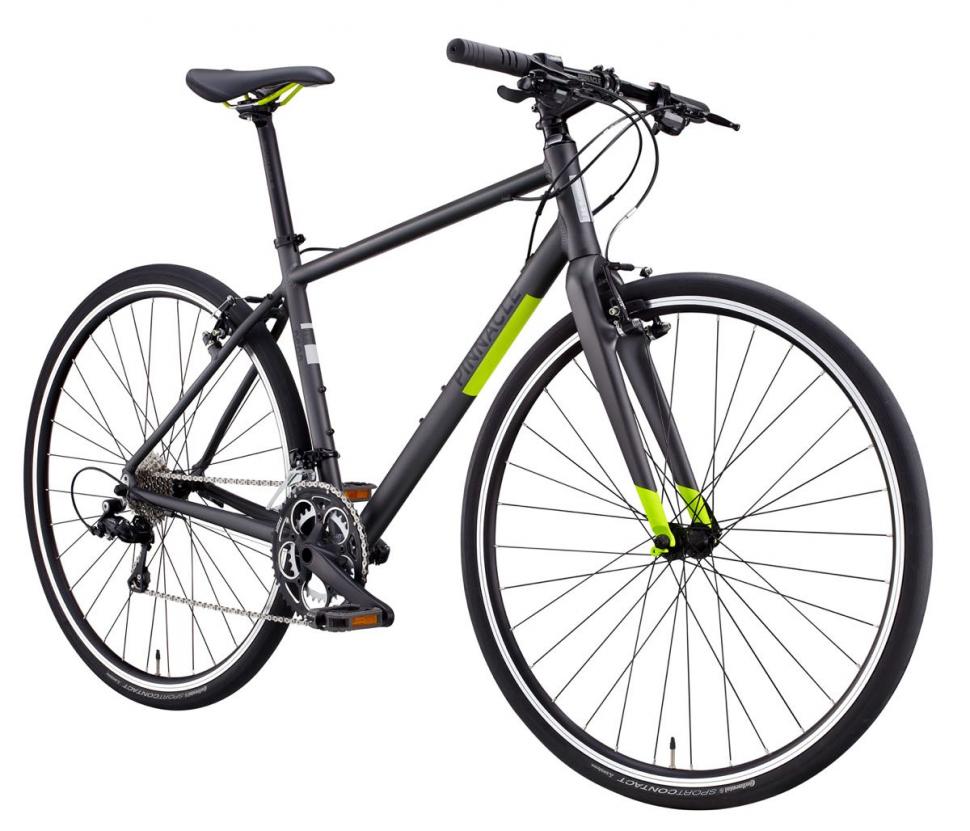 The frame is 6061-T6 heat treated aluminium and the fork is either aluminium or aluminium/carbon, depending on the model you go for.

We like the look of the Neon Three (£550) which comes with a mainly Shimano Sora groupset (Samox alloy crank) with Tektro RX1 mini V-brakes.

The Lithium is another 6061-T6 aluminium flat barred option in the Pinnacle range but it comes from more of a mountain bike angle so it’s designed to be more ruff ’n’ tuff. 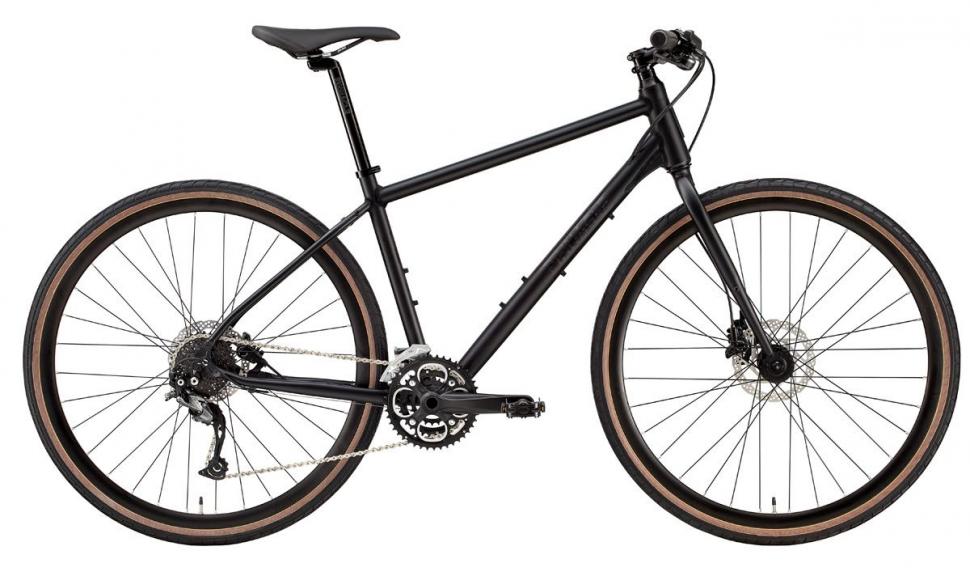 The £600 Lithium Five is equipped with Shimano Alivio/Acera components and Shimano M355 hydraulic disc brakes. You get chunky tyres here – 38mm – along with eyelets for full-length mudguards, a Crud Catcher, and both front and rear racks.

For more info go to www.evanscycles.com.