8
10
Good be-seen-by secondary light solution with unique mounting design for keeping handlebar clutter to a minimum
Good performance as a light to be seen by
Helps to free up space on handlebars
Easy to mount
Good battery life
Wahoo users will need to be prepared to buy a Garmin mount to use it
Does not fit all Wahoo computers
No mode memory
Low battery warning not very obvious
Weight:
45g
Contact:
fabric.cc

The Fabric Lumaray V2 is a good 'be seen by' light, for those who value uncluttered handlebars. However, Wahoo users will need to buy a Garmin mount, and it doesn't fit all Wahoo computers.

The Fabric Lumaray V2 is an interesting and unique proposition, a small form factor light that integrates by sandwiching neatly underneath a cycling computer.

The box states in three places that it 'Fits Garmin and Wahoo Cycling computers', and as I own both, I was excited to try it out to see how it worked with each of them. However, the initial setup is definitely biased more towards Garmin owners, and I will try to clarify and explain this before proceeding with the rest of the review. 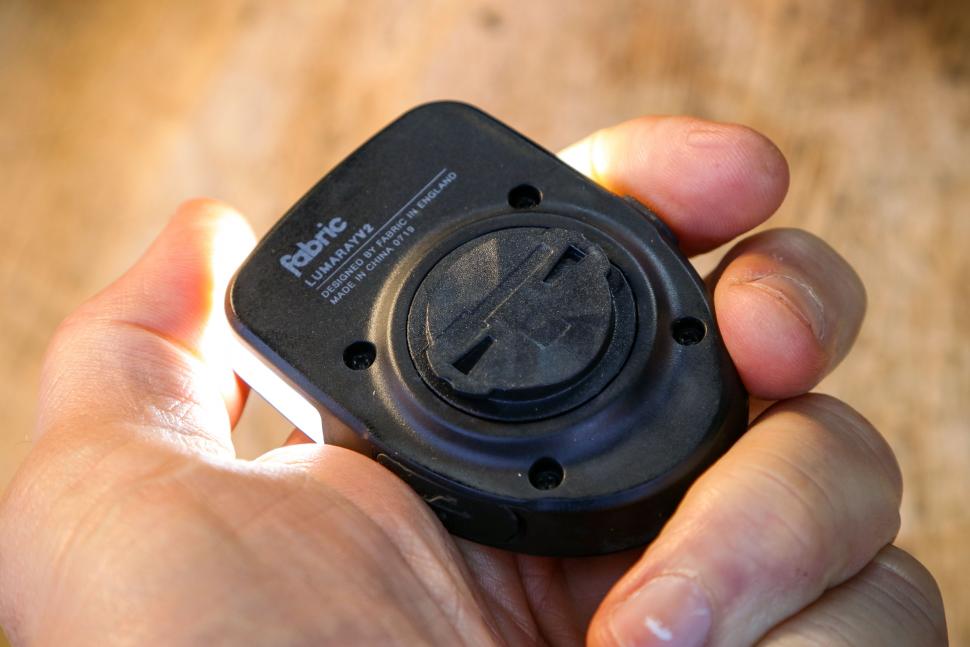 Also, the Lumaray as supplied does NOT fit a Wahoo Elemnt Bolt or Wahoo Elemnt Roam. This is because, unlike a Garmin, the Wahoo computers have an additional curved lip on the underside that means they cannot fit into the top of the Lumaray. I understand that Fabric may be able to supply an separate adaptor to enable them to fit, at additional expense. 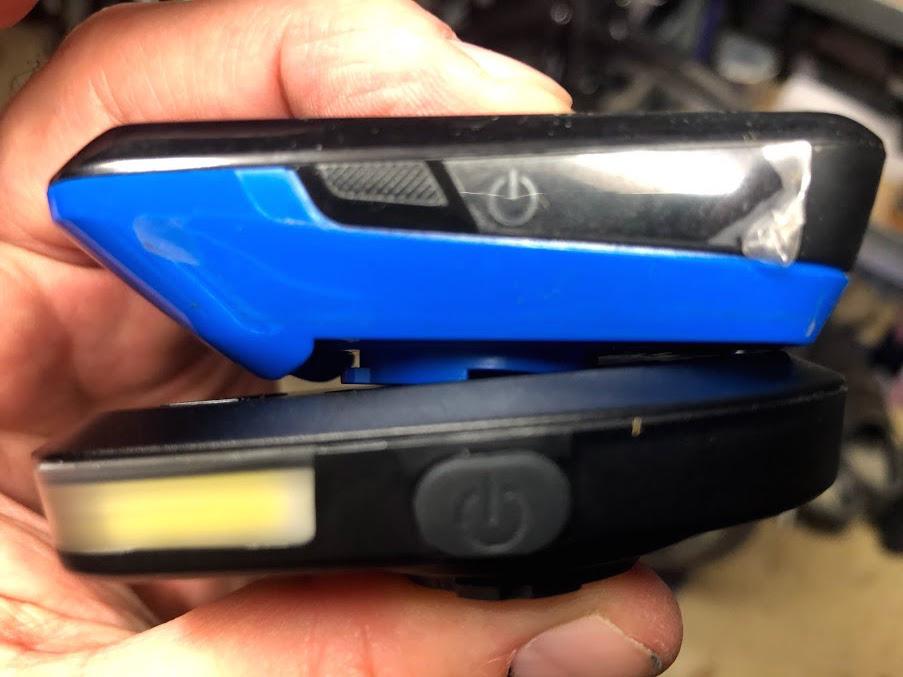 It would have been good if the packaging made this more obvious for potential buyers. 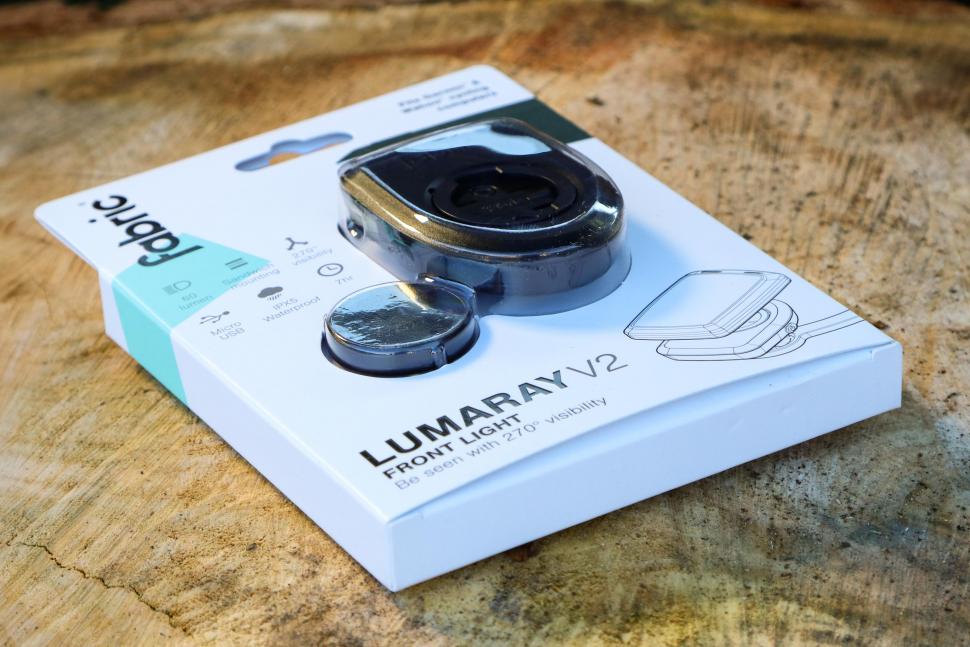 So, with those important Garmin/Wahoo caveats out of the way, the review can continue...

The Lumaray has a plastic construction and feels well made, and if using a Garmin or a compatible Wahoo, is a nice tight fit onto the top mount; fit and strength of the unit were improvements made to the V2 version. 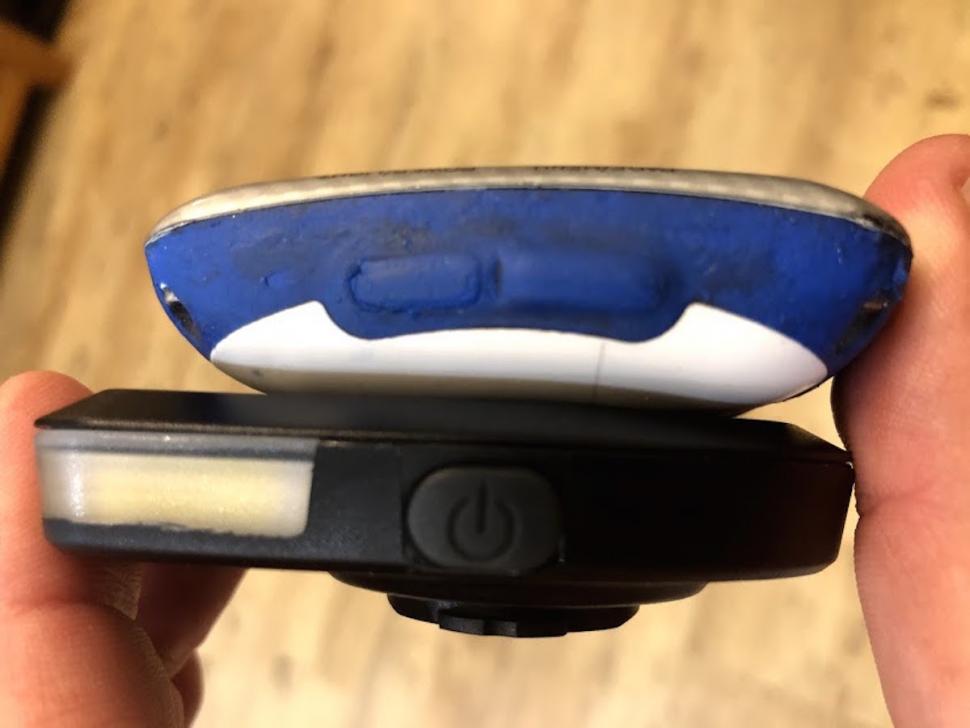 I tried mounting it to an official Garmin mount, and a SRAM-branded Garmin mount, and it stayed put for the six weeks of testing. Fabric recommends using a leash on your Garmin or Wahoo to tether it to the mount just in case. At only 45 grams, it's not a weight you notice.

To swap between a Garmin or Wahoo, Fabric includes a swappable 'puck', which unbolts from the top of the unit, and is swapped for the relevant brand computer. In use, there is just the single button on the side. To turn the Lumaray on, hold the button down for three seconds, which takes it into flashing mode. Continue to press the same button to cycle through two different flashing modes and two different steady modes, of high and low brightness. Hold the button down for three seconds to turn the unit off.

It doesn't have a mode memory – you have to press the same button to cycle through them until you get to your favourite.

Performance is really good for a such a small form factor light. With 60 lumens, it is a 'be seen' light, not one to see by in the pitch black, but I found that for early morning, and dusky evening commutes, it was very good. I found it made a good secondary light in conjunction with my main light, which I would keep on steady beam, with the Lumaray on flash mode.

The 270 degrees of visibility means you can be seen pulling up to junctions, as the LEDs curve around the front of the unit, with a bright uniform glow. I tended to keep it on the steady low mode if on a cyclepath, and one of the flashing modes if I was on the road.

It is easy to press the button while cycling along to switch modes, even with gloves on, as the button protrudes and is easy to feel, with a tactile click.

Battery life is good. Fabric claims the Lumaray V2 can last 7 hours on the steady flash, 7.5 hours on the disrupt mode (a slow flash, followed by a really fast flash), 7.5hrs on low, and 2 hours on high. I found these claims to be spot on. The low battery indicator is a very faint red light on the power button.

Time to recharge from an absolutely discharged flat battery was just over 2 hours. Of note is the USB charger cable it comes with – it's a high quality woven one.

The Lumaray V2 has stood up to several soakings, either in rain or when washing the bike. Being IPX5 rated means it can withstand a low pressure stream of water, and I had no concerns about water ingress. The USB port is shielded by a deep-fitting rubber flap.

Value-wise, at £35 RRP, the Lumaray is fairly expensive for a be-seen-by light. As a Wahoo user, you need to purchase a Garmin mount to use it, and these tend to be around £12 to £20, which adds significantly to the cost.

Looking at other small form factor lights on the market, the Giant Recon is a similar price, also has 270 degrees of visibility, but a much higher 200-lumen output. It can also be mounted vertically to take up less space on the bars.

The Exposure Trace Daybright is a similar size, but 110 lumens for a tenner more. Our reviewer noted that in a pinch it could just about 'get you home'. GoPro adaptors can also be purchased for the Exposure if your cycling computer mount has an additional GoPro mount underneath, to give a similar solution to the Lumaray V2.

In summary, the Fabric Lumaray V2 is a very good be-seen light solution with a unique mounting design. If keeping handlebar clutter to an absolute minimum is a priority, and you own a compatible Garmin or Wahoo cycling computer, then the Fabric Lumaray V2 should be on your shortlist as a secondary light.

Fabric says, "Make yourself noticed with 270° visibility from high-powered LEDs. The wrap-around lens enhances your side visibility and improves safety in low-light conditions.

"Cut out clutter on your handlebars with a light that sits seamlessly between your computer and its mount. The Lumaray V2 shares the same 1/4 mount as Garmin devices, making it easy to fit too."

I agree with what Fabric says about the Lumaray, it leaves the bar of the bike uncluttered, and is certainly visible from the sides as well as the front. It is intended for use as a secondary light.

USB rechargeable - Time to charge measured as just over 2 hours.

The plastic construction of the Lumaray feels well made, and if using a Garmin or Wahoo, is a nice tight fit onto the top mount. I didn't drop it during testing, so can't comment on its ability to survive being dropped.

No mode memory, you have to press the same button to cycle through them.

Side button is easy to find with gloves on, with a tactile click.

It works well attaching it to various Garmin mounts. I used an official Garmin mount and a SRAM branded Garmin mount and both worked well. Attaching a Garmin to the top is a nice, tight fit, and it stayed put during the six weeks of testing.

The Lumaray has stood up well to a good soaking in rain and when cleaning the bike all over, and is well sealed. It is IPX5 rated, meaning it can withstand a low pressure jet spray of water.

Battery life is good – Fabric claims it can last 7 hours on the steady flash, 7.5 hours on the disrupt mode (a slow flash, followed by a really fast flash), 7.5hrs on low, and 2 hours on high. I found these claims to be spot on.

Time to recharge - just over 2 hours.

As a "be seen by" rather than "see with" light, the Fabric Lumaray V2 does a good job, considering it is such a small size. I was surprised by how bright it is.

The Lumaray seems like it should last a good while.

At only 45g, it's not something you notice on the bike at all.

I would say the Lumaray is fairly expensive for a be-seen light, at £35, though other see-by lights can be had for a similar price. However, the ability to integrate into a Garmin mount is unique, so for those who value an uncluttered cockpit, it ups the value.

As a be-seen-by light it is certainly adequate, and is super-simple to fit. Decent battery life and great performance for such a small form factor.

Ability to integrate into a Garmin mount so quickly is unique. For such a small form factor it is surprisingly bright, and the battery lasts well.

Wahoo owners will need to buy, or already own, a Garmin mount, which could add significantly to the cost. I feel the packaging needs to be improved to explicitly mention the need to own a Garmin mount, and the exact Wahoo models that the Lumaray V2 is compatible with.

Slightly more expensive than the competition, which have more lumens for similar money.

Would you consider buying the light? Yes, if I mainly used Garmins. If I was a Wahoo user, possibly not.

Would you recommend the light to a friend? If they use a Garmin, then yes. If they use Wahoo, then caveats mentioned in the review would apply.

For a Garmin user, it's a 9, for a Wahoo user, it's a 6 because of the need to purchase a Garmin mount, which adds significantly to the cost. I'm going with an 8 for the overall score.