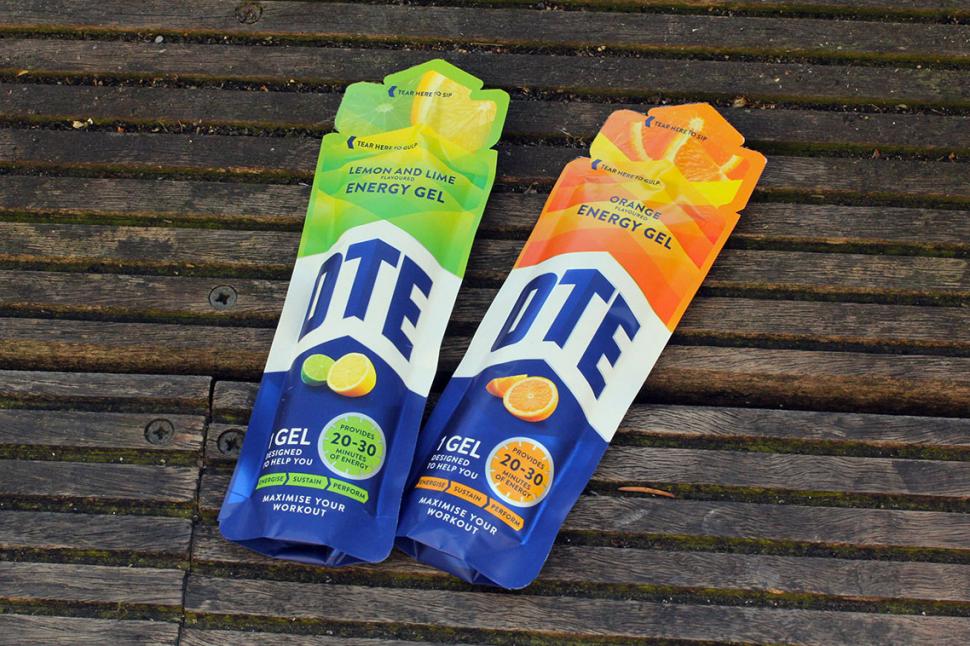 7
10
Distinctive flavour, fair price and all natural ingredients, plus some clever packaging
Weight:
56g
Contact:
www.otesports.co.uk
How we test

OTE is a new range of nutrition products aimed mainly at cyclists and triathletes, including these energy gels. They're entering a crowded market place but the OTE gels do stand apart from some competitors thanks to their distinctive taste, the fact that they're made from all-natural ingredients, and their neutral PH balance to help reduce the stomach discomfort.

OTE stands for On The Edge, a new company aiming 'to be the brand that delivers both functionality and taste', as previously reported on road.cc, and they certainly do that with these gels.

On taste, the flavours available are Vanilla, Lemon & Lime and Orange. We tested the latter two. The taste is pleasant and distinctive, not strong, bitter or acidic, and not as tangy or zesty as some other brands. Whether that's a good or bad thing comes down to personal taste. Personally, I found it just right.

The consistency is on the liquid side; not as drink-like as High 5 gels but not as thick as, for example, ZipVit or Mulebar Kick gels.

On functionality, each gel contains 20.5g of carbohydrate, and provides 82Kcal. Depending how hard you ride (and on other factors such as physiology) that's enough carb to keep you going for about 20 to 40 minutes. I tested the gels on a long hilly ride around Cornwall (and, boy, was it hilly), taking one every half-hour, and found they powered me along nicely.

The neutral pH recipe seemed to work as well. After consuming a few of these gels, there was no sign of any bloating or other stomach discomfort.

According to the packaging, the main ingredients are water, maltodextrin, fructose and fruit juice concentrates. The gels also contain 'balanced electrolytes' - a pinch of sodium and magnesium – which 'help to promote fluid uptake, so you remain hydrated during exercise'.

So far so good, but it's worth noting that the gel itself weighs 56g, so for every 20g of carb you're carrying another 26g in your back pocket. OTE gels are not unique here - the same kind of ratio is found in some other very popular gels - while others have a much higher carbs-per-gram ratio, which other riders prefer.

The OTE energy gel is also available in a pineapple flavour, with the same carb content plus an additional 50mg of caffeine. The favour is mild, and not surprisingly doesn't have the citrus notes of the Orange and Lemon & Lime gels. I was expecting a coffee taste, but it doesn't have that either; the caffeine is derived from guarana – a South American plant, with beans that have a higher caffeine content than coffee. I used one of these caffeine gels on the last few miles of my Cornwall test ride (that monster out of Newlyn, for those that know the area) and it definitely gave me an extra kick.

The OTE gels are free from artificial flavouring, colouring and sweeteners. They're also gluten free, dairy free and kosher, and suitable for vegetarians and vegans.

Finally, a note about the packaging. OTE gels have two openings: a small one if you prefer to sip or you're refuelling on the go and don't want gel all over your track-mitts; and a large one if you're off the bike or just prefer to get the stuff down in one gulp. It's a small touch, but an excellent idea.

On price, these energy gels retail at £1.35 each on the OTE website. The caffeine version is £1.75. This is roughly on a par with the price of gels from other manufacturers, and somewhere half-way along the scale on a crude carbs-per-quid basis.

But as with all energy products, for most cyclists is doesn't just come down to price or the carbs-per-gram ratio. It comes down to more personal considerations such as taste, texture and impact on the stomach – all positive in my opinion, and on that basis I'd recommend giving OTE gels a try. If they work for you, stick with them. If they don't, then no harm done.

Energy gels with distinctive flavour, fair price and all natural ingredients, plus some clever packaging.

This product is a carbohydrate based energy gel, designed to refuel cyclists on longer rides (ie over an hour or two). The manufacturers website says OTE gels are

'...easy to use, contains carbohydrate and balanced electrolytes to deliver energy to your working muscles when they need it most. Professional athletes use energy gels when they need 'instant' energy or when the intensity of the exercise requires more carbohydrate. OTE Energy Gels have been designed to be light on the stomach; made with real fruit concentrates, they not only energise and taste delicious, but also prevent stomach discomfort caused by many other commercially available gels.'

Light on the stomach

Free from: artificial sweeteners and colours

As always when trying a new product, test these gels while training first (don't use them for the first time during an important race or sportive) just in case they don't agree with you.

The packaging is a stangard gel sachet, with the clver addition of OTE's "Duel Delivery System" - fancy name for two different openings ('sip' or 'gulp'), which is a very neat idea.

Performance is very good: Each gel delivers 20g of carb, which was enough to keep me going for about half-an-hour's hard riding befor needing another.

Each gel weighs 56g, and contacts 20.5g of carb. This means you're carrying 25g of water or other stuff in your back pocket, alongside the carb you need. This is no problem if you like a gel on the liquid side, but it's a lot of extra bulk if you're carrying enough gels for a long ride, and some riders may prefer a higher carbs-per-gram ratio.

On price, these energy gels retail at £1.35 (or £1.75 for the caffeine version) which is fair, but not a bargain. It's roughly on a par with the price of gels from other manufacturers, and somewhere half-way along the scale on a crude carbs-per-quid basis. By way of comparison:

The product performed very well, in that it tasted very nice, caused no stomache issues, and powered me along very nicely

Personally, the carbs-per-gram ratio is a bit low for me. I prefer to use gels which deliver more carb and have less extra ingedients in my back pocket. While the liquid may be a useful addition to that in the bottles, on a long ride it's a simple matter of space.

Would you consider buying the product? personally no - I prefer a higher carbs per gram ratio

The OTE gels enter a crowded market place, but their distinctive taste, pleasant texture and use of natural (and pH neutral) and ingredients set them apart from some competitors. The dual oening is also handy. As a very good provider of carbohydrate there's no argument, and these gels would score 9 on that basis, but the carb-per-gram ratio is a bit low and the price isn't a bargain, meanining a couple of points docked, giving an overall score of 7.