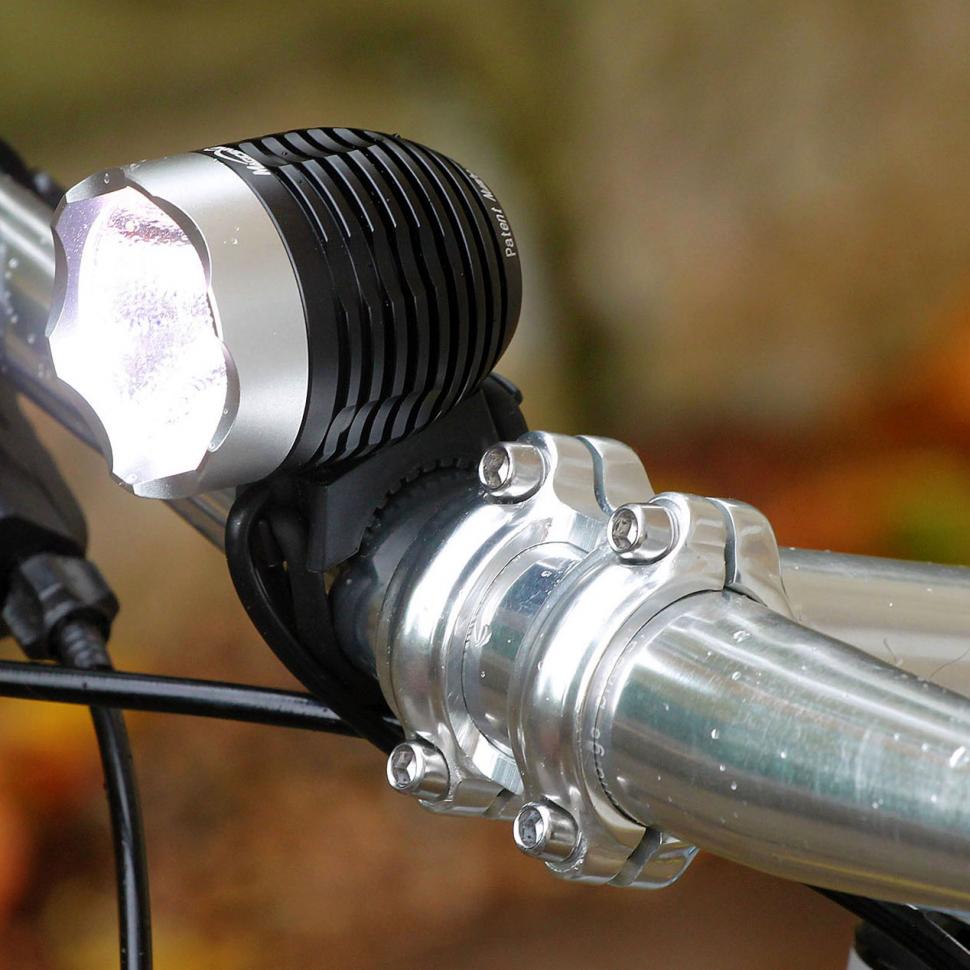 8
10
Versatile on or off the road, belting out a lot of lumen for your cash
Weight:
367g
Contact:
www.magicshineuk.co.uk

At a claimed 1000 lumen output, the Magicshine MJ-808E easily trumps most of the established competition in terms of power to price ratio. Reliability, often a cause for concern with cheaper Eastern lights, has improved in recent times with UK distributors offering a 12 month warranty on all parts. From a numbers point of view, the MJ-808E really has a lot going for it.

The light and battery pack come as separate pieces to be hooked up via Magicshine's own proprietary cable connection. Machined out of aluminium, the light head is robust but lightweight, and includes a number of cooling fins to aid heat dissipation. A single push button at the rear is used to switch between power modes and turn the light on or off.

The mounting mechanism consists of a simple industrial o-ring which is provided in 2 sizes, presumably to fit 25.4 and 31.8mm diameter handlebars (though we did have some issues with sizing as detailed below).

The 4.4AH Li-ion battery claims to provide 160 minutes of juice at maximum power and comes with its own fabric pouch which can then be easily secured to the frame using 2 Velcro straps. These are both capable of wrapping around a modern 'oversize' downtube with plenty of Velcro engagement. The battery itself is rubberized to waterproof it and provide some impact absorption. Aftermarket batteries from German company 'Open-Light' can be purchased through the distributor at additional cost if run-time is an issue. Charge time is around 4 hours though you wouldn't want to let the battery get that low in the first place.

Used as a helmet light, the stock cable isn't long enough to fit into a rear pocket, so you'd have to find some way of stowing it in a rucksack. Extension cables are available if you intend to use the MJ-808E in this way, but the beam pattern doesn't lend itself to helmet mounting anyway.

In the bar mounted configuration, the cable becomes a bit of an annoyance as you end up having to wrap it around the stem and handlebars to take in the slack. Not a major issue in the grand scheme of things, but it will make your cockpit look messy. Those with OCD beware.

On the road, the sheer illumination achieved is very impressive, but the beam pattern is very wide, with lots of light being thrown up and off the tarmac. For road riding, this isn't terribly useful as typically a beam with lots of reach is required, to deal with the high speeds. The MJ-808E overcomes this issue by just putting out more power – it's not subtle, but it works.

Another reason for a more focused beam is that it prevents oncoming road users from being blinded by the light. This is a real issue with the Magicshine, so best to save that mode for deserted roads. The low power level is plenty though for most road riding at speeds of around 20mph which is about as fast as you tend go on unlit urban roads.

Taking the light off-road, the MJ-808E's spill really comes into its own as a bar mounted light. Here, peripheral vision is more important and speeds are generally lower, requiring less reach. As a dedicated road light, the MJ-808E may not be perfect, but if you happen to enjoy the occasional night time mountain bike adventure, then it works well.

The obvious cost cutting measure on the Magicshine is the rather simple control board which offers up 3(and a half) different lighting modes – less than most of the competition from more established names. However, we find that high-low-flashing (plus an SOS mode should things get really hairy) are all you really need for the vast majority of riding anyway. Switching between modes is achieved by a short press of the rubberised button on the back of the unit. This was quite hard to press successfully with gloves on, often requiring 4 or 5 presses just to switch mode once. It also requires quite a lot of force to engage the switch which can result in rotating the light with each press.

Speaking of rotating lights, the light head had an annoying tendency to rotate forwards when bouncing over rough terrain (think mountain bike trails on a cross bike). A switch to the smaller o-ring solved this issue, though it made swapping the light between bikes a little more fiddly. If your bike has 25.4mm bars, then you might find that the small o-ring doesn't provide enough force to hold the thing steady.

Having noted the limited operational modes, the Magicshine does include a multi-colour charge indicator led which shines through the mode button. This shines green, blue, orange or red depending on charge level. A recent 3 hour night ride was completed off a full charge (with most of that time being on full power) without discharging the battery all the way down to the red, 'warning' level.

Over the past month, we've put the Magicshine through its paces on numerous muddy off-road night rides, one of which included near continuous rain for 2 hours, and it's not missed a beat.

As a lumen per pound exercise, the Magicshine scores very well and is ideal for anyone looking for a versatile light for both on and off-road night riding. For something more refined, look elsewhere, but be prepared to pay for it.

Versatile on or off the road, belting out a lot of lumen for your cash.

The MJ-808E is ideal for anyone looking for a powerful light without breaking the bank. It's Magicshine's best selling light though it's been upgraded with Cree's newest XM-L LED

The light head looks and feel well made. The connections and battery are well sealed and have performed well during the test

The MJ-808E wins in terms of the simplicity of its power modes, but the fiddly button lets it down a bit

The o-ring design, though simple and easy to swap between bikes, is prone to slipping over rough terrain. Using the smaller of the provided sizes with our 31.8mm bars solved this problem though.

No issues so far despite some atrocious riding conditions.

The claimed battery life looks to be accurate. If more run time is needed, larger aftermarket batteries can also be purchased.

The light is well made as hasn't skipped a beat yet.

It's hard to find a better value light out there. Sure, there are cheaper options, but maybe not with a 12 month warranty on all parts through a UK distributor.

I regularly do the following types of riding: road racing, sportives, mtb,