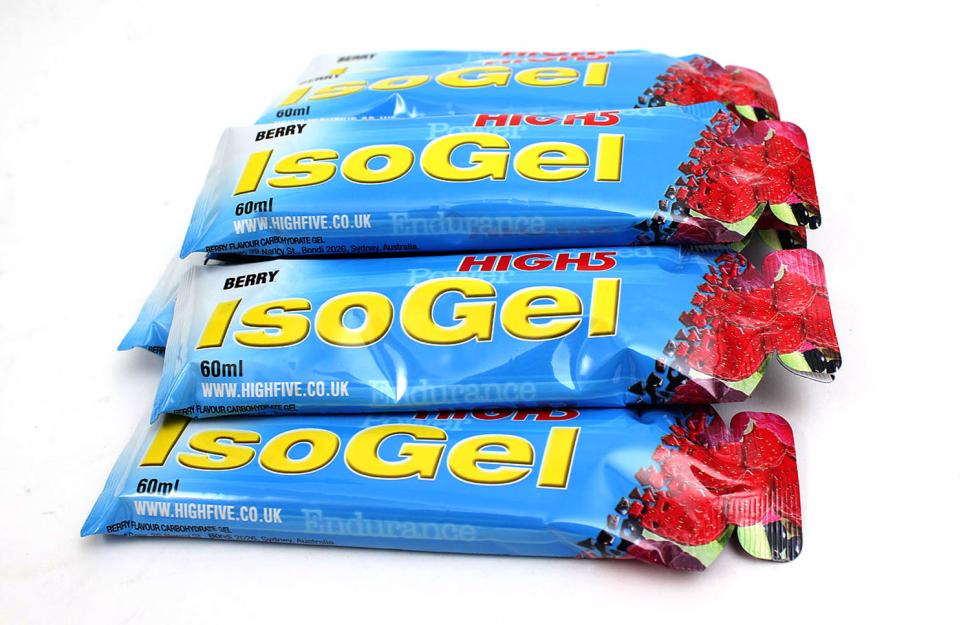 6
10
An energy gel that's more like a sports drink in a sachet, but of limited use to most cyclists
Weight:
1,826g
Contact:
www.hotlines-uk.com
How we test

High5 IsoGel is not really a gel at all. Despite the name, it's a liquid. So it's a carb-based sports drink in a gel-style sachet. Thus, it delivers energy and hydration - unlike normal gels where you need to take on liquid separately - but it's of questionable benefit for most road cyclists.

Either way, the main ingredients include water, glucose and fruit juice. The texture is - as you might expect - just like watered-down fruit juice. The taste is not sweet at all, making this drink very pleasant and refreshing.

Isogels are also available in a 'Plus' version, where the standard ingredients are joined by 30mg of caffeine. According to High5 website this will 'enhance performance and improve carbohydrate uptake'.

I have tested several sachets of standard IsoGel and Isogel Plus on some long rides, and they definitely work, but I found them no better or worse than High5's other energy gels (reviewed elsewhere on road.cc) which contain a similar amount of carb - 20g - but without the additional 40g of water.

So while these Isogels might be a neat idea for runners, I don't think they're any more useful for cyclists than 'normal' gels - assuming you've got a bottle on your bike. In addition, the Isogels weigh more than a normal gel with the same amount of carb content, they're more bulky in your back pocket, and they're hard to consume on the go as the fluid escapes easily from the sachet.

Having said that, I suppose it might be useful to carry one or two Isogels in case your bottles run dry in the last 10 miles of a long sportive. Also, some riders may prefer the taste and consistency of Isogels compared to normal gels, but if you struggle with normal gels and want something more liquid, then you're probably better off just using a carb-based energy drink in a bottle.

Isogels retail on the High5 website for £24.75 plus £5.75 postage for a box of 25 gels. This works out at just over £1 per sachet, and you can find them cheaper at your local bike shop or the usual on-line stores, which makes them pretty good value on a crude carbs-per-quid basis.

An energy gel that's more like a sports drink in a sachet, but of limited use to most cyclists.

The High5 webiste says: "ISOGEL is a new type of energy gel that doesn't need to be taken with additional water. Just tear off the end and drink it neat. The clever part about ISOGEL is that it actually tastes and feels like a normal sport drink but still delivers 24 grams of carbohydrate per 60ml palm-sized sachet. It's not slimy, it's not like runny jelly and it tastes fantastic even in the later stages of racing or training."

This is all perfectly true, but most cyclists will probably find it easier to use normal gels for energy and normal bottles for hydration, rather than this combined method.

The High5 website goes on to say: "Like all High5 products ISOGEL has been extensively tested in the lab and with athlete groups who have given it a unanimous thumbs up. So no more waiting till the water station to get extra fuel on board, no more slimy tasteless jelly gloop, it really is just like a sports drink."

The sachets have a tear-off tab with indents, making them easy to open with one hand and a few teeth while on the go. However, it's also easy for the liquid escape, and spill all over your face and bike. I found that biting a small hole and sucking the liquid out can be a more successful method, but still got sticky hands afterwards. This bite-and-suck method also means you won't accidentally drop the tear-off tab, which might be a major plus for litter-conscious cyclists.

These gels definitely work. The standard version provides enough energy to keep you going for 20 to 30 minutes of hard riding, while the caffeine boost is noticeable and useful at the start or end of a long day out in the saddle.

These gels weight 60g, but provide only 22g of carb, which is a poor ratio compared to normal energy gels. Granted, this is not comparing like with like - the whole idea of IsoGels is that they offer liquid in addition to carbs - but as most cyclists have a bottle on their bike this is not really a benefit.

On a crude carbs-per-quid basis, this product is good value.

Both standard IsoGel and Isogel Plus definitely work, but I found them no better or worse than High5's other energy gels which contain a similar amount of carb - 20g - but without the additional 40g of water.

Did you enjoy using the product? Yes, but only just.

Giving the IsoGel an overall rating is difficult. There's nothing wrong with this product as a source of energy and hydration, so on that basis it would score an 8, but in my opinion it's of limited use to cyclists - it's relatively heavy, bulky and hard to consume on the go - which lowers the score to 6.