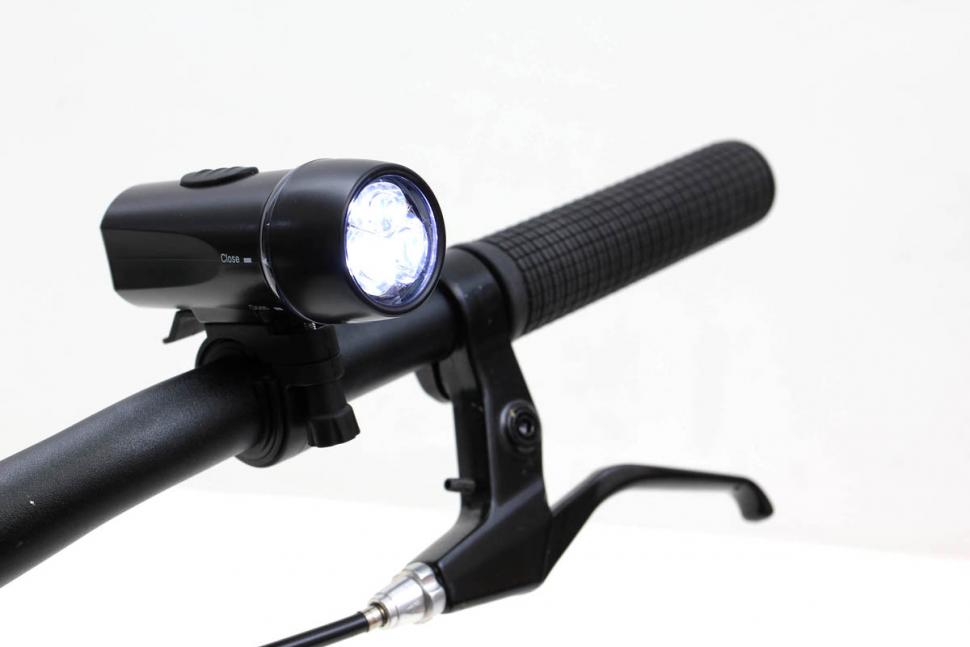 BBB's Ultrabeam is a useful light but it has to be said the design is starting to show its age, looking frumpy alongside the latest generation of super bright rechargeables. On the other hand, it's an honest to goodness compact companion great for occasional scoots round town or cosying up to old school dynamos.

Build quality and side-visibility have been greatly improved and the highest setting is just about good enough for navigating suburban cycle paths while a deluxe USB chargeable AAA variant is also available should you prefer.

Three super bright white mini LEDs produce 295 lux, which is pretty intense relative to its size and markedly better compared to its Hi Integrate sibling on high beam along unlit paths to around 12 mph. Tell-tale signs such as the switch and plastics employed in the casing suggest it originates from the same factory as One23 Iintense Bright 1, interestingly enough although the two lighs look fairly different they also produce a very similar beam pattern, not quite as much punch in the middle but slighly more peripheral spread - you can see what I mean if you play with the beam comparator. The difference is that the BBB is £12 less, indeed it's lighting performance on full beam isn't far off that of some lights costing double. For the sake of seeing what you get for roughly the same money the comparator is set to lights of roughly the same price.

Twisting the lens counter clockwise splits the unit in two, giving access to the simple battery tray and circuitry. Unusually it's a triangular profile internally, providing secure tenure but requiring a deft shake before the tray slides free. The mounting bracket feels slightly soft but seems a universal and a surprisingly solid fit in situ and can be mounted beneath, saving precious handlebar real estate. The top mounted switch is positive, easily operated on the fly, toggling between steady, flashing and off but it's not too easily engaged so you're unlikely to find it illuminating pockets, bags or panniers.

Riding through the town, flashing mode was arguably best, although sometimes I felt it pulsed a little too quickly and was neutralised by municipal vehicles and similar visual noise but a quick flick to steady seemed to sort that. Usable, see-by light is somewhat muted by halos, slightly endemic to this type of light, although hustling away from the town along poorly lit shared paths illumination was passable to around 10m at 12 or 13 mph. Open road visibility is to around 350 yards in flashing, although the peripheral window doesn't give much away to oncoming traffic at roundabouts-especially in the rain.

BBB are very coy here but basically it's a commuter/contingency light for sub/urban runs or as a dynamo companion.

Generally good, although the plastics employed felt a little soft but a long way short of flimsy.

On the one hand BBB Ultrabeam is a contradiction in terms and this design is starting to show its age, looking frumpy alongside the latest generation of super bright rechargeables. On the other, it's an honest to goodness compact companion great for occasional scoots round town or cosying up to old school dynamos and at the end of the day lights are about function before form.

Nothing given the design brief, although the latest generation of LED blinkeys pack more punch and consume less handlebar real-estate.

Would you consider buying the light? Possibly-as a dynamo companion/contingency unit

Would you recommend the light to a friend? In the above context, yes.

Tricky one, I've given it a six really in the context of how it stacks up against the newer competition - you can get more light for the same money - but if you do buy this one, it certainly won't let you down