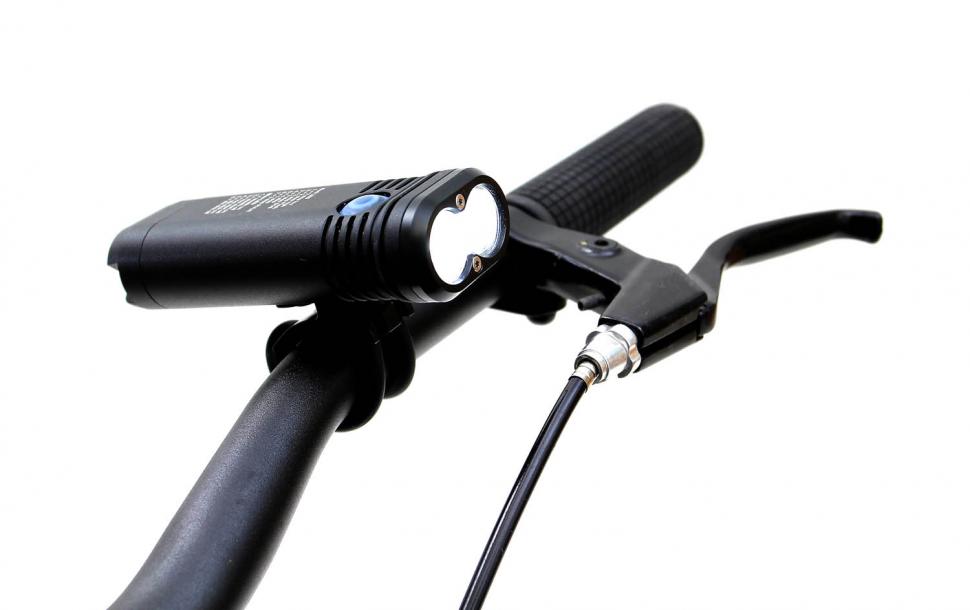 6
10
Basic optics and modest runtime mean that despite the fancy electronics, this is a surprisingly crude light. Disappointing
Weight:
199g
Contact:
www.zyro.co.uk
How we test

Lupine make some of the most serious (and expensive) bike lights going and this Piko is the baby of the bunch. It comes in three flavours, Max (which we have here) Mini and Ultra.

The Piko Max is a small torch style unit aimed squarely at the booming all-in-one market that the likes of Exposure have helped to create. It's a pleasing little slab of metal and fits onto the bike with a simple o-ring. I found it a bit of a struggle to squeeze onto oversized bars and users with a weak grip or small hands might have a hard time.

One thing you can't say about Lupine is that they under-engineer their lights. The Piko comes with a programmable switch which offers seven different combinations of light sequence and six different operating modes. All of these are accessed by holding down the switch and counting a set number of flashes. It's a jolly clever piece of electronic wizardry but why would you want to? Lupine proudly boast that there are 56 possible combinations, which just seems like total overkill. I don't think I've ever felt the urge to re-map my light sequence and while it might appeal to hardcore gadgetheads, I can't see the point. If Lupine had set it up with a single unalterable sequence (switch lit, double click for on, three setting cycle plus flash) I don't think anyone would complain or feel shortchanged.

Ok, so once you've finished playing with the settings (including a 'disorientation flash' which even the manual says you shouldn't use) what is the light actually like to use? Well, there's good news and bad news. The good news is that the side by side Cree XM-L LEDs punch out 750 lumens, which is a decent whack of light and if you're the one behind it you'll have no trouble navigating pretty much anything short of ultra fast off-road descents. A quick look at our light graph confirms that the spread is wide, with gentle tailing off at the sides. It's certainly a reassuring light to ride by, even on dark and twisty lanes. The bad news is that the beam is very dispersed with little by way of a central spot and lots of light blasting upwards into the eyes of oncoming traffic.

Traffic includes fellow cyclists and on my commute home it was noticeable that people on the bike path were having to shield their eyes from the glare, even with the light on a low setting and the beam pointed right down. Lupine's speciality is off-road lights and really this fits into that category. Interestingly, Lupine don't even list this light in the bike light section of their website, it's actually in the flashlight bit which in itself is odd, because the unit runs hot enough to fry eggs.

The other big downer is that the run time on full power is a mere two hours. You can have up to three hours if you power down to the 470 lumen setting, but that's a serious drop in output. For comparison, the road specific Exposure Strada we tested puts out a comparable amount of light (in fact, according to the graph it punches harder and wider than the Piko) but will give you 3 hours on full power. If you're using a light for commuting and evening training rides longer runtimes mean bigger intervals between recharges and greater reassurance that you won't find yourself stranded in the bum end of nowhere. You do get some warning when the light is about to shut down, but you might want to keep the manual handy so that you can decode the various warning flashes. Compared to the superb level of information provided by the Trelock LS 950 (review coming soon) it's pretty basic and not very helpful.

Although the Piko is well made there's no getting away from the fact that the run time is poor in comparison to some of the competition and it costs £100 more than the Strada - that's pushing it even for 56 different beam settings. It also has a beam pattern that is better suited for off-road use. Whether it suits your type of riding is your decision but as we are a road site it loses points for this. You can't help wondering if the Lupine lighting geeks might have been better occupied in maximising runtime and improving the optics rather than faffing about with fancy button configurations.

Basic optics and modest runtime mean that despite the fancy electronics, this is a surprisingly crude light. Disappointing.

Lupine say: "our Piko TL is either an extremely compact flashlight or the most modern LED bike light in the world."

It's certainly one of the most complicated lights I've come across.

It's certainly the most complicated. Gets far too hot to be a torch, unless you also need a handwarmer.

Hmmm. The switch is easy to operate but there are 56 different ways to configure the settings, which is surely 55 more than anyone actually needs.

It's a basic O-ring, which gives a good snug hold, but might be difficult for people with smaller hands or a weak grip.

Casing looks sound and switch is rubberised but charging port is exposed and might be vulnerable. That said, it survived the hose test unscathed.

2 hours on full power is poor for a light at this price. Charges in less than three hours.

Big wide beam, but too dispersed to be ideal for road use.

Two year warranty on the light.

Has two thirds the run time of an Exposure Strada, but costs over £100 more...

On dark lanes it's a nice light although oncoming traffic might beg to differ. Short run-time does rather limit it's use.

Modest size, great to see by on dark lanes.

Did you enjoy using the light? Mostly

£350 buys you complicated electronics and a powerful light, but very average run time.