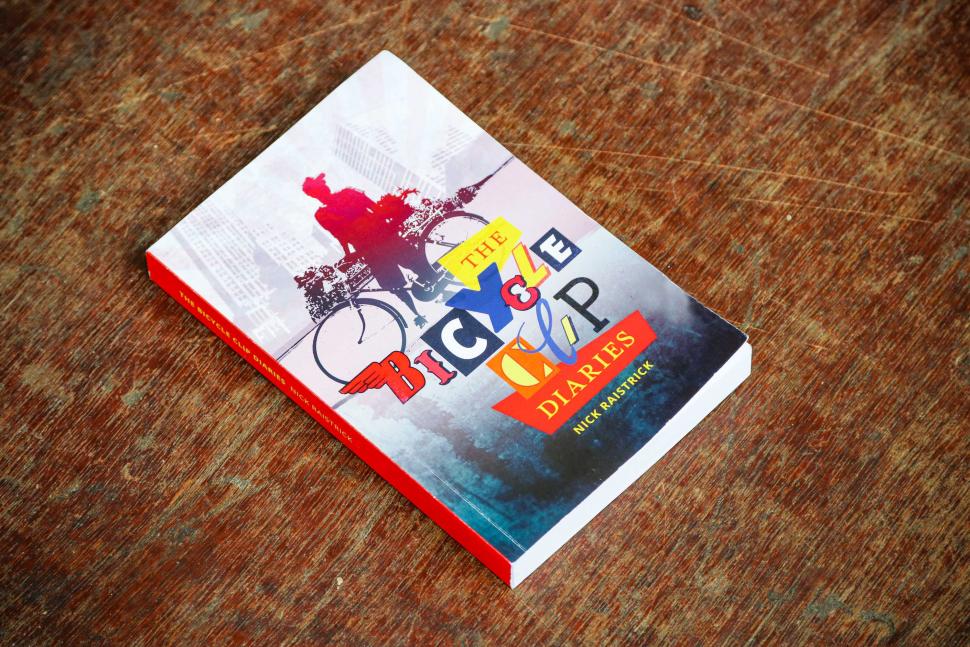 7
10
A personal story of one man's eclectic travel experiences on a bike
Entertaining, informative, and varied
A bit low budget
Weight:
399g
Contact:
nickraistrick.com
How we test

Bicycle-based travelogues are plentiful, and most try to blend disaster management and humour into an entertaining story. The Bicycle Clip Diaries takes a different approach, offering thoughtful observations with wry humour – with only the odd disaster to overcome. Most of us won't undertake such a journey, but we can still empathise with much of what Raistrick has written, which could only have come from a committed cyclist.

The story starts with Nick Raistrick sorting out his father's garage: 'a brown A4 envelope catches my eye. It is addressed to me. In my Granddad's handwriting. He has been dead for more than a decade, so naturally I am curious.' I don't think that Raistrick needed much encouragement to go on the resulting adventures by bicycle, but the contents (a guide to Japan and some trouser clips) provide him with a theme for the book.

The Bicycle Clip Diaries is described as a 'travel memoir', full of the thoughts and observations that travelling by bicycle encourages. You probably have to be a cyclist to appreciate them fully, but it is certainly not all about cycling – even though by the end of it Raistrick has cycled on all continents, 'with the exception of Antarctica'.

Initially I feared that only Raistrick's immediate friends and family might be the ones to really enjoy the book, with it appearing to be a very personal 'journey' – both physically and emotionally – but while it will of course appeal to that audience, there is plenty for the rest of us as well.

The writing reminded me of some articles in Boneshaker magazine, and then I discovered why: Raistrick has had work published there! The book even develops some of the thoughts that first appeared in a Boneshaker article. In many ways I was reminded of Rides of passage – another personal account.

During his travels Raistrick manages to unearth many unusual facts: I didn't know that 'during the Second World War it was compulsory to paint the bottom of your mudguard [white] because of the blackout', for example – which proved useful when dating a museum exhibit.

I enjoyed many of his soliloquies, or 'meanderings' as he calls them, such as the insightful one about 'Bicycle Shaped Objects' (BSOs), 'which break down and can't be repaired without replacing components in such a way as to increase costs beyond the purchase price of the bicycle itself'.

I wouldn't have minded more such musings, but unless they were part of his personal story Raistrick didn't want them to detract from the main event. One significant example was a whole chapter about women's cycling, which was written but not included: it is an interesting read, and is available to read on his website. As a bonus, it is also an opportunity to 'try before you buy'.

Many world travellers will be familiar with Raistrick's experiences, such as this classic one in a hotel:

'Do you have Wi-Fi?' I ask the sleepy receptionist when we check in.

I follow up with the instinct of a seasoned traveller. 'Is the Wi-Fi working?'

'No,' she explains cheerily. 'Possibly Monday?'

Unfortunately, there are no pictures in the book; that might be good news for the Kindle option, but I would love to have seen a picture of a ciclotaxi in Colombia, complete with 'its padded bench-style seating [and] a dainty parasol'.

> Buyer's Guide: 36 of the best books about cycling

At the risk of opening myself up to the same accusations, I was occasionally distracted by some spelling and punctuation errors, and couldn't get used to the odd idea of having all chapter headings in lower case. I also found that the layout and design felt more 'budget' than 'quality', possibly as a result of limitations imposed by taking the self-publishing route.

However, the 'do-it-yourself' choice did allow Raistrick to stipulate that 'each letter in the Bicycle Clip part of the title should be based on a letter from an iconic bicycle brand', even though 'the long suffering designer Ric Marry's...unspoken point was that nobody would notice or care.' It's a nice touch, and it gave Raistrick the opportunity to run a competition to identify each brand, with the winners receiving a free book.

Make and model: The Bicycle Clip Diaries by Nick Raistrick

"I was helping my Dad clear out his garage in Middlesbrough, when I found an envelope addressed to me. In my Granddad's handwriting. He's been dead for more than a decade, so I was naturally curious. It contained two items. A pair of bicycle clips, and a 1937 guide to Japan."

Like the Black Mamba in Tanzania, which takes him through Maasai country, or the mamachari he rides on the beaches of Zanzibar, avoiding dog-sized crabs.

He travels to Colombia to experience ciclovía, and finds his path blocked by an illegal guinea pig race. He admires the customised Rasta BMXs of the Caribbean coast, and finds that gears can be quite useful in the Andes.

He accidentally ends up on dual carriageways and in Nuneaton Wetherspoons; gets caught in storms in the Peak District and the North York Moors; and follows in the pedal prints of Iggy Pop and David Bowie in Berlin.

In Japan he is shocked to find that they ride on the pavement; gets stressed about Donald Trump in a Zen museum; but finds inner peace in a capsule hotel in Tokyo. It is a non-linear quest.

Guided by the spirit of his Grandparents, who rarely left Middlesbrough, the Bicycle Clip Diaries is a travel memoir in which the author rides practical bicycles in Germany, Japan, Yorkshire, China, Tanzania and Colombia.

The variety of random thoughts.

It's a bit expensive for a book with no pictures and a low budget feel.

Would you consider buying the product? Probably

Would you recommend the product to a friend? Unlikely

It is an unusual and very readable bicycle travelogue, slightly let down by its production values.