Back to REVIEWS
review
Cameras

DJI's Osmo Action is one of the top-dollar action cameras in the market and it performs really well, with excellent footage, great stabilisation and lots of features. It's up there with the GoPro Hero7 Black at the top of the pile. Which of the two will suit you better will mostly depend on which features are most important to you. The Hero7 has slightly better stabilisation, the Osmo gets a front screen. In terms of video performance they're very similar. 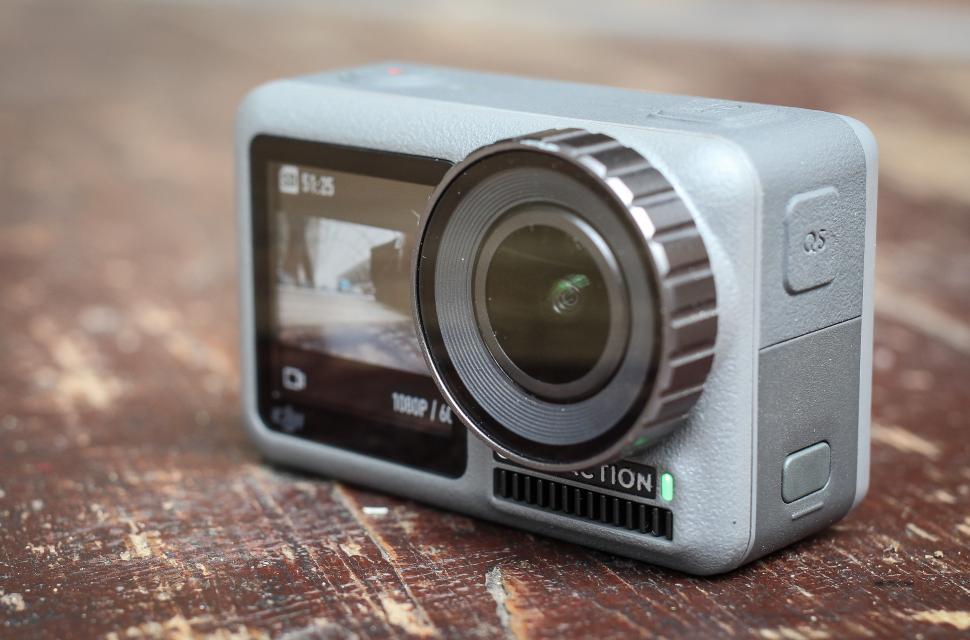 In the box: The basics

Opening the Osmo Action box isn't like getting a value camera, where about a million different mounts come as standard. You get the camera, the mounting cradle, an adhesive mount to stick to your helmet/surfboard/car/etc, and a USB-C charging lead. And that's your lot. It uses the same mounting system as GoPro and everything else, so if you want a big box of mounts you can pick one up online for about a tenner.

Video: Excellent quality and a good range of resolutions

Mostly, you want to know whether a video camera does good video; everything else is secondary to that. You'll be pleased to know that the quality of the video is right up there with the best.

In good light it's crisp and sharp, with excellent definition and good colour saturation. It's sufficiently good that I've used it for whole videos on the road.cc Youtube channel, like this one:

All of the moving footage in that vid is from the Osmo Action. The only thing that's not direct from the camera is the audio, which was recorded separately. The in-built microphone is decent enough, though. In this video of the Red Bull Timelaps race:

All of the talky bits in the main race report are direct from the Osmo, and nearly all of the action footage is, too. You can get some wind noise, but a lot of the time you can use your hand as a baffle to mitigate that. You could also use a stick-on wind baffle over the microphone hole if you do a lot of filming where it's an issue. The sound is usable, but it's not the highlight of the camera; it never is on action cams. DJI now offers a CYNOVA adapter for £39 on its website that allows you to plug in an external microphone via a 3.5mm jack.

There's plenty of stuff in the Red Bull vid from overnight, and most of the first day was pretty murky too, and the quality of the picture suffers a bit from a lack of available light, but you can film in low light and still get usable footage. I tend to shoot in 1080/60p most of the time, as that gives the option to slow footage down. As the light dwindles it's worth dropping down to 1080/30 or 1080/24. If you want 4k footage then you can shoot up to 60fps in 16:9 ratio, and 30fps in 4:3. HDR footage tops out at 30fps at all resolutions. 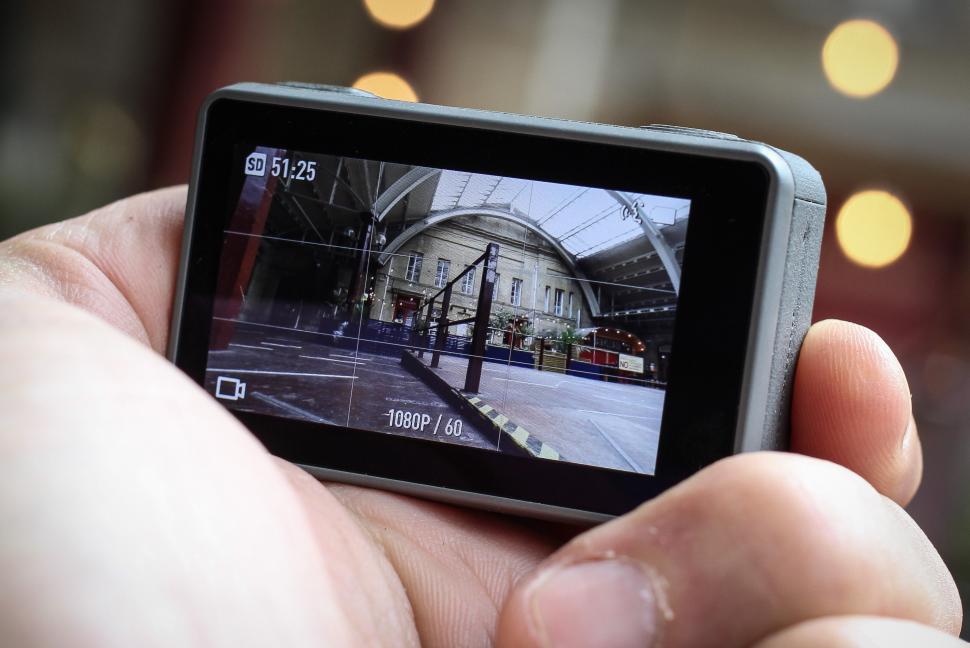 One thing I did find with the Osmo Action was that it was too easy to switch modes by accident when the camera was in a bag or a pocket. There were a number of occasions where I was reviewing footage where I found I'd recorded timelapse or slow motion instead of standard video. I think it's a combination of the side button accidentally getting pressed (which switches between modes) and the touchscreen being quite sensitive. 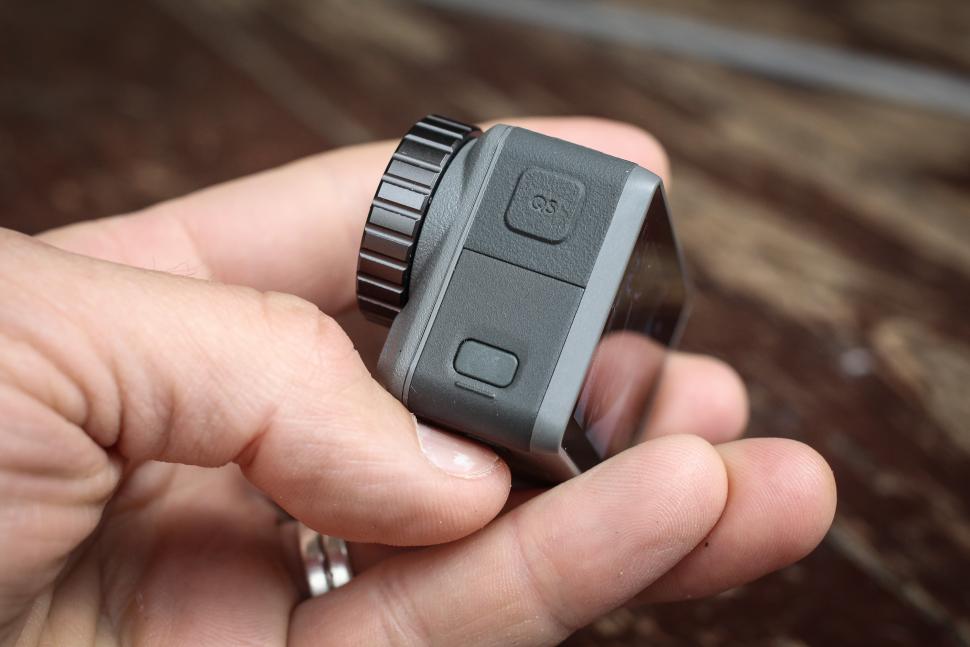 Slow motion: You can get really, really slow

If you're filming in 1080p then the Osmo Action can shoot at up to 240 frames per second. If you're editing on a 24fps timeline then that's slowing down live action ten times, which looks pretty cool. Even at 30fps, which is what many standard video editors use, it's still one-eighth speed. You can shoot at 120fps too. There's a section in the Look e-765 video above (8:10) shot in 240fps and slowed to one-tenth speed. Skids look cool that slow. You need plenty of light to get decent results shooting that fast, it really requires a sunny day, but the results in bright conditions are really excellent. If you watch that clip you'll probably wonder how I managed to not hit the camera. And the answer is, I didn't: I booted it about 20 metres down the road with my back tyre. I can vouch for its build quality.

Stabilisation: Almost as good as a gimbal in many situations

Top-end action cameras have really upped their game in the past couple of years where stabilisation is concerned. The Osmo Action is right at the top of the pile with the GoPro Hero7. GoPro calls it Hypersmooth and Osmo calls it Rocksteady, but the effect is much the same: really steady footage. A lot of work is going on inside the camera; if you look at the screen during Rocksteady recording you'll see a slight lag as the camera processes the scene. 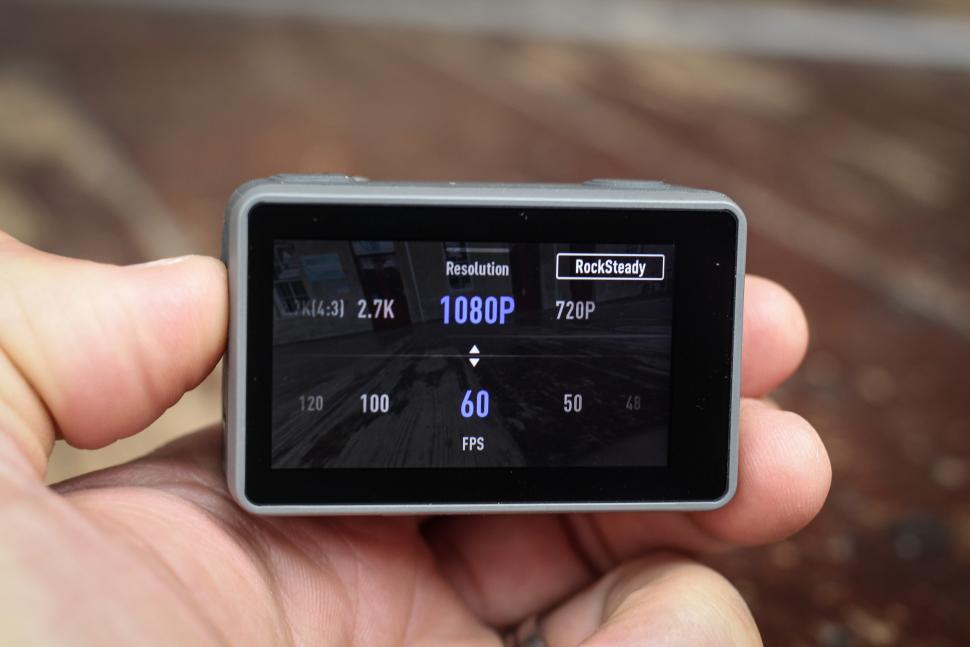 On a bike mount, attached to a car or at the end of a selfie stick, the footage is pretty much perfect most of the time. If you have the camera in your hand you can still see a bit of movement, and overall the stabilisation isn't quite as good as the GoPro used like that, but it's pretty remarkable nonetheless. It isn't as good as having the camera on a gimbal, especially when hand holding, but a gimbal's not much use if you're pulling the camera out of your jersey pocket or jumping into a river, and what the Osmo gives you is usable footage straight out of the camera nearly all of the time.

Front screen: Genuinely useful but not in all conditions

The front screen is a unique selling point of the Osmo. Push the side button for a second, or double tap the screen, and it'll switch to front mode so you can see what you're filming. The front screen is square, and you can choose to either have cinema bars at the top and bottom and show the whole picture, or just crop to the middle section, which tends to be more useful unless you really need to see what's going on in the wings. 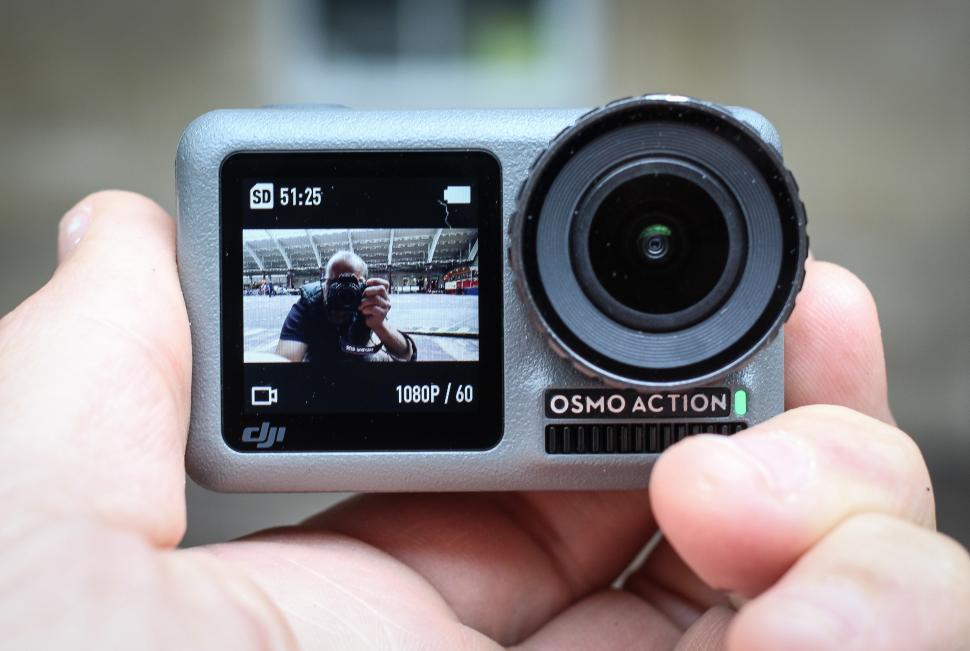 If you're taking any kind of selfie footage then it's really useful to be able to frame the picture and make sure you're right in the middle of it. Action cameras have a pretty wide-angle lens so most of the time you'll be fine anyway, but it's often hard to know exactly how much of you will be visible. The screen really helps there, and also in other situations: if you're doing a piece-to-camera with the Osmo on a tripod, you can frame the shot easily.

It's not always that useful, though: it's a small screen, and not especially bright, so if you're using the camera in bright sunlight it can be a bit hard to see what's going on, as it can if you're further than about arm's length from the camera.

DJI's Mimo app allows you to use your phone to control the camera. It's pretty handy if you're setting up a shot or you're using the camera in a way that means you can't easily get to the record button; for example, if you've got it stuck to the outside of a car or attached to a drone.

It works via WiFi and it's pretty easy to set up. You just connect via your phone, check and accept on the camera, and the two are paired. You can record and take photos, and all the camera settings are configurable from the app too.

Overall and vs the GoPro Hero7

I reviewed the GoPro Hero7 Black edition earlier in the year and the obvious direct comparison is to that camera. The Osmo is a bit cheaper at full RRP, the cameras are both solidly built with an excellent range of modes. The footage from either is as good as you'll get right now, and the fact that they're both waterproof out of the box makes them much easier to use than cameras that need an enclosure. The GoPro scores on having slightly better stabilisation in-camera, and the Osmo gets the front screen which can be pretty useful.

> How to choose the right bike cam

There's really not much between them, to be honest. We ended up buying an Osmo Action for the office based on our experience of the test unit, so that's an endorsement from us. You won't go wrong with either of the two top-end cameras, so pick the one you like best.

More Than an Action Camera

This Is Osmo Action

Jump, dive, or fly into your next adventure with this versatile action camera.

Can Your Action Camera Do All This?

With dual screens, RockSteady stabilization, and 4K HDR video, Osmo Action unleashes your other side.

From the everyday to the extreme, RockSteady helps you capture every moment in smooth detail.

Osmo Action has a durable design that is temperature resistant down to -10°C and waterproof at depths up to 11 meters.

Solidly built and survived some spills.

Very well, can be used as a primary camera for Youtube/vlogging.

Too easy to switch modes by accident, stabilisation not quite as good as GoPro.

At £329 RRP it's a bit cheaper than the GoPro Hero7 Black, although both are discounted online.

Would you consider buying the product? We did buy one for the office.

It's a high quality camera that spits out excellent footage, and the price is on a par with its direct competitor, the GoPro Hero 7 Black. 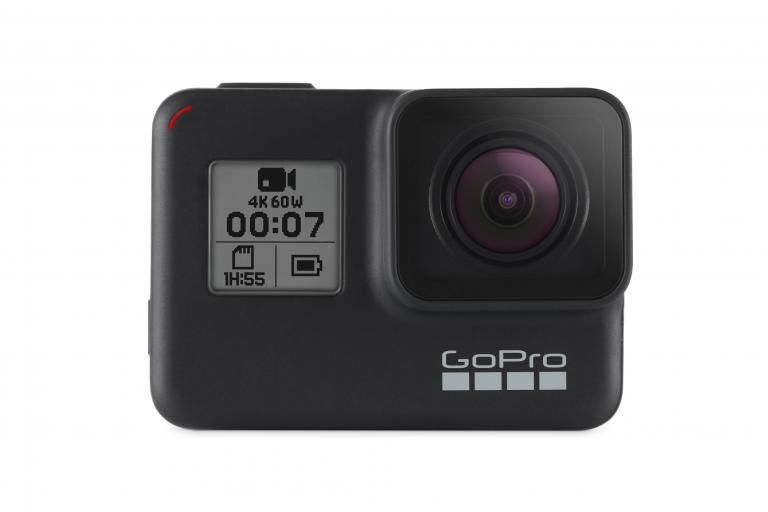 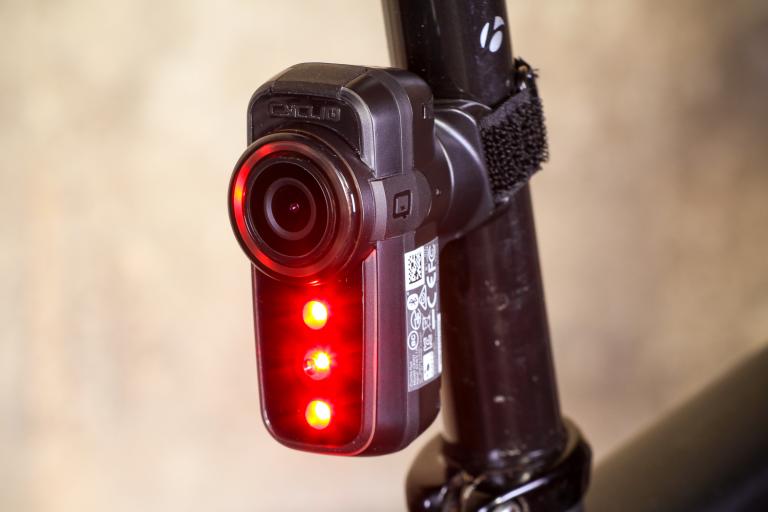 As an all-in-one camera-light package it's good, with a few notable issues to be aware of 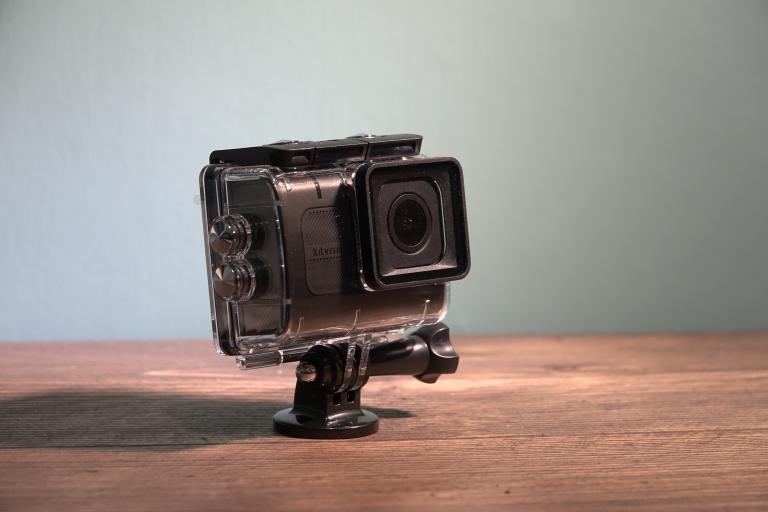 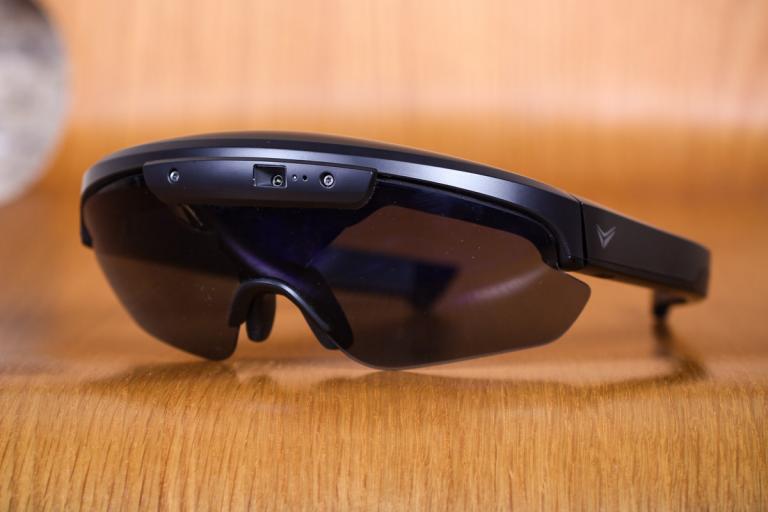