Professional cycling photographer Graham Watson has produced several books over his career, focusing on various aspects of the sport, but this one 'is the book that trumps them all for it covers everything under one title'. He makes the bold claim that 'it's the most complete photo-book ever produced by one single cycling photographer', and I certainly can't think of a stronger contender for the title.

Good photography will always enhance good writing if chosen well; I may be unusual, but I always look to see who is credited with both the writing and the photos for anything I read, and you soon notice that publications often rely on a small pool of proven contributors or agencies.

Watson is one such contributor, and has been a reliable source of high quality images since he became serious about photographing the sport in 1977. That year was the last time Eddy Merckx rode the Tour de France, and a shot of 'the Cannibal' from the event won Watson an award: as one career drew to a close, another was off to a good start.

Watson put his lens cap on for the final time after the Tour Down Under last year, which meant that he had been photographing the top level of the sport for just a few months short of 40 years. As he explains here, his first job in retirement was to work on this book, with editorial assistance from respected journalist Luke Edwardes-Evans. It is his first foray into self-publishing, which brings with it extra demands and responsibilities, but 'no end of control over my work'.

Our sport provides good opportunities for memorable photography: in addition to the colour and action of most sports, cycling has the attractions of dramatic locations, changeable weather and close-up access for anyone trying to capture that special shot. Many of us succeed in getting the odd worthwhile snap, but it is a very different thing to consistently produce good quality shots for several months of the year over four decades. It is clear from Watson's book that successful photography doesn't just happen: a combination of planning, experience, equipment, skill and, of course, luck all play a part – but exactly how big a part is highly variable.

Good planning is clearly important to a successful outcome, which includes getting the finished product into the hands of the paying customer. In Watson's early days he would hand over rolls of film to a courier after every stage of a race such as le Tour, for them to be flown to Paris, and then taken by Concorde to Sports Illustrated magazine in New York.

Watson tells the story of how a lack of preparation led to him turning up to cover an evening track meeting in Ghent in 1982 – only to discover that it was an afternoon event, and it had just finished. He didn't make the same mistake again.

Dozens of photographers (and their motorbikes) are trying to be in position to take a marketable shot of the important moments of a race, and Watson demonstrates that experience can improve your chances of making the right decision. Ultimately, you need to produce the shots that support the stories that are being written, otherwise you won't get paid.

One of the biggest changes to the equipment that Watson used is obviously the shift from film to digital cameras, which he documents throughout the book, showing how cameras have progressed just as much as the bikes in the same period. I enjoyed reading the background story to the tools of his trade: how reliability issues once drove him to switch from Nikon to Canon bodies, and how it took until part-way through the 2003 Tour before Watson stopped running both film and digital cameras in tandem. 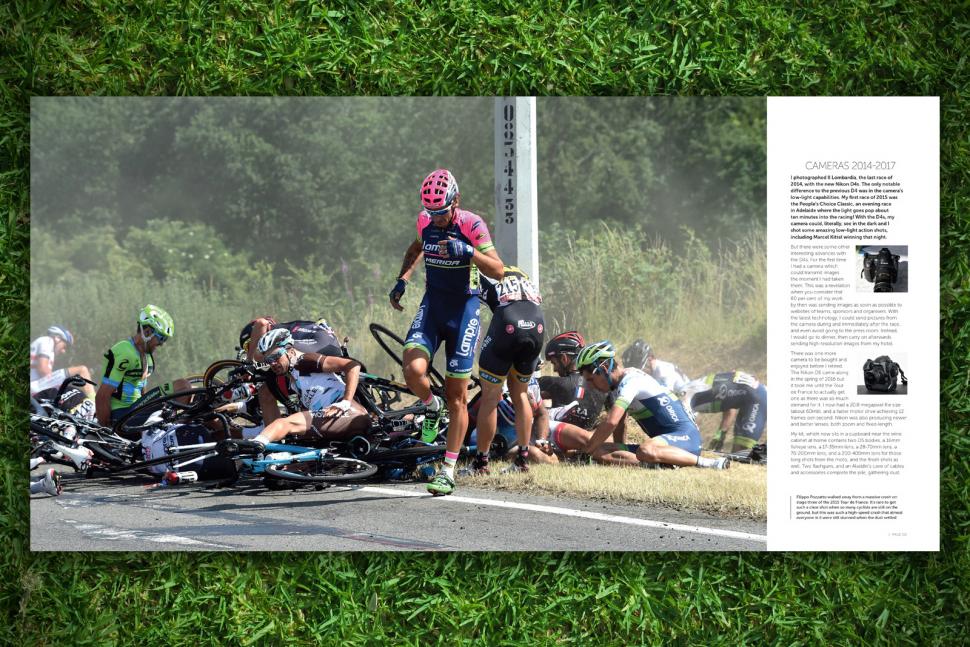 While any of us could replicate Watson's equipment choice if we were prepared to spend enough money, we would not necessarily have the skill to operate it properly – except in the case of focus: 'In 2001 I finally abandoned manual focus – even average photographers were creating sharper images with auto-focus.'

Serious photographers might have appreciated Watson's inclusion of camera and lens settings in his previous 'coffee table' book, the 2004 publication Landscapes of Cycling, but it meant little to me, and such detail is absent here.

Every photographer will benefit from a little good luck occasionally: who can forget Chris Auld's shot from last year's Tour? Watson has had similar good fortune occasionally: although he was not behind the Tweet, it was Watson's picture that captured the moment when Richie Porte received 'illegal assistance' in the 2015 Giro.

If professional cyclists need reminding that there could be a photographer anywhere, then this picture by Watson should be a warning, or one of Chris Froome pouring a can of Coke into a Gatorade-branded water bottle – 'an insignificant act that got me (and probably him) gently reprimanded by Team Sky'.

Not only is the list of photographers with a large enough body of work to populate a book like this a small one, the number of those who can successfully supply the words to complete the page is even smaller. Watson has proven his ability over previous books and articles: I used to enjoy his 'Life through a lens' column for the now defunct Cycle Sport magazine, as it was as much about his thoughts on the racing scene and the background to his work as it was about showcasing his pictures – a bit like this book.

As well as the autobiographical aspect of the book, Watson provides some insight into life as a cycling photographer: from the day-to-day activities to the challenges of a relentless annual cycle. Other topics are covered here, although sometimes he has gone into greater detail in a previous book – such as the use of motorbikes for photography, or the appropriate thing to do when witnessing a serious crash (both in Visions of Cycling).

Obviously some of the riders in Watson's pictures were not quite what they seemed at the time, with Lance Armstrong taking the need to rewrite history further than most. I agree with Watson that whatever your views on their actions, as a pictorial record of events at that time it is necessary to include pictures of such riders.

Watson himself accepts that, like many of us, he 'was fooled by the Lance Armstrong phenomenon', and that he 'thoroughly enjoyed photographing Armstrong, Ullrich, Pantani and their like' – just as much as we enjoyed seeing the images. 'Like them or not, even the worst offenders have helped to push my career along – I would be a hypocrite to ignore that.'

Watson finishes the book with some commentary on a few 'special' cyclists. Bradley Wiggins is there largely because his 'Tour victory has to be one of my greatest memories', even if many consider that the lustre may have come off his achievements. Chris Froome is also present, and while Watson's upbeat comments about Froome's victories may become out of date, we should remember that they were written well before last year's Vuelta had taken place – let alone the revelation of the salbutamol incident.

Naturally, some of the 330 images in the book have previously appeared in various publications over the years, but here they can be given more space where it is appropriate. Some of you will recall the incredible pictures of Laurine van Riessen in the Keirin at the Rio Olympics, and I was delighted to see that Watson had afforded a page-and-a-half to his shot of the spectacular incident, allowing us to savour the full extent of the action. If you have one of Watson's older books you will also have a small amount of repetition: there are a handful of images from the 2000 publication 20 years of cycling photography, but nothing since then. However, even where the same photo is used, the crop or the commentary is different, so no one should feel short-changed.

As is usual with such books, there is also the promise of 'hitherto unseen pictures', with Watson having 'dug ever-deeper' into his archive.

The result is a book that lives up to the claim of being 'both a pictorial encyclopaedia of the last four decades of the sport as well as a tribute to the cyclists and races that formed the heartbeat of those decades'. It takes the best elements from his previous works, and provides a final update to his career.

A photographic 'greatest hits' from Watson's 40 years in the sport, with added autobiography, advice and history lessons

Make and model: 40 Years of Cycling Photography by Graham Watson

40 Years of Cycling Photography represents a lifetime's work for World famous cycling photographer Graham Watson. From Bernard Hinault in the 1970's through to Chris Froome in the 2010's, Watson's photography of the greatest champions and epic races is the most complete cycling archive ever captured by a single photographer. Watson was there when Hinault won his first Tour de France in 1978, and when Miguel Indurain won his fifth Tour in 1995. In recent times, Watson recorded the emergence of a new breed of cycling superstars from Cadel Evans to Mark Cavendish and Peter Sagan. Cycling fans will revel in the variety and quality of the images in 40 Years. Sean Kelly's glorious career, as well as other great Classics stars such as Tom Boonen and Fabien Cancellara feature throughout the 300-plus images.

Graham has produced a bumper sized coffee-table book to celebrate the culmination of his 40 year long career as a cycling photographer. Graham's career began in 1977 when he sold a shot of Eddy Merckx from the final stage of his last-ever Tour de France. That image catapulted Graham into the world of professional cycling and launched a career that stretched through the eras of Bernard Hinault, Greg Lemond, Sean Kelly, Tom Boonen, Chris Froome and Peter Sagan. This book is, without doubt, the most complete cycling archive ever published by a single photographer. Equally, it represents a passage in time of the sports' greatest moments.

A beautifully produced book with a lot of pages and a lot of colour, meaning that it scores highly on the 'coffee table' rating.

The insight into what it takes to be a sports photographer, and viewing racing from a different perspective.

By devoting a chapter to highlight his support for some of his favourite cyclists, Watson risks any controversy surrounding their performance becoming the main talking point of the book.

The book does what it sets out to do, and does it well. If you could only have one book by Graham Watson, then this is the one to have.