The Obree Way - A Training Manual for Cyclists

7
10
Tells you all about the training methods that made Graeme Obree so fast – but doesn't guarantee the same results for yourself
Weight:
470g
Contact:
www.bloomsbury.com
How we test

The Graeme Obree story has been told many times, including an autobiography and a film (The Flying Scotsman), and this has provided some insights into his training methods. The Obree Way focuses entirely on Obree's often unconventional approach to making himself faster on the bike. It does a great job of helping us understand Obree's thoughts on achieving success, but will be less useful as 'a training manual for cyclists'.

Most of us will have our favourite Obree story: perhaps the use of washing machine bearings in his self-built bike, or his successful attempt on the World Hour Record the day after an unsuccessful attempt. I like the fact that he managed to come up with a new time trial position that was more effective than anything that had gone before, and was banned by the UCI – and that he managed this feat twice. However, this book is not about that side of his performance: it is all about his training and fitness, the psychology and physiology. 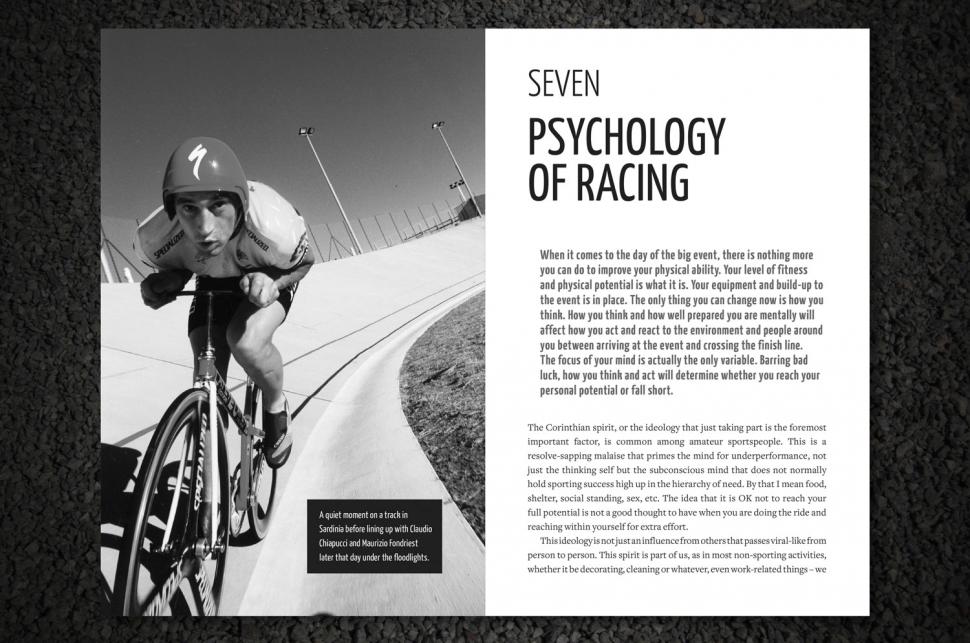 There is no doubt that Obree found out what worked for him: 'In a vacuum of real awareness, I found it necessary to employ training methods that I felt worked for me and that survived the process of logical analysis.' However, basic coaching principles would suggest that even if you happened to be competing in exactly the same events as Obree (mostly against the clock, and mainly up to one hour), it is unlikely that his training choices would be equally appropriate for your circumstances. Obree understands that 'you may or may not find every piece of advice in this book useful'. 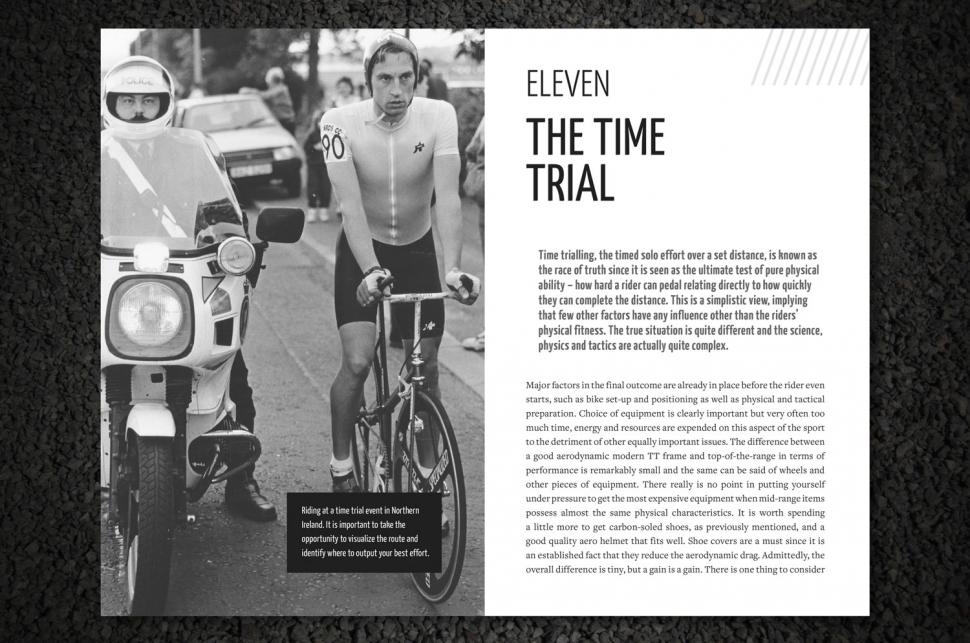 Obree does have some unusual ideas, but he always has a reason for doing things 'differently'. If I could only take away one lesson from the book it would be to embrace such open-minded thinking and find out what works best for you in your situation.

Some of Obree's more conventional ideas include a thorough stretching routine after exercise, support for eating porridge and natural foods – and a recommendation to prepare your post-ride meal before you go training to prevent the temptation of unhealthy foods for a quick fix when you return. However, it does not always have to be his 'preferred food [of] sardines on toast with side servings of broccoli and carrots'.

Advice that may not suit you so well includes recommending a crank length of 9.5% of your height (170mm for his 1.8m height), and a saddle set far back on its rails (over 10cm behind the bottom bracket in his case). 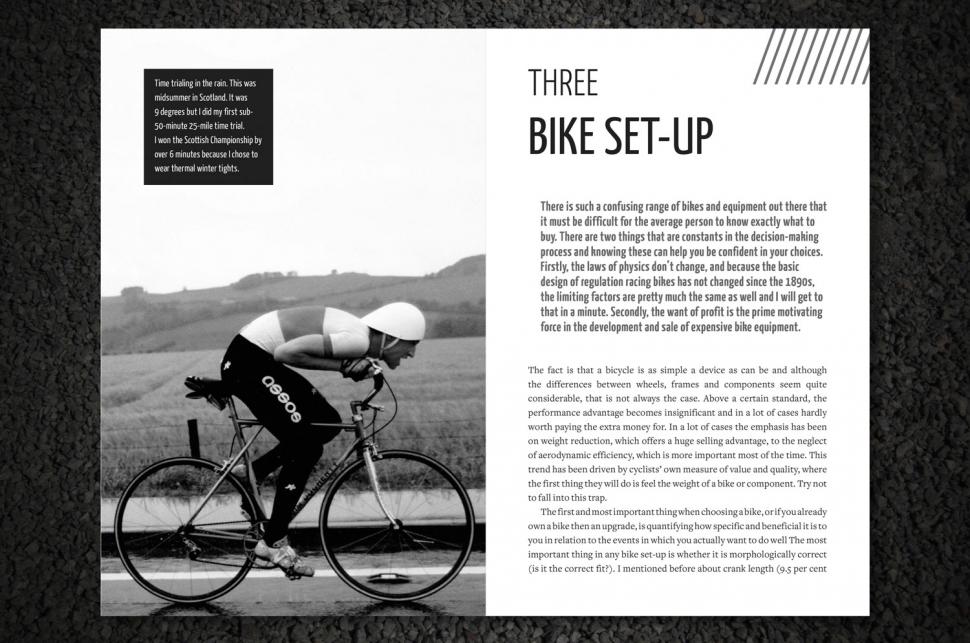 There is a whole chapter devoted to the apparently simple process of breathing, and apparently it was one of the main areas that Obree has been asked about since he first revealed 'the Obree breathing pattern'. Essentially, it is a three-stage process that involves a full, half, and quarter breath – but it is important to understand Obree's extensive explanation of what it is doing and why it works if you want to try it.

Obree believes strongly in regular and repeatable tests to monitor any increase in performance, and I doubt that anyone would disagree with that. However, his method involves a turbo trainer with magnetic resistance: not air or fluid, as these are too susceptible to changes in resistance due to temperature variation. Also, the resistance unit has to be spring-loaded, and any remote-control cable should be removed. 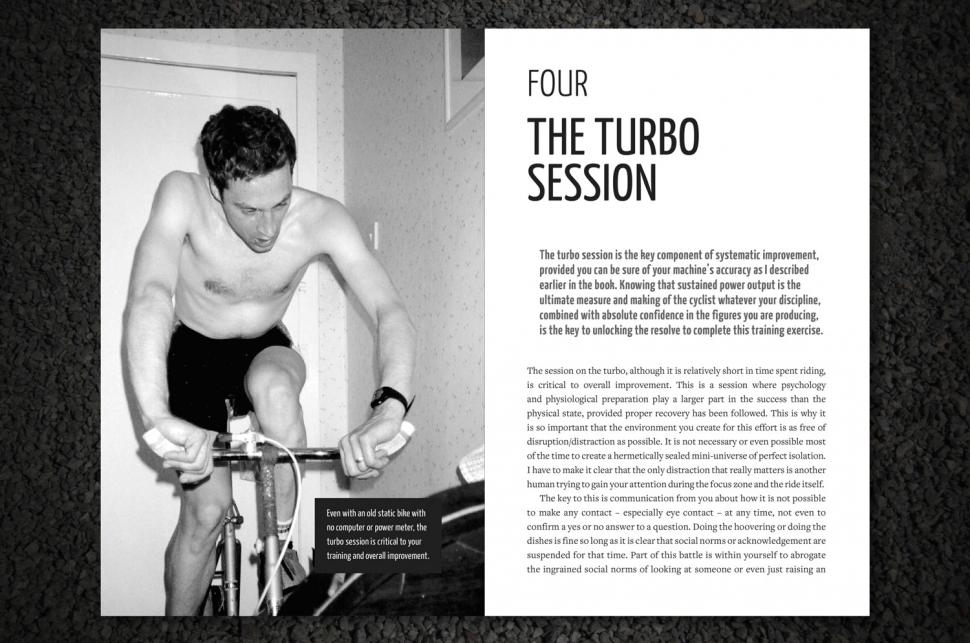 When Obree was performing on the world stage 25 years ago the options available for reliable testing were limited, especially for an impecunious unknown from Scotland, so I can understand him wanting to make his own arrangements. However, technology (such as power meters) has made similar types of testing more readily available today, so why not use it? I suspect that Obree would do things differently if he were developing his testing methods now – albeit still with his own unique approach.

If some of Obree's methods are a bit 'old school' for your liking, there is still a lot of timeless advice that makes perfect sense and should resonate with everybody. My favourites include:

They may not all be original thoughts, but they bear repetition.

The Obree Way first appeared as a self-published title in 2011. This 'fully revised and updated' version includes some useful improvements, such as correcting the various spelling and grammatical errors that could be a bit distracting in the earlier edition.

Other updates include mentioning his association with Endura, although not the name change of the re-oiling device from Scottoiler (of which he is a fan) to Flaer.

Less welcome changes concern the pictures, which have taken the place of spelling mistakes as the biggest distraction in the book: the first edition featured a handful of pictures of Obree in action, and most of these remain. The problem is with the new agency pictures, which at best are unconnected to the surrounding text, and at worst misleading.

As a final example, what event do you think is pictured above the caption 'the key to Time Trial success...don't overcook your effort in the outward section of the race'? A mass-start event on the track! I felt that this element falls short of the high standard that Bloomsbury has shown in its other cycling publications, and they don't add anything to the book.

> Buyer's Guide: 23 books every cyclist should have on their shelves

A much more positive change is the addition of four completely new chapters; I found these to be some of the most interesting parts of the book, and because they are not quite so specific to Obree's particular events they will be relevant to a much broader range of competitors.

One of the new chapters is on 'Selection', and gives some good advice on working the system to your advantage to make sure that you are selected for your chosen event; another is 'The dichotomy of sport', and explains the necessity to behave in a socially unacceptable manner in competition, regardless of how civil you are the rest of the time.

This book is all about Obree's methods and his thoughts, and does not quote existing publications as sources. As such, you won't find any bibliography or references within; rather, you can expect to find other people's work referring to this one!

Make and model: The Obree Way - A Training Manual for Cyclists by Graeme Obree

No one but Graeme Obree has the clarity of vision to get to the heart of the 'problem' of how to improve as a racing cyclist. His innovative approach took him to the top of world cycling, twice breaking the world hour record.

This practical guide to revolutionising your cycling training – applicable to all cyclists, from the weekend warrior to the serious competitor – swerves conventional wisdom and strips cycling back to its elements, always asking the question: 'What actually improves my race time?'

Fully updated, this cycling classic explains Graeme Obree's radical insights into technique, training, psychology and diet, and the clear logic behind them. It is certain to help cyclists get the most out of their training.

Slightly expensive for its size, but considerably cheaper than the first edition – even with extra chapters.

It provides a real insight into the level of commitment required to succeed at the highest level.

The use of generic pictures with unrelated captions.

As a comprehensive explanation of Obree's methods it works well; as a guide for others it is less complete.