10
10
Still a niche subject matter, but this is a welcome update to one of the best reference books about bicycles
Weight:
1,280g
Contact:
www.cyclepublishing.com
How we test

At first sight The Dancing Chain appears to be just about derailleurs, and 'the history and development of the derailleur bicycle' subtitle reinforces that idea. However, it is actually a more complete history of bicycles than the title suggests, albeit one centred around the development of transmissions. Those who dismiss the book as being too specialist for their interests will miss out on the unique perspective that it brings to the bicycle's history and engineering.

The Dancing Chain follows developments in drivetrains over the years, and explains how we arrived at the brands and components we use today. Why is it that we talk about Shimano more than SunTour today, or derailleurs more than internal hub gears? As is so often the case, good fortune played as much a part as good strategy: it was Shimano's decision to embrace mountain biking that ultimately led to its current ubiquity, for example, and it was professional racing on the Continent that drove the development of derailleurs at the expense of enclosed gears.

The author, Frank Berto, is well qualified to write such a book, having gained a good reputation for his technical articles in the American magazine Bicycling during the '70s and '80s. Respected writers with even more specialist knowledge than his also contributed, most notably the late Ron Shepherd – who is credited as a co-author.

The Dancing Chain is not a lightweight read, nor does it try to make things easier by minimising the details; here you get more information than you will ever need, with more illustrations than you could wish for. This book doesn't really have any direct competition, so it would be silly to call it 'best in class', but it would take a lot of beating if anyone were to try. It has all the ingredients of the definitive reference book, with many pages of chapter notes, an extensive bibliography, and... thoroughness.

Where else would you find a full two pages discussing the geometry of rear derailleur cages and the position of the pivot point? And once you have read the full chapter on how derailleurs work you will never look at a rear mech in the same way again. 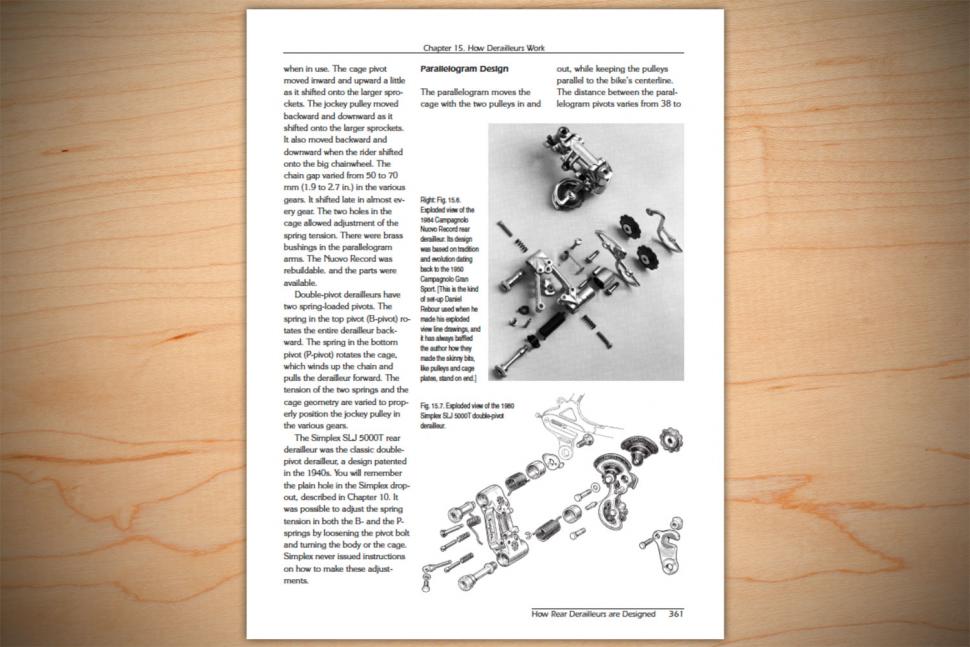 Companies spend a lot of time and money trying to make derailleurs lighter, more polished, and generally sexier (especially at the rear), but every mech is still just pushing a chain from side to side while being covered with road grime, just like they have always done. In Berto's view the fact that they can now perform this crude action so well that we rarely have to think about it is down to three main developments.

First we have the 'slant parallelogram' rear derailleur, which was patented by SunTour in 1964, and then used by nearly every other manufacturer as soon as that protection had expired. It 'kept the chain gap constant throughout the range [of gears]', making for slicker shifts at the rear. 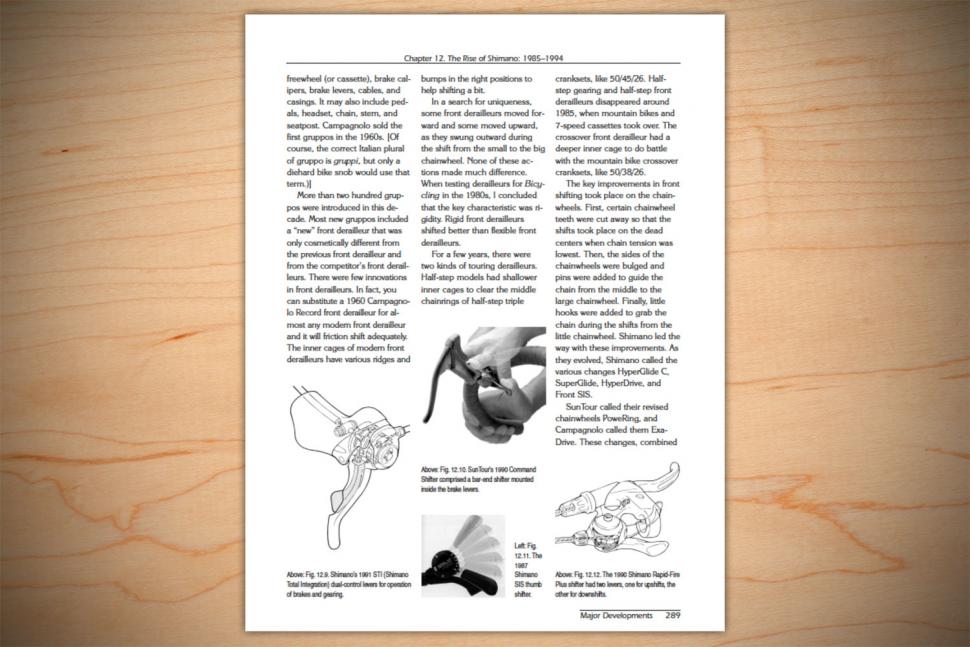 Finally, there was a 'huge improvement in rear shifting...due to the use of HyperGlide sprockets'; launched by Shimano in 1989, every company has some sort of similar shifting aid now, both front and rear.

We take those technologies for granted today, but integrated gear levers, wide-range cassettes, and even electronic shifting would not have succeeded without them. I don't think you will find a more complete record of such developments anywhere else, so for those of us with an interest in such matters, this is the book to have.

Berto is not necessarily a fan of all new developments, feeling that the addition of more sprockets is 'irrational' and a 'dubious improvement', carrying as it does too high a price: 'At the risk of sounding like a retro-grouch, I don't consider 10- and 11-speed freewheels progress. Tolerances have become just too critical...chains are expensive.'

Berto only really focuses on the products that changed gearing technology, and rarely covers the cheaper clones from lesser-known brands that can be found around the world, but which are for the most part simply copies of existing products.

If you want to get a flavour of just how many 'copies' there are, often from unexpected countries, Disraeli Gears is a delightfully eclectic website that catalogues Mike Sweatman's vast collection of rear derailleurs. It will come as no surprise that he praises The Dancing Chain, describing it as "the single greatest source of information on derailleurs that the world has ever seen (and, quite probably, ever will see)." The two offerings complement each other rather well.

> Buyer's Guide: 23 of the best cycling books for all types of rider

You will notice that this is the fifth edition of The Dancing Chain, promising 'a classic text, revised, updated and expanded'. As Berto wrote about the first edition in the year 2000, 'no commercial publisher would touch a specialized bicycle history book with so many words and illustrations'. However, the idea proved to be successful enough to merit new editions in 2005, 2009, 20112 – and now this one.

Van der Plas Publications seems to produce a lot of updated editions, with over a third of its cycle catalogue being a second edition or later – but is that a good thing? The publisher certainly thinks so, asking you not to "be deceived by 'internet bargains': those are copies of earlier editions. The current edition is significantly expanded and updated. Look for the blue band at the top of the cover." A better reason for avoiding those earlier editions might be that they seem to command the sort of premium prices you would expect from 'collectibles'.

Each updated edition has allowed Berto to cover newer technology, but at this time of rapid development in the area it is frustrating that the very latest products are not necessarily covered: Rotor's hydraulic Uno didn't make it in to this one, for example, and Mr Disraeli Gears lists several other brands that are not covered. Sounds like there is material for a sixth edition already.

If you have one of the previous editions, you have a dilemma: is there enough here to entice you to buy again? When compared with the first edition, you have another 48 pages and four extra chapters; there are 17 years of new developments to read about, with the early history now starting in 1817, whereas before it was 1865. The younger the edition, the less difference there will be to this one, reducing the benefit.

The book has a list price of $49.95 in the US (which is the same as the hardback first edition); that isn't bad for what you get, but the publisher seems to have used an unrealistic (but beneficial) exchange rate to come up with the sterling price of £30 – which results in rather good value for money for us in the UK.

Still a niche subject matter, but this is a welcome update to one of the best reference books about bicycles

Make and model: The Dancing Chain by Frank J Berto

A fascinating account of the birth and development of the modern bicycle - and the mechanism that makes it tick: the derailleur gearing system.

This fifth edition includes many corrections and additions, more and better images, and it covers significantly more material. This is one BIG book.

Updated and expanded fifth edition of the "instant classic" that took everybody by surprise. Now with additional product test information, and many additional illustrations of items ranging from "prehistoric" gearing mechanisms to the very latest components, including the most innovative 2016 product introductions.

How could such a specialized subject find so much interest? Whereas all other cycle history books cover the early development in great detail but have nothing more to say once the modern safety bicycle is introduced at the end of the 19th century, this book picks up where the others leave off. It is the history of the modern bicycle during the last century - or, put another way, the first century of the derailleur bicycle.

The book is packed with fascinating illustrations, including hundreds of Daniel Rebour's wonderfully detailed renderings - many of them never seen in print before.

Thirty quid isn't cheap, but it's been a long time since a $49.95 US price converted to a £30 UK price – and I'm happy to take advantage of that exchange rate!

It lives up to the promise of giving you more information about bicycle transmissions than you thought possible.

It gave me a fuller understanding of every derailleur that I have ever owned – or wanted to own.

Would you recommend the product to a friend? Yes – but there would have to be definite interest in the subject first.

This is a high-quality reference book and fully deserves an 'exceptional' score. It's a shame its rather specialist and technical coverage of cycling history means it won't reach the audience that it deserves.