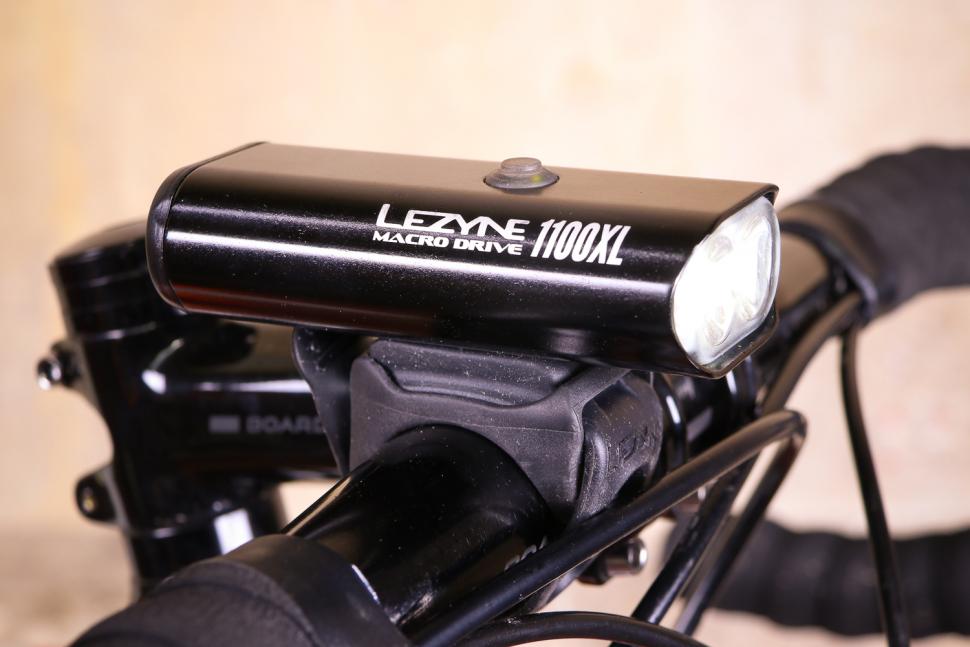 8
10
Great value, powerful and suitable for commutes or trails, though fiddly charge port and doesn't appear as bright as claimed
Weight:
150g
Contact:
www.upgradebikes.co.uk
How we test

The Lezyne Macro Drive 1100XL is a superbly bright light for the money. It's easy to use and solidly built, and you get huge run-times on the economy settings. The charge port is a pain to access and the full beam isn't as bright as claimed, but it will serve you well on unlit tracks and roads thanks to the multitude of beam settings.

The Macro Drive 1100XL replaces the 800XL in Lezyne's performance light range, sitting fourth out of five in the pecking order, above the Lite Drive 700XL. Although it packs a claimed extra 300 lumens it's only gone up £5 compared to the 800XL, to a very reasonable £70 RRP. It's available in black or silver, with a super-strong aluminium construction and a sleek appearance.

The light has seven settings and two different modes. The first mode allows you access to all seven settings, which are blast (650 lumens), enduro (450lu), economy (150lu), femto (15lu), flash (150lu), pulse (150lu) and overdrive (1100lu). Race mode lets you toggle just between overdrive and economy. Mode memory remembers whether you're in race mode or standard whenever you next turn the light on, and which setting you were last using – which is useful if you favour one setting in most situations.

The light flashes blue when you're in race mode and green when you're in standard, and you just hold it down for a few seconds when you turn it on to change between the two.

If you're using the light in urban areas you'll most likely only need to use the pulse or flash settings, with run-times of a massive 18 and 19 hours respectively. Using the average 13.1km cycle commute distance ridden at 21km/h according to Strava as a rule of thumb, most commuters should get at least a couple of weeks out of this light off a single charge. That's impressive.

You get at least 100 minutes out of overdrive and 10 hours on economy, plus a massive 78 hours from the 15-lumen femto setting.

The button changes colour as your charge runs down, eventually going red when you've got 10% of power remaining. In 99% of cases, you'll get home on red.

It's a good job it lasts so long, because when it came to charging, this is where I found my first issue: the charge port for the micro-USB cable is narrow, deep and fiddly, leaving you rummaging around inside to get the pin to connect. Most mini-USB chargers won't fit because the plastic body behind the charge pin will be too wide to for the Macro 1100's port, so you need to use the one supplied.

I have numerous devices that I charge via mini-USB and don't really want to have dedicated chargers using up all the ports on my PC, so this is a bit irritating and something I'd like to see redesigned in future iterations (something Jez agreed with when reviewing the Lite Drive 700XL). You do get a plug supplied, so if you'd rather use up a plug socket than a USB port, this might be the way to go.

Last year, Mike thought the rubber mount on his Macro Drive 800XL moved around far too much, and luckily for me this seems to have been improved on the newer version. I didn't find it problematic on my 31.8mm diameter bar, although there was some slight movement when pressing the button on my cycle path commute with a few potholes and rough sections of tarmac.

The light can also spin full circle on the mount, which means you can arrange it horizontally and mount it to aerobars too. You can get a solid aluminium bar mount if you want ultimate stability, and these are now widely available for around a tenner.

Though it packs a lot of power for a 70 quid light, according to our beam test it's not as bright as other lights with the same number of lumens. Compared with the Niterider Lumina 1100 Boost (£110) and the Cygolite Metro Pro 1100 (£99.95), the difference is very noticeable, with the Macro Drive clearly coming up short. Given the price difference and who/what this light is most suitable for, it's probably not going to be an issue, but a more accurate lumen rating on Lezyne's part would be appreciated. If it is close to the 1100 lumen mark, perhaps the wide beam shape coming from two LEDs means a lot of the light is splayed outwards, so you don't get as much brightness or focus ahead of you. That said, I felt safe going at speed on my commute, which involves plenty of unlit sections, and could easily change back to a lower setting when a fellow cyclist was passing in the opposite direction.

Overall, I think the Macro Drive 1100XL offers a lot for the money, and is well suited to commuters who occasionally need some extra oomph on unlit paths/roads. The beam pattern is a bit wide and lacks some focus, and I'm not a fan of that charge port, but if you can get over that then it's easy to use and lasts ages once on your bike.

Great value, powerful and suitable for commutes or trails, though fiddly charge port and doesn't appear as bright as claimed

7 modes, including a race mode to toggle just between race mode and economy.

It's solid as a rock, with a nice big aluminium body. You can see scratches on the surface with the silver version but that's not a deal breaker.

Mostly, everything about the design is great. I like having everything controlled from just the one button, and the one here is responsive too. The charge port is the only weakness.

It's stiff but holds the light very securely on your handlebar, and it's adjustable to fit any bar size. The light spins 360 degrees so you can mount it horizontally and use it on aerobars too.

Perfect, no water is getting in here.

The overdrive mode doesn't last very long, but otherwise it's excellent, with up to a massive 78 hours on the lowest setting.

Four hours for a full recharge is quick enough for me.

The light isn't as bright as claimed, but I was happy with its performance.

Could survive a nuclear attack from the looks of it.

Not the lightest, but fine for the amount of power it puts out.

Considerably less than other lights with the same claimed number of lumens, and a high quality construction for the price too.

The light isn't as bright as claimed, but I was happy with its performance. It'll last for years, and it's easy to mount and use day-to-day.

The run-time, solid build, and mounting strap. Placement of the button is good for quick changing.

The charge port – it's too narrow and won't accept a standard micro USB charger, such as one that comes with a Samsung phone. You need to use the one supplied or a similar charger with a narrow casing behind the pin.

The Macro Drive 1100XL is a very capable light that will best suit those whose journeys often venture onto unlit roads. It's got everything covered apart from trail capabilities, as it doesn't mount to a helmet and isn't bright enough fo such use. A couple of issues, the charging port and not quite as bright as claimed, but the great price keeps the score up.