9
10
A beautifully presented book about the cycling jersey and all that it stands for
Weight:
1,270g
Contact:
threebackpockets.bigcartel.com
How we test

The Cycling Jersey is the result of one man's passion for a piece of kit that defines cyclists the world over. Naturally the book has wonderful pictures of cycling jerseys (and lots of them), all presented in large, glossy, and colourful splendour. The book wants to be about more than just the actual jersey, though, and has several related articles and interviews. It may be a niche subject, but there is enough here to convince even the most committed Philistine about the beauty of jerseys and the 'craftmanship, speed and style' that they represent.

I sometimes wonder if there any limit to the number of books that can be produced about cycling jerseys. Probably not, because even if limited to road cycling (or just the top-level of pro road cycling, as with this book), there are new designs, stories, and even technologies arriving every year.

Sometimes a team will even have several different jerseys throughout the year, whether because of a mid-season sponsorship change, or perhaps because a new colour of kit has been introduced for a Grand Tour – so there is never any shortage of material for another work on the subject.

It had been a few years since the last major publication about cycling jerseys, The Jersey Project, but then over the last 18 months another three arrived. It started with one by Andy Storey from Prendas Ciclismo, The Art of the Jersey, and was followed by Chris Sidwells' offering, Cycling Jerseys. Now Oliver Knight has bagged perhaps the most obvious title of all for the latest addition to the genre.

I first heard about this book in early 2016 when it was announced as one of the forthcoming titles from the newly formed Velodrome Publishing, and I thought at the time it sounded like something worth seeking out. However, the wait has been over a year longer than expected, for understandable reasons.

As Knight explains, after he had delivered the finished product, changes at Velodrome meant it would no longer be publishing the book. Knight then had to acquire the rights to his own book, and decided to harness the power of Kickstarter to allow him to publish it himself – with complete success.

One thing that you would expect from such a book is lots of high quality images of colourful jerseys. That is indeed what you get, and I would happily have had more. The large format affords plenty of space to each picture, with most of the jerseys having been lovingly photographed by Knight himself. 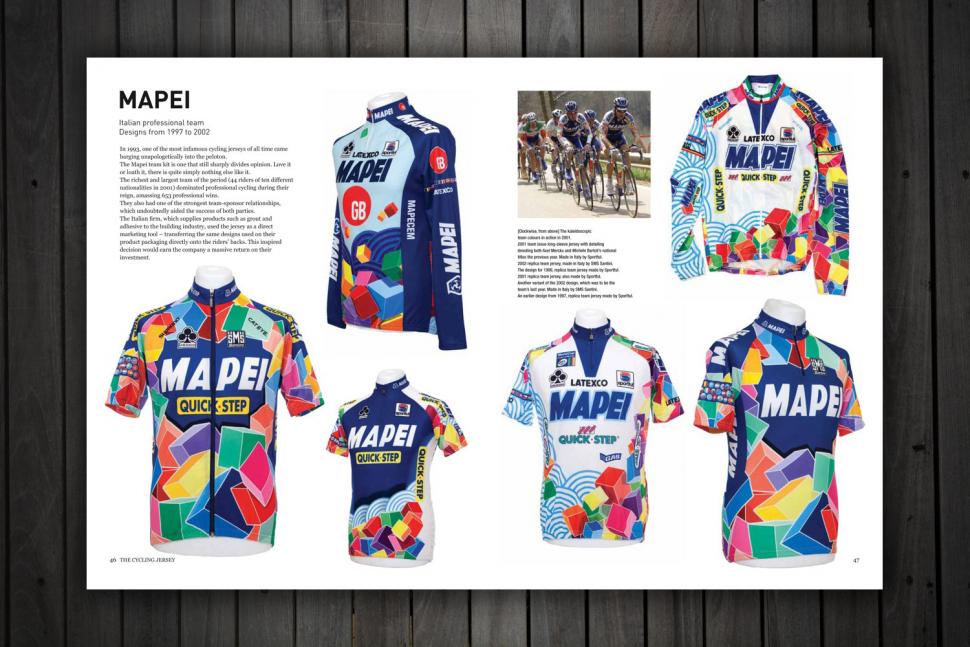 There are 40 pages of jerseys grouped together by team (which makes it easy to follow the evolution of the design over the years), followed by another 10 pages of Grand Tour and Championship jerseys, altogether making up about one quarter of the book.

However, not every team is represented, let alone every jersey from every team. The problem that every author faces is getting hold of suitable jerseys to feature: Knight seems to have a sizeable collection himself, as you can see on his website, and that provides the bulk of the jerseys that appear in the book.

Naturally, the website is constantly being updated as new items arrive – so it is already showing items that don't appear in the book. Sounds to me like there could be scope for an updated second edition.

Rather than limit himself to his own hoard, Knight drew from the collections of five other 'enthusiasts', who are also interviewed for the book. The interviews touch on a number of interesting topics that no doubt affect other collectible items: the increase in fake goods, for example, or the dilemma of whether to sell if the price is tempting enough, and of course regrets over 'the one that got away'. Other jerseys were found at some manufacturers, and the Museo della Bicicletta in Cesiomaggiore, Italy. Knight also had the inspired idea to make use of the pictures that had been taken to illustrate lots in sales at an auction house in Paris, Coutau-Bégarie, such as this one. If you look from lot 656 onwards, it is interesting to see what failed to sell (a Lance Armstrong yellow jersey!), and the prices achieved on what did (€2,000 for an Anquetil yellow jersey).

In order to fulfil his mission to 'do full justice to the history, culture, and craft of the iconic cycling jersey', Knight includes specially commissioned articles from a few other authors, such as William Fotheringham's essay about 'le Maillot Jaune'. Where there is some uncertainty about the yellow jersey's history, I was pleased to see that Fotheringham tries to cover all possibilities.

Looking at the reason for the jersey being yellow, for example, he gives us the options of (a) that was the colour of l'Auto newspaper, or (b) that was the cheapest colour of material available, or (c) it was simply a suggestion by a former rider. He does not even include Chris Sidwells' proposition that yellow was chosen simply because it was the only colour available at the manufacturer, so who knows what the real truth is.

In a section called 'The Creators', various art and designer people from Rapha and Castelli/Sportful provide a fair amount of the usual corporate marketing nonsense – although there are also some insights into design, materials and production. There are no unexpected revelations and no trade secrets are exposed. For me this was the least fulfilling part of the book, although it was redeemed by several more good illustrations.

In the chapter called 'The Riders', Knight 'focuses on six titans of cycling who represent timeless jersey and rider combinations'. It is true that Messers Coppi, Anquetil, Merckx, de Vlaeminck, Moser and Hinault have strong associations with a particular jersey, and that gives Knight the opportunity to include a few more jerseys that did not make it into the main part of the book. The accompanying text provides a little background about the jersey designs, but mostly it is a brief biography of each rider – even if they need little introduction.

At first glance a book about jerseys will not interest everybody, but this one will have broader appeal than most because it is about the jersey 'standing as a testament for the riders achievements, heroics, trials and tribulations'.

Until recently, your best option was to buy directly from the author (using the link above the review), which you can still do: however, be warned that as Knight is based in France, the carriage charge to the UK will be £15. Fortunately, the book is now available from Rouleur magazine's shop (use the 'Buy it online here' link above), with a range of postal services on offer, starting from £3.50.

Make and model: The Cycling Jersey - Craftsmanship, Speed and Style

'The Cycling Jersey - Craftsmanship, Speed & Style' is the first volume to provide an in-depth study into the history and evolution of the iconic cycling jersey.

A 200 page large format coffee table book (21cm x 29cm), illustrated with over 400 images showcasing a wealth of jerseys and cycling ephemera, alongside many classic and previously unpublished archive images.

Including the first hand accounts from the riders who wore them, the designers who create them and the collectors who now covet them.

The book is complete with interviews with the world's leading jersey aficionados and collectors, and the creative teams behind the breakthrough and defining designs of the modern era from racewear brands Castelli, Sportful and Rapha.

'The Cycling Jersey' is a book created for, and with the participation of, the growing network of devotees who appreciate the culture, craft and heritage of these iconic items.

This book is created to the highest standards, encased in a hard backed cover complete with dust jacket, with pages printed on heavy 150gsm 'Creator Silk' stock which feels wonderful to the touch.

The space given over to the large clear images of colourful jerseys.

The space given over to anything that was not large clear images of colourful jerseys...

There is no doubt that the book achieves its intended goal extremely well, so it should get a good score – but I am conscious that it won't appeal to everybody.