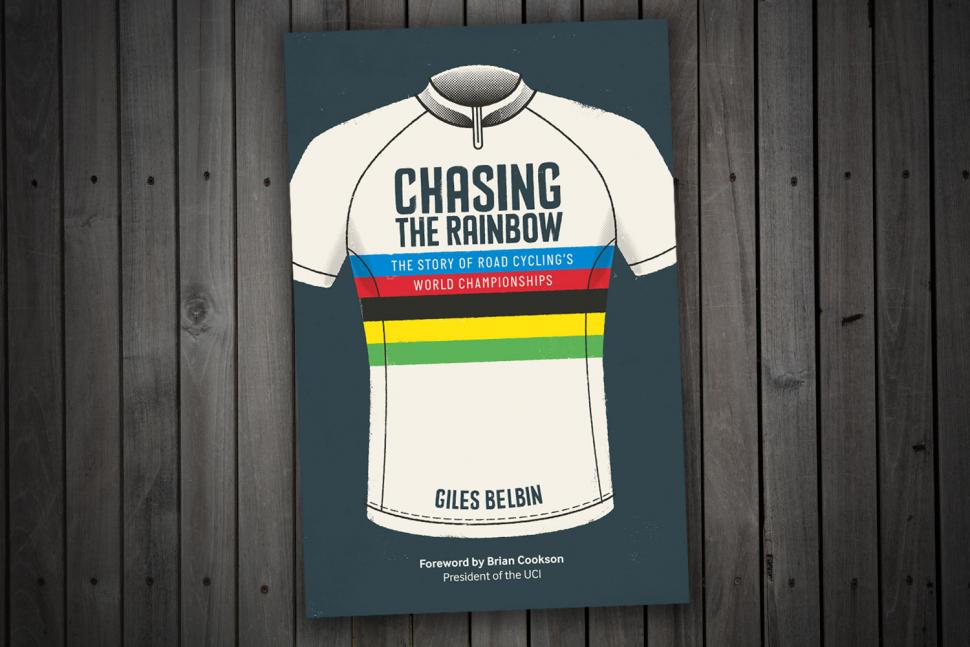 Chasing the Rainbow: The story of road cycling's World Championships

8
10
A well-researched history of the top tier of cycle racing, supported by interviews with some key players
Weight:
620g
Contact:
www.quartoknows.com
How we test

With the recent cycling World Championships fresh in the memory, Giles Belbin's Chasing The Rainbow arrives at an opportune time and provides an entertaining history of the main events. In it, Belbin recounts many of the intriguing stories that surround the Worlds, backed up with interviews with some of the protagonists.

As Belbin makes clear at the beginning, the book 'concentrates on the UCI's road world championships and specifically the elite category of road races for men and women'. The individual time trial gets a chapter, 'the junior amateur and under-23 races are occasionally touched on', but you will look in vain for mention of some of the more recent championships such as mountain bike, cyclo-cross, BMX, trials, artistic, cycle-ball and para-cycling.

Over the years the Worlds have sometimes produced a winner who is not really 'the best cyclist in the world', which the title might suggest. At best, he or she may be one of the best on that day and on that course, but even the UCI would probably accept that whatever season-long points rating was in place at the time was a better indicator of overall ability – currently that could be their own World points ranking, or even the WorldTour ranking.

Throughout the book the biggest names in cycle racing sit alongside the names of riders who, frankly, achieved little else of note – but it is as interesting to read the stories of when the 'wrong' person won as when the favourites prevailed, even if there have always been claims that such a result devalues the championships.

As you'll already know, riders in the Worlds are organised into national teams, unlike any other race in the year – and Belbin discusses some of the unnatural alliances that arise as a result. A good example concerned Tom Southam and Charlie Wegelius in 2005. They were in the British team to ride in support of Roger Hammond, but for the rest of the year they rode for the Italian team Liquigas. Apparently there was 'an agreement to assist the Italian team in controlling the first half of the race before abandoning'. I guess that the choice they made helped to pay the bills, but it meant neither ever rode for the national team again.

That special jersey has gained a reputation for bringing bad luck to its wearer during the year it is worn: the 'curse of the rainbow jersey'. Belbin reports on a study that concluded: 'The cycling world champion is significantly less successful during the year when he wears the rainbow jersey than in the previous year, but this is best explained by regression to the mean, not by a curse.'

There are, of course, plenty of examples in the book to support both sides of the argument, and 'the curse' does not seem to have caught up with Peter Sagan yet.

Belbin recounts the history of the events in a broadly chronological fashion, along with a brief summary of the races, but mixes it up with interviews with several of the winners. Some of those winners have been interviewed many times before (such as Stephen Roche), but others are altogether rarer – such as four-time winner 80-year-old Yvonne Reynders (1959, 1961, 1963, 1966).

As Belbin goes back in time he is forced to be more creative in his choice of interviewee, so team-mate Barry Hoban stands in for Tom Simpson (1965), and Marniek Kint for his grandfather Marcel (1938).

Belbin's book is not the first about the Worlds; in fact, it is not even the first this year (as Les Woodland got there first). However, within its specific focus it is probably the most comprehensive and up-to-date.

At the end of the book you will find a list of every elite (or professional) medal winner (male and female) from the mass-start and individual events. After that are six pages of 'end notes', detailing all of the material that Belbin has researched. The lists of magazines, websites and books is impressive – and would be useful for any follow-up reading.

A well-researched history of the top tier of cycle racing, supported by interviews with some key players

Make and model: Chasing the Rainbow: The story of road cycling's World Championships

The complete history of both the men's and women's road World Cycling Championships including the famous routes, momentous victories and the characters, climbs, and of course, the riders behind the infamous pursuit for one of road cycling's greatest prizes: the Rainbow Jersey.

Jam-packed with exclusive rider interviews with previous champions, including Stephen Roche, Cadel Evans and Nicole Cooke, and with foreword by Brian Cookson, this book tells for the first time the history of one of one of road cycling's greatest prizes.

Exclusive interviews and features including:

Not many pictures, so a little expensive, even for a hardback; however, significant discounts are readily available.

You will discover new and interesting stories about the Worlds.

Focused entirely on the top tier of men's and women's road events.

Covers a lot of well-trodden ground well, with some additional interest from the new interviews.