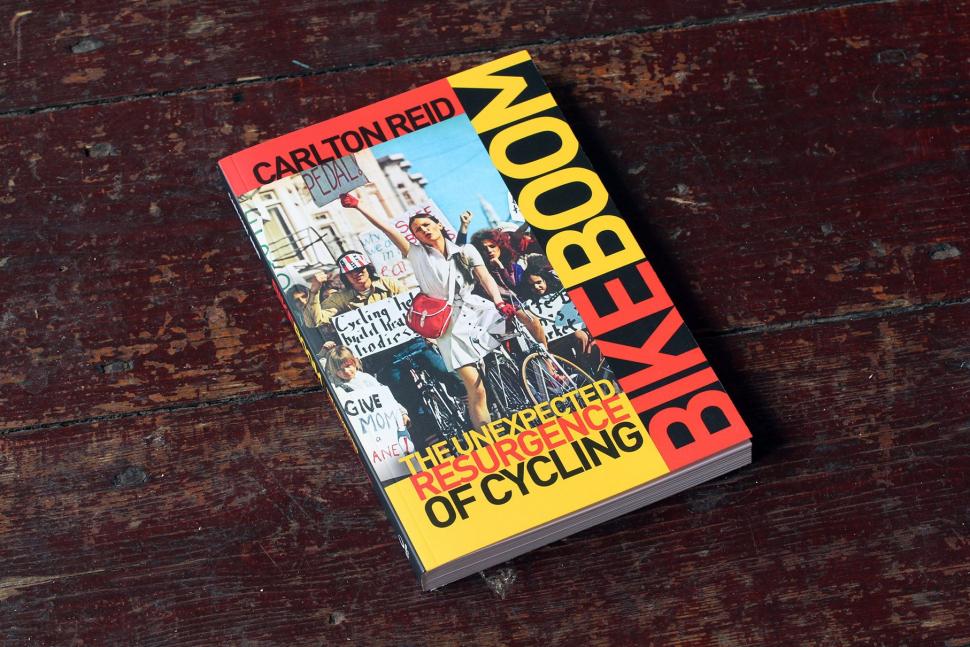 Bike Boom The Unexpected Resurgence of Cycling by Carlton Reid.jpg

Bike Boom: The Unexpected Resurgence of Cycling by Carlton Reid

9
10
A well-researched, well-argued book that should be compulsory reading for anyone involved in the provision of cycle facilities
Weight:
411g
Contact:
islandpress.org
How we test

'Bikes are booming!' 'Bikes are not booming!' Both statements are true: it just depends on what you are measuring and over what period. The message from Bike Boom, by Carlton Reid, is that despite appearances, bike usage is not as good as it has been, and is certainly not as good as many of us would like it to be, so what can be learnt from history to help create the conditions that might lead to a genuine bike boom?

Some of you will have been involved in a mini-boom in the bike market, such as when mountain bikes first appeared, or more recently the MAMIL-led growth in road bikes – but in many countries, says Reid, 'there is no bike boom right now, nor has there been one in the United Kingdom or the United States since the early 1970s', when '10-speed racers' proliferated.

References to a bike boom are nothing new, having started back in 1896, and Reid demonstrates their popularity with the help of an interesting piece of software called Google Ngram Viewer, 'an on-line book-scraping tool' that searches 'more than 5 million books...published between 1800 and 2000'.

A real bike boom would require the use of bicycles to be integrated into everyday life, much as advocated in Peter Walker's book Bike Nation, and I suspect that most readers of this website would regard that as a desirable thing. At times Bike Boom filled me with hope: the acceptance of everyday cycling has happened before, so it must be possible for it to happen again; then there was the despair when you realise how many people seem to have no interest in it happening. And occasionally frustration upon realising that several opportunities to progress have been missed.

Stevenage is given as an example of a new town that had good cycling facilities included in its design right from the start, yet it failed to achieve the level of cycle use expected: 'residents of Stevenage chose to drive, not cycle, even for journeys of two miles or less.' I am simplifying the arguments, but the conclusion is that people must want to cycle if you want them to use the facilities, and to help them reach that decision you might have to actively make driving less attractive. Carrot and stick.

Naturally the experience of bike use in the Netherlands is covered in detail, but it is clear that such success was not easy, and there is no simple template to follow to achieve the same results. We are told of the many factors that led to the success that we see today, such as the effectiveness of local protests (about the death of children on the roads) 'because the Dutch system of government is more amenable to face-to-face campaigning, with local politicians having meaningful power.'

In addition, the 1973 oil crisis came along at the right time: people realised the value of a means of transport that was not dependent on oil. We had the same oil shortage, but other conditions were not right for it to make a lasting change in our cycling habits.

Bike Boom is the second of three books promised by Reid, and takes over where the seminal Roads Were Not Built for Cars leaves off, covering the period from 1905 through until the late 1970s. Once again Reid repeats his impressively thorough research and produces a fascinating history of bicycle facilities and usage, combined with the level of persuasive campaigning rhetoric that you would expect from a self-confessed 'card-carrying vélorutionary'.

As reported here, there has also been a spin-off project to re-discover (and in some cases revive) our long-forgotten cycleways, which is another big but worthwhile project. Having been successfully funded though Kickstarter, work is well underway on the office-based research and field-based exploration – but it is going to take longer than expected because 'thanks to the publicity generated by this project, more mileage has come to light' than the 280 miles originally known about.

Not surprisingly, some elements of Roads are repeated (and expanded upon) in Bike Boom, but Roads continues as a standalone work; it is still relevant, and a second edition seems to have addressed the previous availability issues.

> 19 of the best books for cyclists

As you would expect from any good reference book there is an extensive bibliography at the back; there are also extensive footnotes, which can be found online. Even without the book, the footnotes are full of interesting nuggets – such as a reproduction of a poster used in America to encourage car-sharing during WWII, with the strapline 'When you ride alone you ride with Hitler!'

Later on there is a link to an incredible story that shows how almost anything can be turned into a debate about helmet use: a sleep-walking women falls off a balcony, suffers brain damage, and as a result wants cyclists on hire bikes to wear helmets!

Some of us were just starting our life in cycling at the end of the period covered by the book, which adds a greater level of personal interest than was possible with Roads. I was reminded about the Bristol cycling advocacy group Cyclebag being formed in 1977: I did not know that their name claimed to be 'an acronym for Conserve Your Calf and Leg Energy Bristol Action Group', although I did know that it begot Sustrans.

I am looking forward to the third book already – but by the time it does appear, will we have made any more progress towards a real and sustainable boom in day-to-day bike usage?

Bike Boom is available in many formats, but if you want the iPad-specific version it might be worth waiting until the update 'with additional illustrations and videos and audio files' is available.

A well-researched, well-argued book that should be compulsory reading for anyone involved in the provision of cycle facilities

Make and model: Bike Boom The Unexpected Resurgence of Cycling by Carlton Reid

Bicycling advocates envision a future in which bikes are a widespread daily form of transportation. While many global cities are seeing the number of bike commuters increase, this future is still far away; at times, urban cycling seems to be fighting for its very survival. Will we ever witness a true "bike boom" in cities? What can we learn from past successes and failures to make cycling safer, easier, and more accessible? Use of bicycles in America and Britain fell off a cliff in the 1950s and 1960s thanks to the rapid rise in car ownership. Urban planners and politicians predicted that cycling would wither to nothing, and they did their level best to bring about this extinction by catering to only motorists. But in the 1970s, something strange happened – bicycling bounced back, first in America and then in Britain.

In Bike Boom, journalist Carlton Reid uses history to shine a spotlight on the present and demonstrates how bicycling has the potential to grow even further, if the right measures are put in place by the politicians and planners of today and tomorrow. He explores the benefits and challenges of cycling, the roles of infrastructure and advocacy, and what we can learn from cities that have successfully supported and encouraged bike booms, including London; Davis, California; Montreal; Stevenage; Amsterdam; New York; and Copenhagen.

Given that today's global bicycling "boom" has its roots in the early 1970s, Reid draws lessons from that period. At that time, the Dutch were investing in bike infrastructure and advocacy-- the US and the UK had the choice to follow the Dutch example, but didn't. Reid sets out to discover what we can learn from the history of bike "booms" in this entertaining and thought-provoking book.

Carlton Reid is the executive editor of BikeBiz magazine, a publication for the bicycle trade based in the UK, and author of Roads Were Not Built for Cars (2015).

Does an excellent job of informing, educating, inspiring, frustrating...

I could relate more directly to the most recent history.

The book has an American publisher, so you have to accept American words and 'incorrect' spelling – even more so than was the case with Roads.

Every bit as good as Roads – although not quite as much of it.