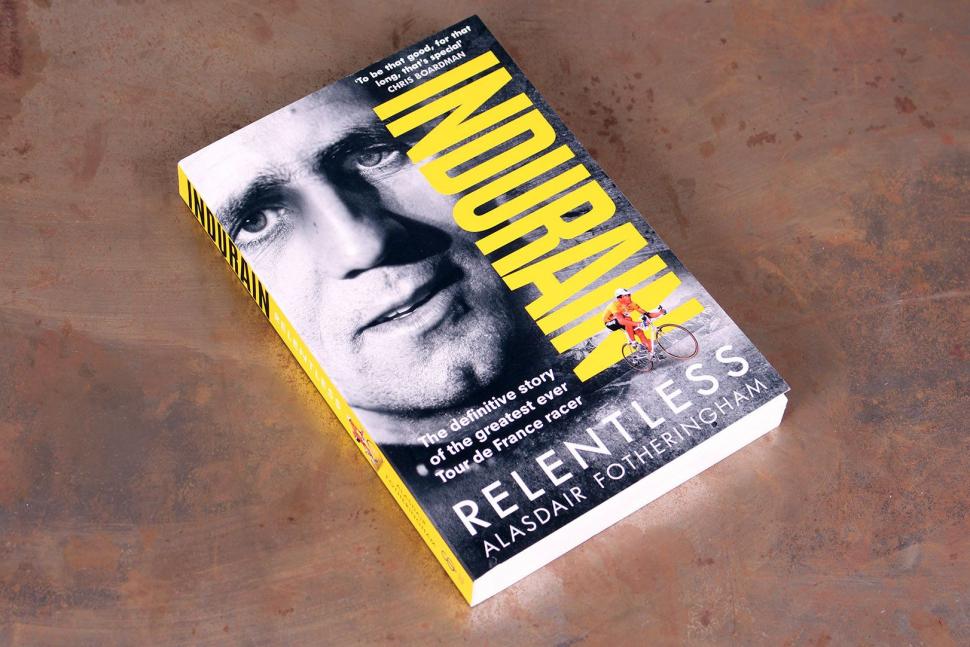 7
10
A good but incomplete biography – still not the definitive Indurain story that we need
Weight:
447g
Contact:
www.penguin.co.uk

It seems only fitting that we review a book about Miguel Indurain just as Chris Froome closes in on some of the records that he set at the Tour de France. Indurain – Relentless, by Alasdair Fotheringham, may be one of the best books about the Spanish rider so far, but it is not as definitive as I'd hoped for.

Having spent over 50 days wearing the yellow jersey already, Froome is closing in on the 60 days that Indurain managed – although he won't get there this year. That would leave only Bernard Hinault (on 75) and Eddy Merckx (on 96) ahead of them both.

Indurain also stands as the last member to join the elite group of riders who have managed five wins at le Tour, joining Eddy Merckx, Bernard Hinault, and Jacques Anquetil. Froome is currently the best candidate to join the club next, but only Indurain can officially claim to have won five in a row – now that Lance Armstrong's results can no longer be mentioned.

Indurain was well known for being an undemonstrative and quiet individual, and that desire to keep his private life to himself seems to have continued after his retirement from racing – which is presumably why you won't find many books about the man. The Mousehold Press is a publisher of quirky cycling books, and seems to have done more than any other publisher by translating a couple of books about Indurain from Spanish into English: first there was A life on Wheels in 1998 (now out of print), and then A Tempered Passion in 2002; and the now defunct Cycle Sport magazine once produced a short book about him as part of a series of biographies about top riders.

Apart from that, I am not aware of any other books in English about Indurain, which is an extraordinary achievement for one of the Tour's greatest ever riders – and a source of frustration for those who want to know more about such an accomplished and respected rider.

Fotheringham seems to be the ideal candidate to redress the balance, having already produced biographies for two other important Spanish riders: Luis Ocaňa and Federico Bahamontes.

Fotheringham delivers a thorough account of Indurain's racing career, charting his long, steady ascent to the top of the sport, benefiting from the conservative (or even unadventurous) policy of rider management by his race teams.

It is possible that Indurain could have won the Tour a year earlier, because in 1990 'Banesto, quite simply, got the wrong leader'. The team remained focused on Pedro Delgado to win, with Indurain in support, even though 'the student had now begun to be better than the teacher'. Is that another experience that Froome has in common with him?

Fotheringham interviewed several key players from Indurain's career for the book: his brother Prudencio, team managers, teammates, and other riders all have something useful to say. The problem is that we never get to hear Indurain's views directly from the man himself, and find out little about his life beyond cycling. There are some quotes from various sources, but nothing new.

While this is little different to any of the previous biographies, it is a weakness in something claiming to be 'the definitive biography which gets to the heart of the enigmatic Miguel Indurain'. It is a well-written book about an extremely impressive cyclist, but it doesn't really move the game forward and give us the one thing that fans of Indurain would like: the thoughts of 'Big Mig' himself.

There are still many interesting insights into Indurain's career, including this example from a round of contract negotiations one year: 'Indurain refused [Zor] on the grounds that the 50 million pesetas he was offered by directur sportif Javier Minguez "was an awful lot of money": "I expected any answer but that one, and I didn't know what to say," Minguez said later.'

Later on, 'according to Unzué, when his own team offered him a contract, Indurain has been the only rider in their 36-year history who responded, "Wouldn't that be too much?"'

If Indurain's rise to the top was logical and steady, his retirement from the sport was unexpected and sudden, and was not handled in a way befitting a man of his status. It appears that relationships with the team had broken down, and he was made to do races against his will; as with so many of the stories I would love to hear Indurain's thoughts about this part of his career.

> 19 of the best books for all types of cyclists

Perhaps the beginning of the end came at the 1996 Tour de France, where Indurain's reign came to a dramatic end at the hands of Bjarne Riis. Fotheringham covers the many theories as to why Indurain did not perform that year, ranging from him being past his best at the age of 32, that the weather was colder than was ideal for him, or that racing later into the 1995 season had shortened his winter recovery period.

Surely the answer is that Indurain was up against riders that we now know to have been taking drugs? The podium that year comprised Riis, Jan Ullrich, and Richard Virenque.

Indurain himself seems to have avoided the allegations of doping that surround so many riders from that era, even though he did have 'a moment': he once tested positive for Salbutamol, 'a substance used to treat asthma and other breathing difficulties under the commercial name of Ventolin'. Apparently the race doctors had been informed and Indurain 'had the medical certificate from the UCI that authorised his use of Ventolin'. Similar episodes are still happening today, although public reaction seems to be rather different now.

We also discover that 'Indurain worked at certain points in his career with Francesco Conconi [and] Conconi's reputation is mixed, to say the least'.

I expected Fotheringham to have a lot more to say about this, as he has shown himself to be very knowledgeable about the use of drugs and the effect on cycling in a previous book. I don't think you can give a complete picture about cycling in that era without setting it in the context of increasing drug use – and this is another area where Indurain's comments would have been welcome.

Miguel Indurain is Spain's greatest cyclist of all time and one of the best Tour racers in history. He is the only bike rider to have won five successive Tours de France, as well as holding the title for the youngest ever race leader in the Tour of Spain. This is his story.

As the all-conquering hero of the 90s, Indurain steadfastly refused to be overwhelmed by fame; remaining humble, shy and true to his country roots. Along with his superhuman calmness, iron will-power and superb bike handling skills, he was often described as a machine. Yet 1996 saw Indurain, the Tour's greatest ever champion, spectacularly plummet, bringing his career and supremacy to an abrupt end.

In Indurain, Alasdair Fotheringham gets to the heart of this enigmatic character, reliving his historic accomplishments in vibrant colour, and exploring how this shaped the direction taken by generations of Spanish racers - raising Spanish sport to a whole new level.

Good, but not as definitive as I'd hoped for.

It is one of the few books about Indurain.

It is still not the definitive book I hoped to see.

Indurain's impressive achievements make for a great story, but without direct input from the man himself some questions remain unanswered.