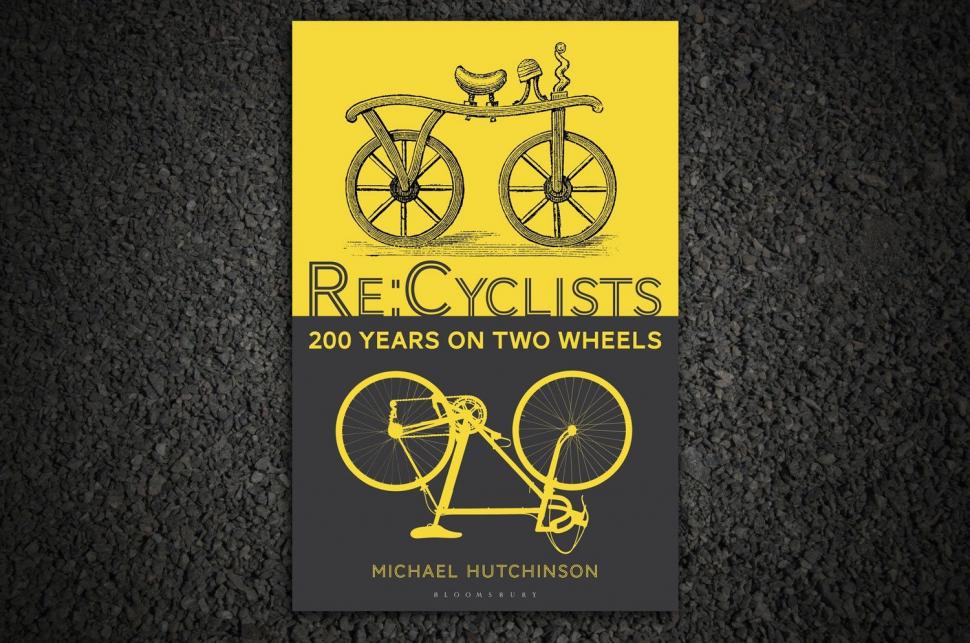 8
10
An entertaining and informative look at the development of the bicycle, and how we got to where we are now
Weight:
465g
Contact:
www.bloomsbury.com
How we test

Re:Cyclists – 200 Years on Two Wheels is far from being the first attempt to cover the history of cycling, but as of today it can claim to be the most up-to-date – and it is also one of the more readable ones. Michael Hutchinson will already be known to many for his entertaining and humorous writing, and this book carries on in the same vein.

As part of his research, Hutchinson trawled though the archives of the magazine we now know as Cycling Weekly, but which started off as Cycling in 1891. While the magazine's archives are a strong presence throughout, the book is by no means limited to 'the Comic's' view of developments in cycling.

Hutchinson manages to introduce an element of slapstick comedy by riding a few of the machines he talks about, including (as you would expect) a 'penny farthing' bicycle: his ride was 'accompanied by well-meaning shouts of advice that just made me feel like a stewardess trying to land a jumbo jet by following instructions from air traffic control'.

As the sub-title of the book suggests, '200 years on two wheels' celebrates the 200th anniversary of human power on two wheels, but depending on your definition, that is not necessarily the same as 200 years of bicycles.

The build-up to that 1817 starting date involved several poor harvests, exacerbated by an erupting volcano that affected global temperatures. This meant there was not enough food for both people and animals, and one of the many results was that horse numbers fell. Ultimately this led to the arrival of the 'draisene' (or hobby horse) as an alternative means of personal transport: it had two wheels but no propulsion system, and is effectively the layout still used today with the balance bikes that children learn to ride on.

There is some explanation of each subsequent stage in the development of the bicycle, but you might be surprised to discover that there are no accompanying illustrations or pictures: this is not the book for you if your primary aim is to understand the technical details of the bicycle's evolution.

It was the introduction of pedal power that produced something closer to what we would recognise as a bicycle, but there is considerable uncertainty as to who first invented such a machine, let alone where and when. Like many before him, Hutchinson wisely restricts himself to discussing the contenders, taking obvious delight in the lack of clarity.

History is only a little more definitive on some other 'firsts': James Moore is generally accepted as the winner of the first recorded bicycle race in 1868, yet the programme for the day 'suggests that the race Moore won was the second event of the schedule – for velocipedes with wheels of over one metre'; no result is found for the race for smaller wheeled machines that should have preceded it.

Hutchinson proposes that 'there have only been five real innovations in the whole history of cycling': the draisene, the first bicycle, chain drive, pneumatic tyres, and variable gears – which reminds us what effect a single decision or some good luck had on the development of the machine we know today.

Any history of the bicycle will also cover the arrival of motor vehicles, and it is fascinating to read about attitudes at the time: in the early years cars were just another means of transport with which bikes shared the road. Can you believe that 'Cycling magazine was welcoming enough to change its name in 1900 to Cycling and Moting, 'moting' being the most popular of the names for the new activity'?

Similarly, 'the Cyclists Touring Club sought to change its constitution to allow the admission of motorists'. Many years later the club was less inclusive, arguing against the requirement for cyclists to use a rear light: 'Their stance was that avoiding a collision was the responsibility of the overtaking vehicle, and that a compulsory rear light put some of the onus for avoiding a collision on the cyclist, and was thus an encroachment on a cyclist's basic freedom.'

Among the many stories that were new to me, one concerned the well-known illustrator Frank Patterson. He provided delightful line drawings to Cycling magazine for nearly 60 years, despite not being a cyclist himself. Not only that, 'his work was drawn entirely from postcards and photographs...he reproduced them [and] added a cyclist'. These days we can use Photoshop to be similarly misleading.

In the final chapter Hutchinson comments that it is almost impossible to predict the future and how cycling will develop, after all, 'no matter how carefully you might comb through all of the optimistic articles...you don't find anyone who predicted twenty-first century cycling'.

We may not know what will happen to cycling over the next 200 years, but it is likely that there is a future for cycling in some form – and a future for books about the history of cycling.

An entertaining and informative look at the development of the bicycle, and how we got to where we are now

"Somewhere in a German forest 200 years ago, during the darkest, wettest summer for centuries, the story of cycling began. The calls to ban it were more or less instant.

"Re:Cyclists is the tale of what happened next, of how we have spent two centuries wheeling our way about town and country on bikes – or on two-wheeled things that vaguely resembled what we now call bikes. Michael Hutchinson picks his way through those 200 years, discovering how cycling became a kinky vaudeville act for Parisians, how it became an American business empire, and how it went on to find a unique home in the British Isles. He considers the penny-farthing riders exploring the abandoned and lonely coaching roads during the railway era, and the Victorian high-society cyclists of the 1890s bicycle craze – a time when no aristocratic house party was without bicycles and when the Prince of Wales used to give himself an illicit thrill on a weekday afternoon by watching the women's riding-school in the Royal Albert Hall.

"Re:Cyclists looks at how cycling became the sport, the pastime and the social life of millions of ordinary people, how it grew and how it suffered through the 1960s and '70s, and how at the dawn of the twenty-first century it rose again, much changed but still ultimately just someone careering along on two wheels."

Hutchinson has an entertaining writing style that is always worth reading, so this is no ordinary history book.