7
10
Not so much a folding bike, more a full-size machine with a small footprint
Weight:
10,650g
Contact:
www.montaguefoldingbike.co.uk
How we test

Folding bikes are always a compromise between the folded package and the ride characteristics. It's not a straight line correlation but the basic rule is that the bigger-wheeled bikes are easier to get on with on the road, but not as easy to hoik onto a train. They don't get bigger wheeled than the Montague: this is a full sized 700c bike, so don't expect it to fit in your glove box.

It's a full-sized ride though, and a great option if you want a 'proper' bike for town riding but could do with saving a bit of space, or you have a mixed commute and you need something to stick in the car. 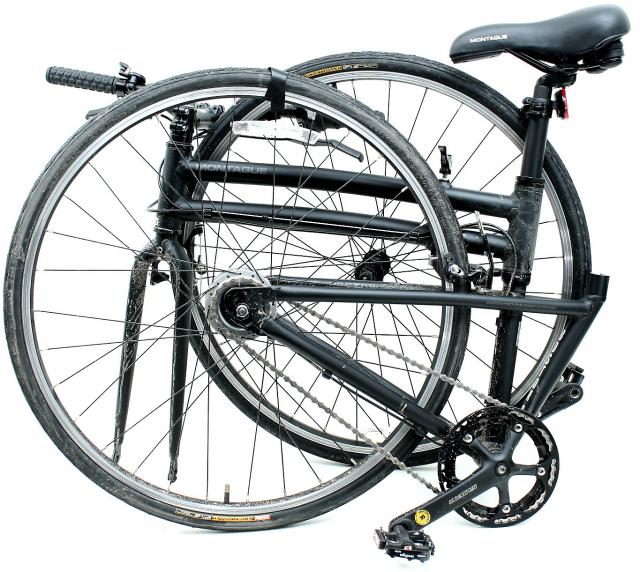 The main talking point of the Montague is the frame design. It's a full-sized Aluminium folding platform that comes in a couple of different incarnations for MTB (branded as SwissBike) and road wheels. The fold is by virtue of a rotating seat tube section: undo the quick release on the top tube and the rear triangle folds round, and you can drop the seat to make the whole thing a bit more compact. It's not like a Brompton or other small wheeler that you can hop onto the tube with, but it is a useful size reduction if you want to fit it in your boot or stash it at home, and it will fit in the bottom of an inter-city luggage rack too. 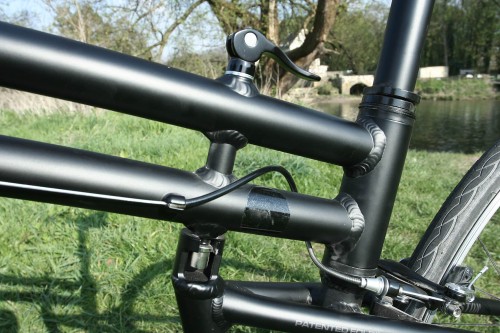 The fold can be achieved in 'less than 20 seconds' according to Montague; in practice I found it took about twice that after a few goes. That's plenty quick enough for the kind of situations you'll be folding or unfolding it: in the car park, at the office and so on. This incarnation folds out into a city singlespeeder with flat bars and a 42x16 gear that's about right for urban riding. The kit is all dependable if largely uninspiring stuff: SR Suntour cranks, Formula hubs on Alex rims, Promax brakes and a bunch of unbranded bits and bobs to finish.

So to the ride. Usually when you're talking about a folding bike there's plenty to talk about on the subject of how the fold affects the ride, but not here. I wouldn't advocate riding blindfolded but were you to try it you'd be hard pressed to tell this was a folder, there's nothing to give it away. The mainframe is nice and stiff without being overbuilt to compensate for the fold, the geometry and riding position completely normal with a fairly upright stance that's just about right for shortish town journeys. You can even fix it up if you want, the folding mechanism doesn't affect the integrity of the rear triangle and a flip-flop hub is standard equipment. 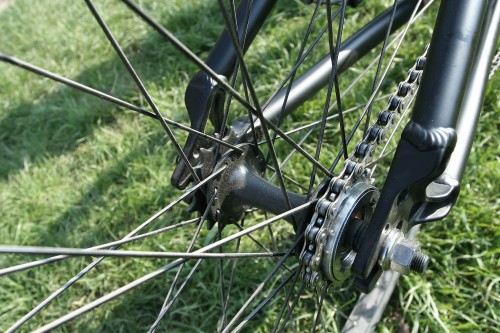 The single gear is a good balance between flat speed and climbing ability, okay for the steep hills of Bath but better suited to London where it also got an outing during testing after we lobbed it on the train. The steering is neutral and the bike's reasonably low overall weight means you can muscle through the traffic easily. Haul on the anchors and you can pull up without fuss; the brakes aren't top drawer but there's plenty of power there.

If you're going to be spending lots of time hauling the bike about in its folded state then it's worth investing in the carrying bag. The straps attach to the frame of the bike and the hardy cover encloses all the greasy/sharp bits. It's much easier to carry once it's bagged, and your boss will be glad that your bike isn't leaking its fluids onto the office carpet as well. 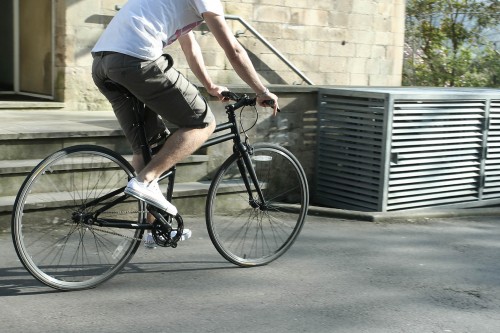 What are the downsides? Well, you pay a premium for that folding technology, meaning that you don't get quite as much singlespeed for your cash, and the bike though functional isn't as stylish as some of the non-folding fixed gear competition. But if you struggle to find space for a full-size bike and you don't want to sacrifice ride quality, the Boston is a good quality bike with a full-sized feel and a reduced footprint, and definitely one to look at.

We've now had a chance to ride not one but two Montagues; the singlespeed one above and the Nexus 8-speed version of the same bike, pictured below. 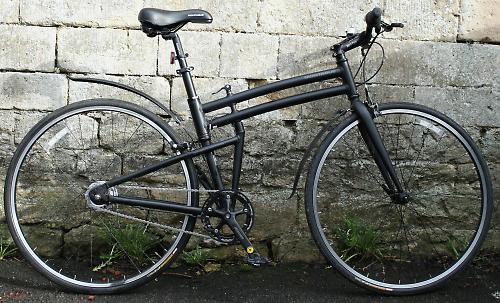 Effectively it's the same bike, just with a slightly different build. Instead of the singlespeed drivetrain you get Shimano's Nexus 8-speed hub, with a twist shifter to tun you through the ratios. The dropouts are forward-sloping rather than backwards horizontal (to be honest, either would work fine here) but aside from that the frame is the same one. Current list price for this model on the Montague UK website is £720, £150 dearer than the singlespeed (now £570). So, how does it stack up?

Well, given that it's the same frame the same riding notes mostly apply. The bike doesn't ride like a folder; there's no hint of any hinge-related flex and the neutral steering and ride position make it feel like the mid-range hybrid it would be without the folding mechanism. Eight speeds is a lot more than one though (it's seven more: ed) and that makes it into more of an all-purpose utility machine and extends its range and, I'd say, appeal. 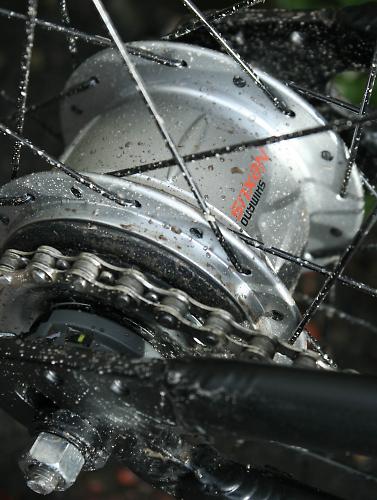 The Nexus hub lacks a bit of the refinement of the dearer Alfine in the shift but it's a likeable unit and there's no one gear that feels particularly laggy. In fact the Boston 8 was happy to clip along at a very decent pace, managing the 5-mile commute home (up a big hill) only a couple of minutes slower than my benchmark Genesis Equilibrium. The ride position doesn't exactly encourage standing up effort but the Boston is more than happy to spin up the hills; for lumpy Bath the bike could be geared down a ratio but the range is pretty good.

Given that you may decide on longer rides on this Boston, you'll probably want to swap the saddle out for something a bit better built, as it starts to make itself known at around the 10-mile mark and is pretty uncomfortable not long after that. It's not a difficult swap though.

Weight wise the Nexus bike stopped the needle at 12.65kg (27.9lb), 2kg heavier than the singlespeed version, but it wasn't noticeably more slovenly as a result. In fact I was impressed at the Boston's ability to keep a good pace.

The more utility-oriented 8 comes with quick release mudguards as standard. These attach to brackets fitted to the brakes and can be clipped on and off with a flick of a cam lever. They only extend backwards and they're a bit bouncy, but the do a decent job of protecting you from the worst of the road spray. If you're packing the bike up small, they're very simple to remove.

The Boston isn't for everyone but it's a simple job to imagine a scenario where it's the best option by far. If parking space at either end of your commute is limited, or you want to do a mixed commute with a fairly long ride, then this is certainly a machine to look at. The 8-speed version extends the range somewhat at the cost of an extra 2kg, but overall is the better of the two. Don't think of it as a folding bike, more a full-size machine with a small footprint.

The Montague Boston™ is a full size, single-speed folding bike featuring 700c- wheels for ideal riding in the city. It also includes a flip-flop hub so the rear wheel can operate as either a fixed-gear or free-wheel setup. The Boston is a fast bike for the urban rider who wants simplicity with excellent performance. The Clix quick release and the patented folding system convert the bike from full-size to trunk-size (35 x 12 x 28 inches) in less than 20 seconds.

* Folding into a car trunk.

20 seconds for the fold is optimistic but otherwise there's little to argue abut here.

Folding mechanism is neat, welds are tidy, finish is good

It's happy enough about town and unflustered by unsurfaced paths

Considering it folds it's plenty stiff, no different from a non-folding bike

The odd click to suggest chain alignment is maybe a touch out, but other than that no issues

Easy to ride just about covers it. Well behaved and comfy.

Would you consider buying the bike? I don't need a full size bike that folds, so no

Would you recommend the bike to a friend? Yes if it fitted their needs

I usually ride: whatever I\\\'m testing...  My best bike is: Genesis Equilibrium with Ultegra 6700 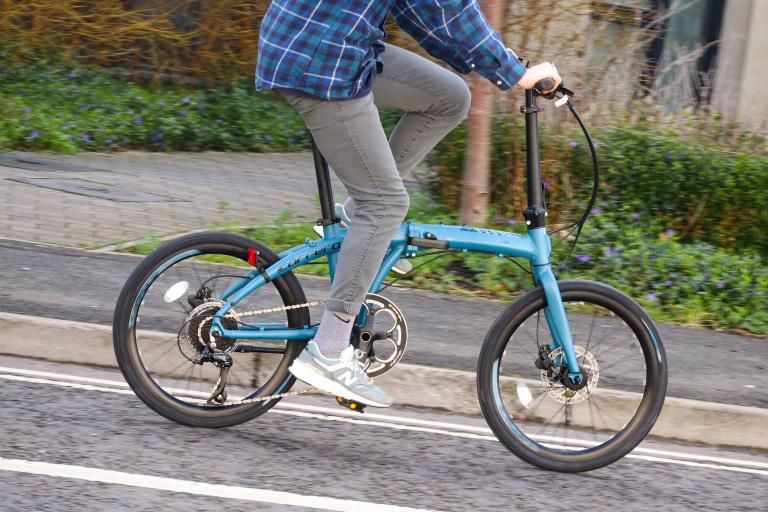 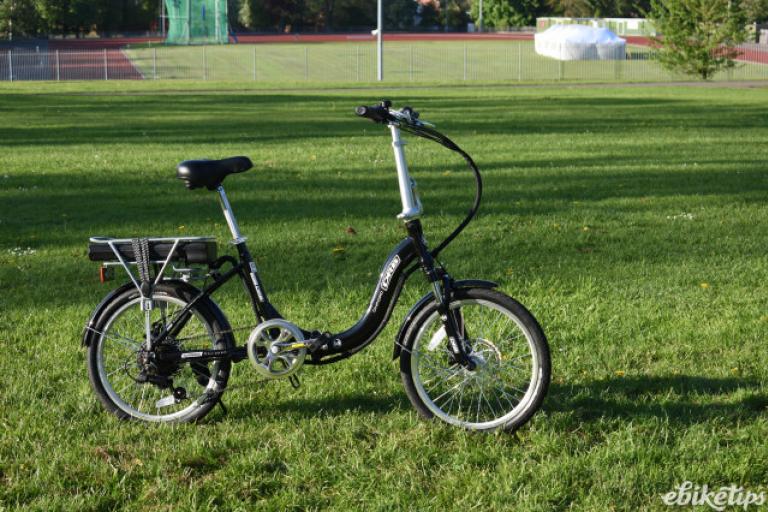 Certainly one of the better budget e-folders out there 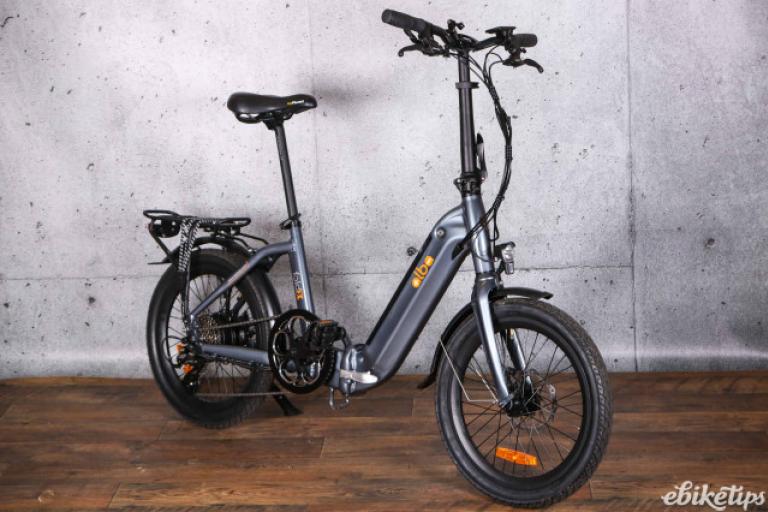 A little heavy, but a decent bike for shorter, flatter commutes that won’t break the bank 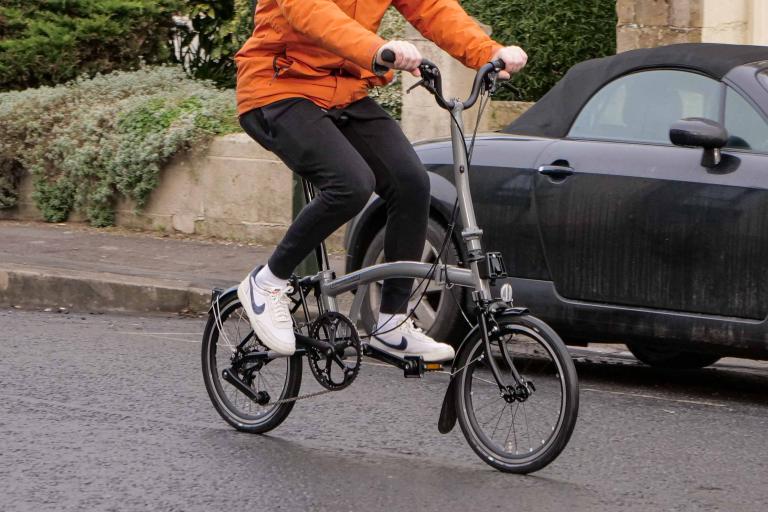 Fantastic and innovative high-performance option from Brompton, but it is pricey