8
10
Simple to use camera with smart auto-editing feature that makes it easy to create and share a film
Weight:
192g
Contact:
www.tomtom.com
How we test

TomTom isn't the most familiar name in the burgeoning action camera market, but its Bandit HD camera, launched last summer, is a decent GoPro alternative that's easy to use, with a smart editing app feature and high quality video recording.

Perhaps the standout feature of the Bandit is one that attempts to address the issue of what to do with all those hours of unedited video it's so easy to record with a video camera. You can spend forever on a computer editing footage you've recorded on a ride, and it's for that reason a lot of video never makes it past the editing stage, let alone onto a website like YouTube or Vimeo. The Bandit aims to make getting your video edited and shared online simple.

TomTom has developed its own smartphone app, which connects to the Bandit via Bluetooth or wifi, and allows you to edit the video all without having to go anywhere near a computer. 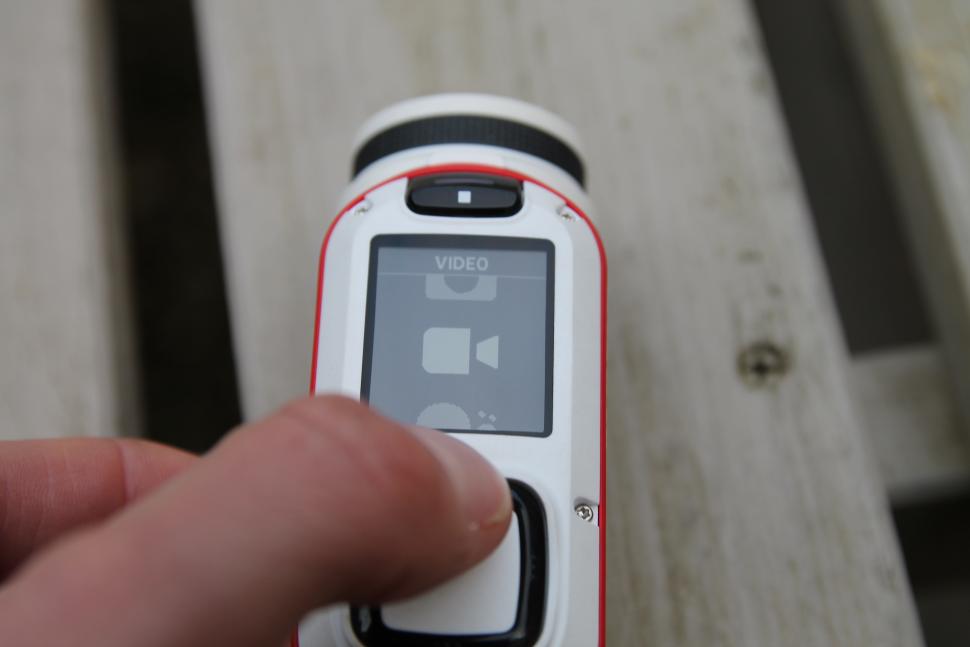 It gets better. Using the novel tagging feature, either manually with a button on the camera, or automatically using the built-in sensors, the app can produce an 'edit' of your tagged highlights.

The built-in sensors include GPS, so the camera can automatically highlight any high-speed, or high-altitude sections, or heart rate, and the smartphone app will pull these highlighted clips together into a cohesive edit. If you're not happy with the order, you can manually edit or, simpler than that, just shake the phone to rearrange. It's a process that works easily and is a smart way of helping you to produce a short film that is then easy to share.

It might sound like a gimmick, but it works. If you like the idea of filming your cycling but don't want to spend hours in front of a computer editing the video, this is a foolproof way to share your adventures.

Another smart feature of the app is the live view, so you can make sure the camera is perfectly aligned before filming. 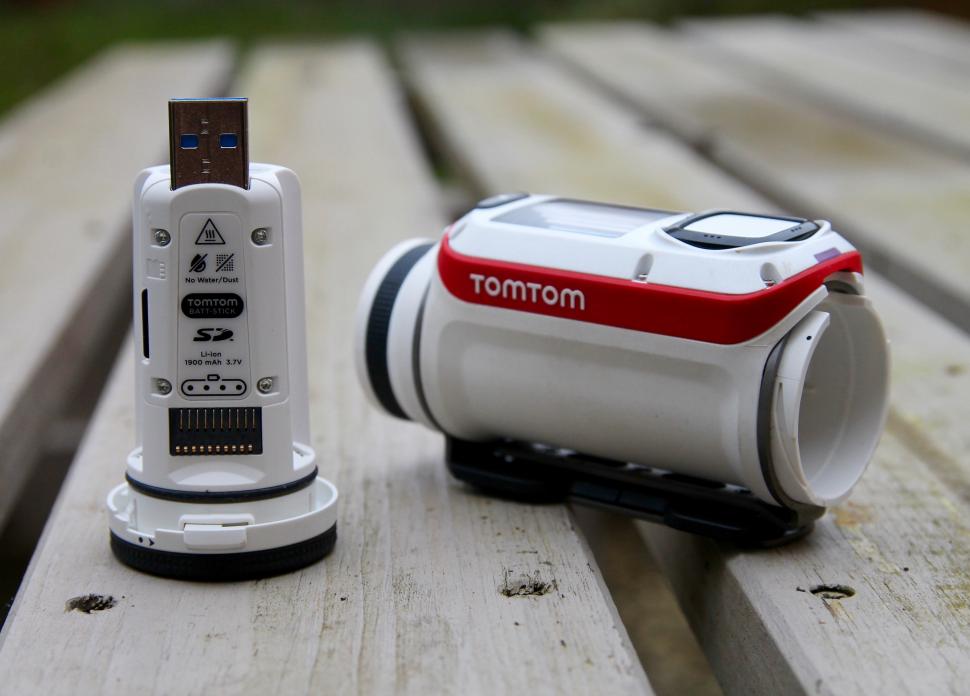 If you do want to plug the camera into your computer to download all the raw footage, it's as easy as pulling the back of the camera out and revealing the neat integrated USB stick. No cables, no nonsense. With the camera in two parts like this, you can access the Micro SD card. Recording time from the 1900mAH battery is decent: you're looking at about 3 hours filming 1080p at 30fps, enough for most uses. The battery is easily charged as mentioned already, just pull the camera apart to utilise the integrated USB stick.

The f/2.4 lens and 16Mp sensor provide impressive clarity and it copes well in low light. Colour balance is good but the camera does struggle a bit in rapidly changing light conditions, like going from bright sunlight to dark woods for example. The wide angle lens provides a good field of view, though; it's good for road cycling and weaving through traffic, and it works well whether mounted high up on a helmet, or low down on the handlebar. 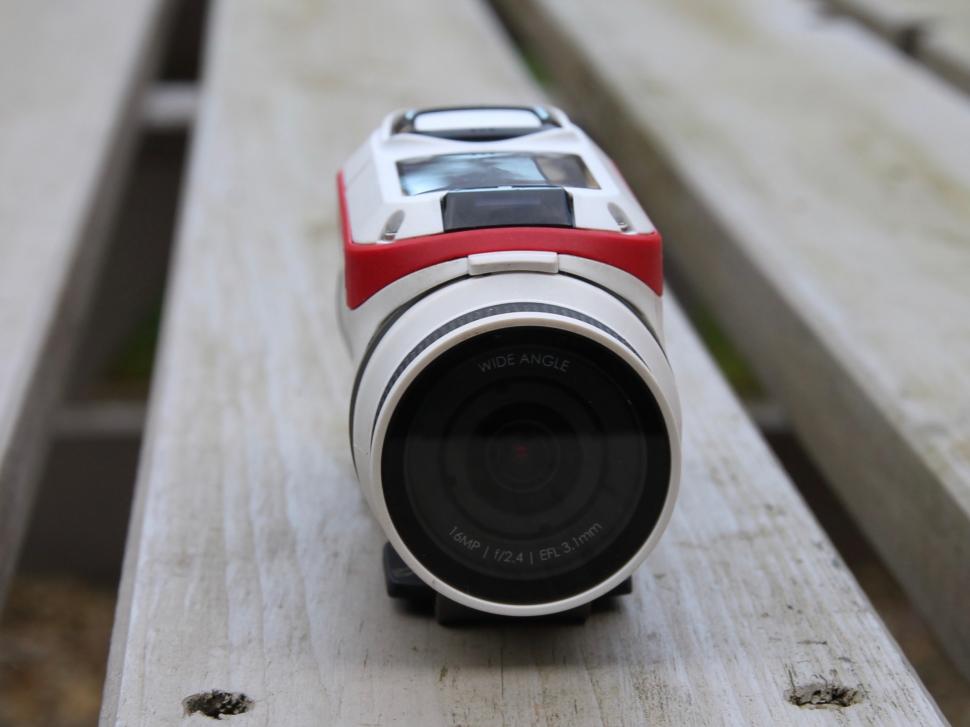 The audio quality suffers when on the move and could do with some sort of muffling device, though a benefit of the unique mount (more on that in a minute) is very stable and solid recording. Even recording off-road produce acceptable smooth footage. 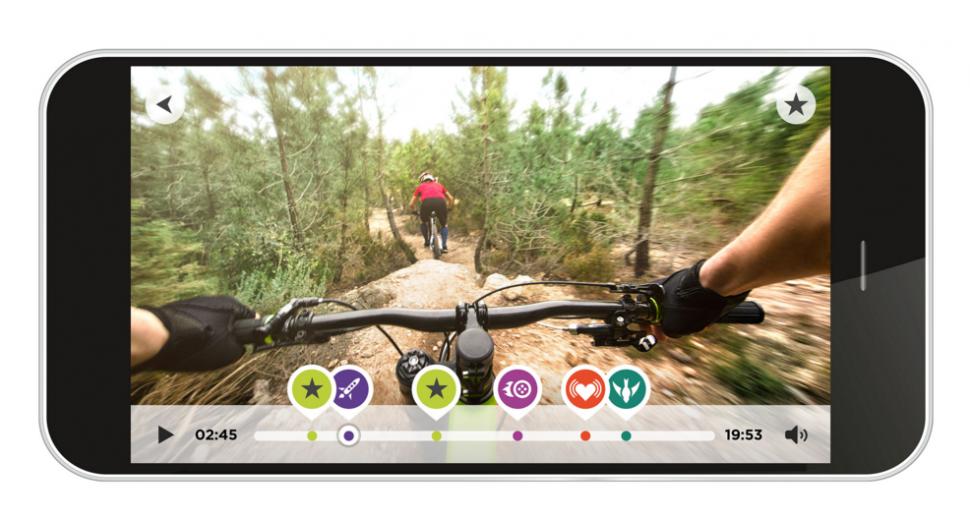 TomTom has paid a lot of attention to how people use action cameras, and the Bandit is a joy to use. The barrel shape is compact and, using the supplied mounts, fits easily onto a helmet or handlebar, or a section of the frame if using one of the sticky 3M mounts.

You get a display that shows the essential information about each mode, and it's flanked by the menu control button. This is the same four-way toggle button that TomTom uses on its range of watches. It's very intuitive – you don't need a manual for this camera. At the rear of the device is the power on button, which also doubles as the highlight button that lets you tag clips when on the move. Also on the top of the unit is the stop recording and power off button.

Underneath the camera is the mounting system, which cleverly locks into the mount with two small spring-loaded release tabs. Another neat feature is that the camera body can be rotated independently of the mount. This opens up a whole raft of different mounting positions, and means you can mount it on the side of the frame, or a helmet, and still shoot level. 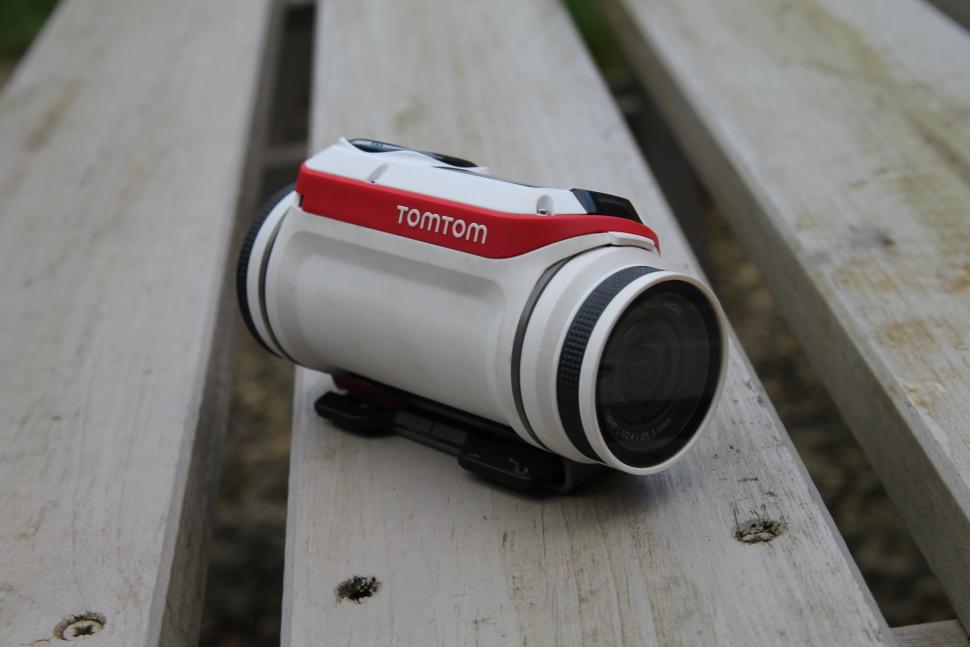 The mount is a clever design and provides impressive security and no unwanted bounce or wobble. TomTom supplies its own range of mounts and there are all the usual ones, and it provides one that makes it compatible with GoPro mounts. That's a smart move because there are many GoPro aftermarket mounts now available. The only negative with the mount is that it adds a bit of extra height, but it's fairly minimal. 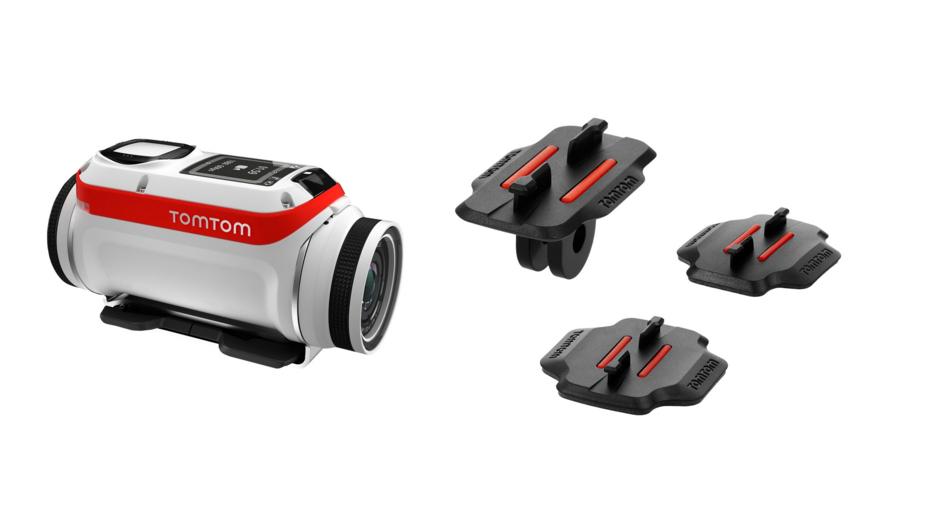 The Base Pack (tested) provides a couple of sticky mounts and a GoPro adapter, while the Premium Pack bungs in a bicycle mount, a remote and a waterproof lens cover. You're probably better off sticking with the Base Pack and getting some GoPro mounts for any particular filming you want to do.

I found the Bandit a tough camera during use. It's sturdy on the mounts and if you do bin it, the camera can survive the odd knock. It's rated to IPX7 standards so it's splash proof and copes with rain, dust and mud just fine. An optional waterproof case is available if you want to take it underwater.

The camera is reasonably light (192g) but it's heavier than a GoPro. You can certainly feel its weight when it's mounted to a helmet.

The Bandit is a well-designed camera that's easy to use, with good battery life and impressive video quality. The action camera market is starting to look a little crowded, but the Bandit brings something new to the table. It's a very user-friendly product, and is a viable alternative to the market leader.

And if you shop around you can get the Bandit for a third off the list price, at which point it looks like a really good deal.

TomTom says: "The TomTom Bandit GPS Action Camera. Just shake your phone for a ready-to-share edit of your highlights. Now every hero can share his skills.

"Integrated 1900mAh battery and microSD card housing for 3 hours recording of 1080p30 footage without any cables.

"Instant Playback. Use your in-app viewfinder for instant alignment and quick video previews."

Build quality is good, it's tough and well made.

The button layout makes it an intuitive camera to operate, and video quality is very good.

You don't want to be dropping an expensive camera on a regular basis, but the Bandit does survive a few knocks. It's splashproof and will survive some rain and mud.

It's not as light as a GoPro.

There's a lot of choice in the action camera market, and it's worth shopping around because I've seen the Bandit at up to a third off. The ease of use and nifty auto-editing feature add value to the product above its competitors.

Does everything you want from a camera, with the companion smartphone app making it a doddle to create and share a video from your ride or adventure.

No manuals needed, it's a simple camera to use. The mount is very secure and it comes with a GoPro adapter.

It could be lighter and video quality in more challenging light conditions could be improved, but I'm being really picky here.

The Bandit is a well designed camera that is easy to use, with good battery life and impressive video quality. The action camera market is starting to look a little crowded, but the Bandit brings something new to the table and it's a very user-friendly product, and a viable alternative to the market leader.

And if you shop around you can get the Bandit for a third off the list price, at which point it looks like a really good deal. 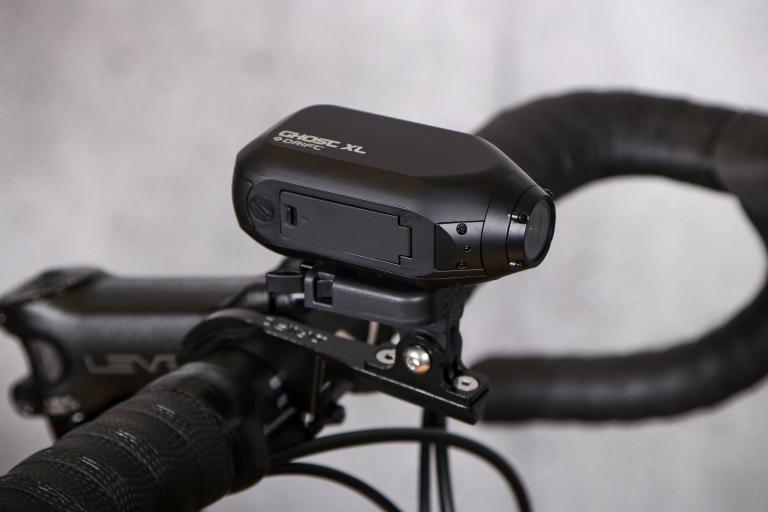 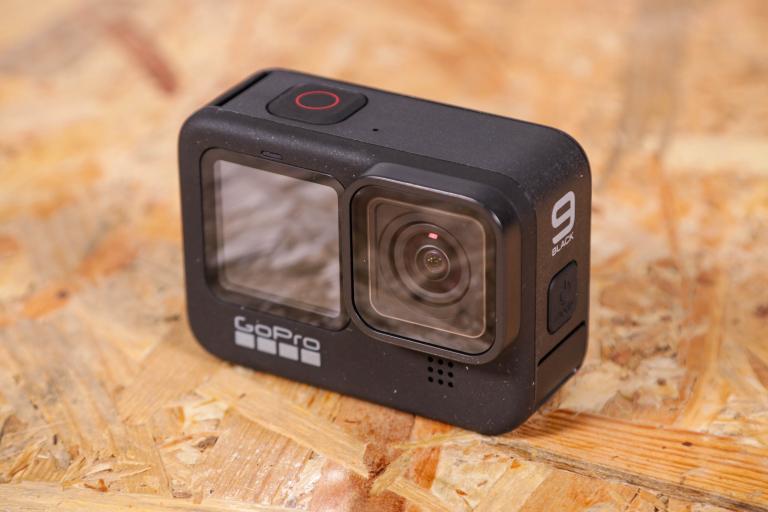