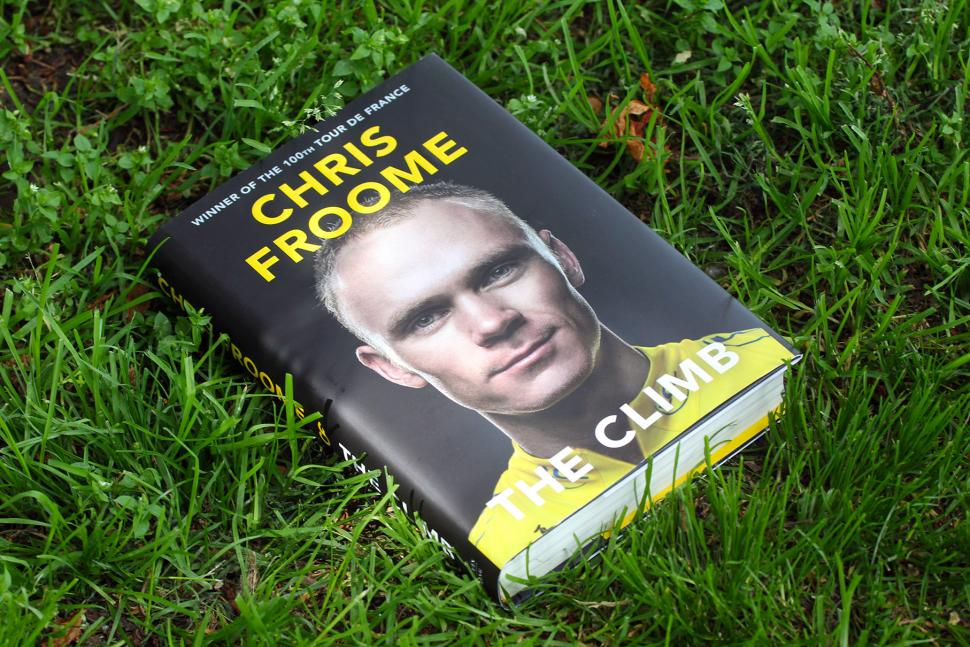 The Climb by Chris Froome

9
10
Well-written autobiography that reveals much of the man and the fierce competitor behind the sometimes bland public persona
Weight:
683g
Contact:
www.amazon.co.uk
How we test

Chris Froome is one of the more enigmatic Tour de France winners of recent years, a rider who British fans have found hard to warm to, despite him being a British talent on a British team. With the assistance of Sunday Times sportswriter David Walsh, he manages to make himself less puzzling in his autobiography, The Climb.

In late 2012 Bradley Wiggins' third autobiography came out. My Time featured Wiggins on the cover in yellow, looking simultaneously beaky and morose, like an anteater with no ant hill. My Time was an update on the two previous authorised biographies in which Wiggins finally conquered being bought up in Kilburn, his liking for booze and the pressure of expectation.

2013. Another year, another Team Sky Tour de France winner and another cover photo of a rider in yellow. This time it's Chris Froome on the cover of The Climb looking like Chris Froome looks: pleasant, cheerful, friendly, yet curiously devoid of distinguishing features or flaws, like something from C&A's window display. Even with the sculpture of the best footballer's three point studio lighting, Froome's face seems to defy analysis.

Ned Boulting had the same problem in a feature in Rouleur magazine prior to last year's Tour de France. Boulting spent a few days in Monaco with Froome. They chatted, strolled, laughed, had some gritty black and white photos taken of the pair of them hanging out with some grubby-vested Gauloise-puffing fishermen but Boulting finished the article by admitting that he still didn't know what Froome was all about and what actually made him tick.

Part of the problem for British fans is a lack of shared experience. Representing Great Britain after growing up in in foreign lands you have little in common with the Great British winter club riding and mudguard brigade. If David Millar had grown up in Gwent or even Ghent rather than Hong Kong (wasn't suspected of reading books without pictures in) he maybe would've had an easier ride from the Great British Public when busted for doping.

Froome seems to share the same label; the private school educated ex-pat tolerated for his successes rather than embraced as one of the lads. Fortunately with David Walsh at the helm The Climb goes quite a way to dispel any lingering thoughts of Froome as a polite and bland enigma. Although you'd expect a mid-contract Froome to deliver a Team Sky marketing tool, The Climb isn't afraid to dish out criticism and a large chunk of Kenyan dry candor.

Froome's upbringing in Kenya is a little different from the standard tale of cycling roots we know so well: the wizened club svengali, local bike shops chipping in wheels and our hero finally making it all the way to sharing a flat in Manchester with riders who never do the washing up. Surely there aren't any British rider memoirs that can advise you how to stop a 10 foot rock python crushing you to death? Grab it by both the head and tail and unwind it counterclockwise is Froome's advice. Typical Froome. I suspect Shane Sutton's advice for dealing with a snake would involve reaching for a rock.

I also don't remember any British rider who's first proper coach was black and had dreadlocks. In his time David Kinjah had ridden at the Commonwealth games for Kenya and for an Italian pro team. Froome's reminiscences of being the only white kid in a training squad skimming along dusty national park roads is rich stuff. Not as rich though as Kinjah's favourite recovery food – avocados and cocoa powder mashed up with sugar. I can't see that catching on in Yorkshire.

The strangely muted respect that greeted Froome's win in the 2013 Tour de France was quickly followed by snipes at Froome's loyalties and whether he should have stayed Kenyan in nationality and become Africa's first Tour winner. Froome's extensive and pretty bitter memories of the petty, corrupt shambles that was the Kenyan Cycle Federation and it's chief official Julius Mwangi goes a long way to explaining why Froome wasn't waving a Kenyan flag on the stage in Paris last year.

The stories of incompetence are extraordinary. One stage of a gruelling tour of Egypt left Kenyan rider Michael Muthai stranded alone in the desert unnoticed, even by the broom wagon. With Mr Mwangi and his support car sight-seeing at the pyramids it was pure luck that a soigneur from the Polish team should be late to the next stage hotel and find a bike by the side of the road in the dusk. Muthai, severely dehydrated by this stage, had covered himself over with sand in a trench dug preparing to try and survive a cold desert night.

After another support debacle at the 2006 Commonwealth Games Froome put Mwangi's email password to good use and enters himself in the World Championships in Saltzberg as the entire Kenyan team. He used further steely ambition to doorstep Rod Ellingworth and the slow climb through lesser European teams and up the ranking to Team Sky began.

Of course the meat and gravy of The Climb has to be Froome's side of the story on his relationship with Bradley Wiggins and again Froome delivers with careful detail. The starting point in the Wiggins/Froome power struggle was the electrifying 2011 Vuelta with Wiggins fighting to salvage his season and Froome fighting to keep his contract with Sky after a lack-luster period suffering from bilharzia. By the first rest day Froome's and Wiggin's already uncomfortable room share had gone all pear-shaped (without the cocoa) after Froome had beaten Wiggins in the stage 10 time trial and pulled on the leader's jersey.

"Yesterday I was a bargain-basement domestique having a good week; today I was commodity."

Understandably Froome was soon in a room of his own. "Myself and Brad never really bridged that gulf of mannerly silence." Team Sky's boss Dave Brailsford was now in a quandary but it is odd in hindsight, given the existence of psychologists like Steve Peters, why Team Sky didn't grasp the nettle and sit down with the two potential GC contenders and formulate a plan for 2012 face to face.

Froome finds it odd too, but with the plan still in place for a Wiggins TDF win, only a vague contract addition stipulating Froome can go for stage wins if Wiggins is safe is agreed. Incredibly, on the Team bus in July 2012 avoidance of the issue is still there. Froome it seems wasn't alone in finding Wiggins enigmatic and unreadable, with feedback from Wiggins only coming via management. "It's as if he has his circle of people around him all the time who muffle our idea of him."

Of course support of Wiggins' careful tour bid in 2012 was severely tested by Froome on the notorious stage 11. He confirms what was pretty apparent at the time: he thought Wiggins was safe when he wasn't, and he was buggered if he was going to respect team orders and lose a stage he could win.

Froome reminds us that "The history of cycling is littered with instances like this" and concludes ruefully that "I was the guy who turned back with the blue light flashing".

The panic this one action caused throughout the Team Sky management makes fascinating reading from Froome's point of view. Froome's action had asked the question "When do variables and control stop and raw talent take over...?" he asks.

With Brailsford's careful planning around Wiggins as the chosen rider for 2012 the answer that day was that Wiggins was ready to pack his bags and storm off home if Froome was going to carry on grandstanding the climbs. Froome goes back to a support role. The rest is history, as are all the post-2012 speculations that Wiggins would contest the Team Sky top spot in 2013.

For many Froome will always be the disloyal teammate who slightly soured the first Tour win by a British rider but Wiggins was only ever going to win that year by winning the time trials and time trialling the hills. The plan was successfully executed and as such it was a worthy win. Wiggins' wife rounded on the critics who called Wiggin's win boring. "All this panache business – they can kiss my arse, these people. Who's got panache? These people that go on stupid pointless attacks?"

Froome answered that question the following year when he stormed off up Ventoux in yellow to take the stage win. Froome understood that magical moments in cycle racing history are often more about taking risks rather than marginal gains, and panache in Grand Tour cycling is often a good time trial rider who is willing to prove he can out-climb the best.

After crashing out this year next season will be a whole new test for both Froome and Team Sky and Froome's carefully crafted polite persona and bland post race comments will no doubt continue unchanged. Having read The Climb the enigma is no more. It's a relief to know that Froome has edges and team mates with belief in him. Despite the smiling, friendly face on the cover The Climb is a well written account by a ruthless competitor with little doubt in his abilities.

Make and model: The Climb by Chris Froome