East London bike maker Foffa is best known for creatively-finished, colourful singlespeed bikes. Eponymous designer Dani Foffa turns the whole idea on its head with the Urban, a carefree round-towner in none-more black with a seven-speed hub gear for hill-friendliness and versatility. It's practical, and its a lot a lot of fun. 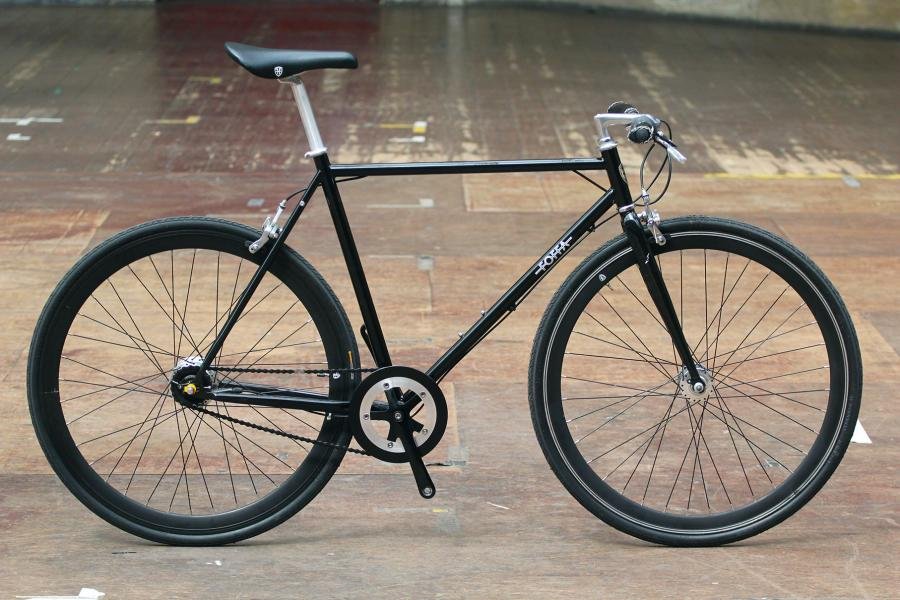 1 Despite its weight, it's surprisingly nippy

The Foffa Urban weighs a bit over 13kg, or about 29lb in old money. You can't help but notice that when you pick it up and all that mass makes itself felt on climbs, but when you use the Urban for its intended purpose, you really don't notice it. It rides lighter than the scales suggest. 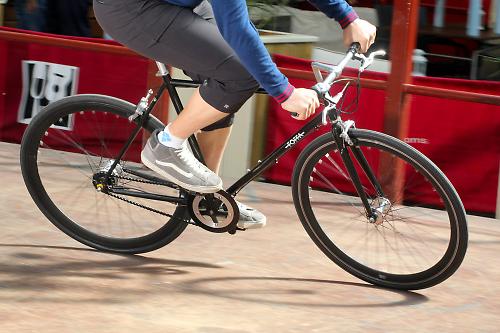 Of course that could be because round town you're worrying far more about dodging potholes, buses, and cabbies in the permanent state of road rage they've all suffered since Uber came to town. But whatever the reason, it's perfectly pleasant for short-to-medium-range blatting around.

In fact, it's more than pleasant, it's lots of fun. The bars are narrow enough for traffic gap-storming without crossing into knuckles-against-the stem fixie hipster territory and the handling is steady and forgiving without being dull. 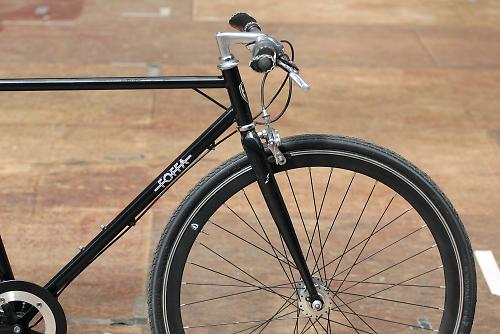 It also looks striking, in a stealth, none-more-black way, and it got compliments on its appearance when I parked it outside my barber's the other day, which is surely a good sign.

The Urban's been my main round-town ride for the last couple of months and it's been a reliable and trustworthy companion. 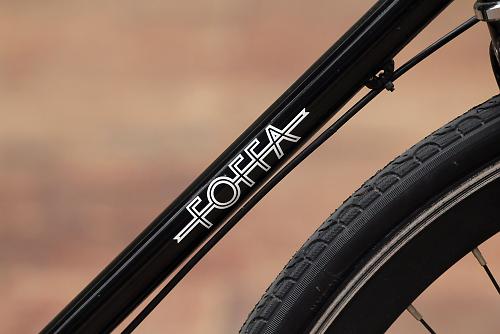 All that said, lugging it up to a second-floor flat would get old really quickly. Foffa says his 2015 version is going on a diet, with lighter wheels to save a bunch of weight. 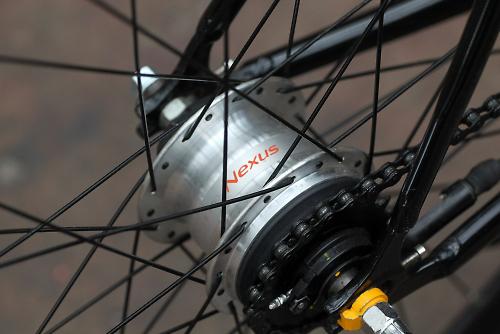 For a round-town bike hub gears have so much going for them, it's a mystery anyone would use derailleurs. Click, shift and away you go with no need to worry about a fragile dangling gear change mechanism getting covered in road grime. That'll be especially nice in the winter.

You can't feel the claimed inefficiency of the hub gear either. In theory hub gears waste some of your power in the effort needed to turn all those internal cogs and wheels against each other. In practice you can't tell. You could probably measure a few seconds' difference in the office run under identical conditions but with traffic and red lights, when's that going to happen? Better to forget the engineering and enjoy the convenience. 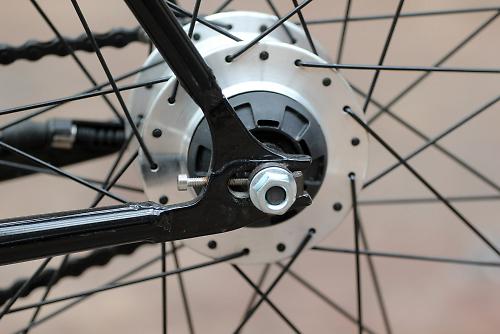 The Shimano Nexus 7 hub gear has a range of 244 percent. The trade-off for its simplicity and ease of use is that you don't get the gear range of a typical double-chainset system, which is more like 340 percent. But in practice all that means is that you have to choose the gear range you'll use most.

For the flatlands of Cambridge, I spent most of my time in the middling gears, never used the top ratio and hardly ever the second-from-top. If I lived somewhere hillier, I'd fit a bigger sprocket to drop the whole range and enjoy gravity's free ride on the descents. It took me a while to realise why the shifting direction felt odd though. Turning the twist-grip shifter towards yourself puts you in a higher gear. The last twist-grip I used extensively was a SRAM Grip-Shift in the 90s, and that worked the other way. Nothing wrong with the way the Shimano shifter operates, but the 20-year persistence of muscle memory is a bit startling. Or I'm just an old fart who's set in his ways.

Aren't you proud of me for getting through a whole section about a gear system called Nexus 7 without making a single Blade Runner reference? 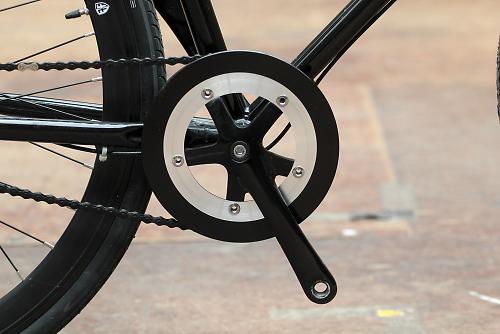 It has a chain guard. Not a huge one, just a simple extra hoop of metal on the outside of the chainring, but it's enough that you can hop on in normal trousers and the chain won't eat the hem. 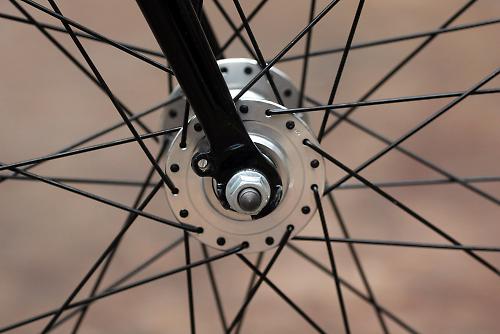 In other concessions to practicality, the fork and rear dropouts have mudguard eyes and there are rack mounts on the seatstays, so you can carry stuff and keep your bum dry. The eagle-eyed among you will notice there are no mudguard eyes on the dropouts of our bike. That's glitch with our early sample, and Foffa assures us they are present on production bikes. The Foffa-branded saddle is a perfectly acceptable place to park your bum, and the ergonomic grips covered in faux-leather are comfortably shaped and padded. Whack into a pothole and your hands don't get too badly jarred, which is nice. 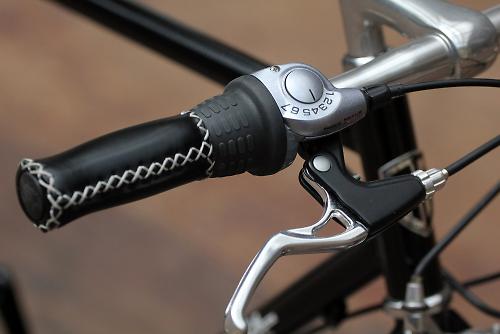 By the way, the brake levers shown above are not final spec. We complained that they gave the Urban's braking a hard feel because they are intended for V-brakes not calipers, and to our relief Foffa told us he's already realised that and changed them for levers with higher mechanical advantage.

5 Fixing a puncture is a pain 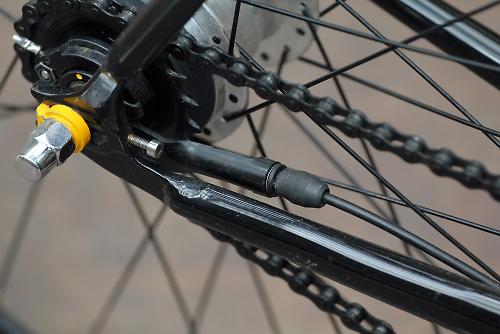 One situation where the hub gear falls down is when you get a rear puncture. The rear-opening dropouts and gear cable attached directly to the hub make the process of getting the wheel out fiddly. Taking your time in a nice warm workshop, it's not a bother, but if you were sitting in a rainy East London gutter at 8pm in December, you'd be grateful the DLR takes bikes now.

Fortunately the Foffa comes with puncture-resistant Kenda tyres. My only flat during the test period occurred because I rode up a kerb with all the elegance of a three-legged hippo on bad acid, and pinch-flatted. Don't ride like a sack of spanners and you should be fine. 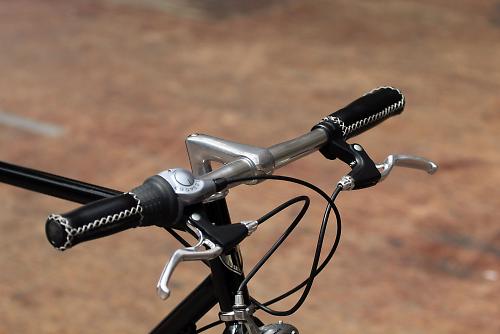 The Urban's fairly short stem had me wishing for a bit more room. I wanted to be able to lean into the bike a bit more. It's fine if you like a very upright riding position, but even on flat-bar bikes I like to stretch out. Which brings me to...

7 We stopped using quill stems for a reason 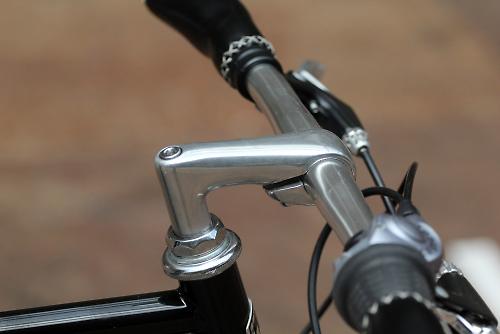 If you want to change the riding position of the Foffa substantially, you're going to have to swap out the single-bolt quill stem. Aheadset-type stems are now so dominant that quills are not easy to find in a range of lengths, and inexpensive ones over 100mm don't seem to exist at all.

They also force you to use a fiddly-to-adjust threaded headset and they benefit from being loosened and regreased periodically to stop them seizing in the steerer, whereas Aheadset stems just need a couple of Allen keys to adjust. Quills may be hip and retro, but there's no practical excuse for them in this day and age. 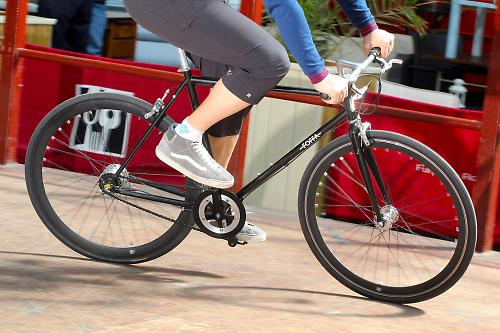 The best thing about the Foffa Urban is its grab-and-ride appeal. Wheel it out on the street and you're away, with no need for fancy shoes, Lycra or any of the other paraphernalia we convince ourselves we need. Sling a lock in a shoulder bag and you're set, and because the wheels are bolt-on you don't even need to faff about half-dismantling the bike to park it.

The Foffa Urban has a carefree charm that's a refreshing change from the complexity and paranoia-inducing cost of more 'serious' drop-bar urban bikes. This is a bike for street clothes, for riding to the office, the shops or coffee bar, and for pootling to a nice riverside gastropub for Sunday lunch. If you don't have something like it in your fleet, you're missing out.

and a fairly compact geometry for additional comfort and responsiveness

bottle cage bosses to make it a fully functional machine.

and a Revo Shifter for low effort rotational twist shifting and comfortable handling.

- OTHER FEATURES - a Lasco 46T alloy crankset with chain guard, a city saddle

ergo grips for extra comfort and a quill stem for extra adjustability and a classic look.

The 'Urban' has been designed to be the ultimate multi-purpose geared bicycle,

perfect for leisurely rides as well as fast and long commutes around the city.

I can't argue with that.

Well-executed, if a shade on the heavy side, but you don't get a featherweight frame in a £500 bike.

Love the lack of fuss of a hub gear. Everyone should have a hubbie in their stable.

Would you consider buying the bike? Yes, or something along similar lines.

While the stem/headset combination marks the Urban down a bit, I could live with them. They don't detract from this being a fun round-town runabout with some terrific practical touches. 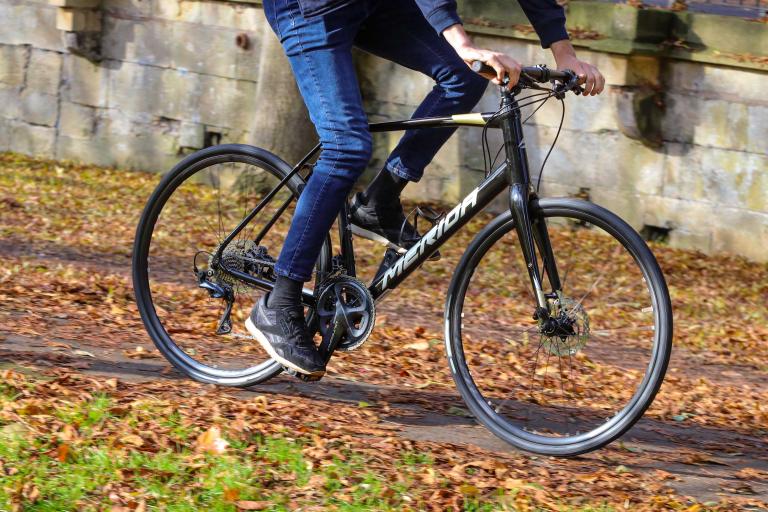 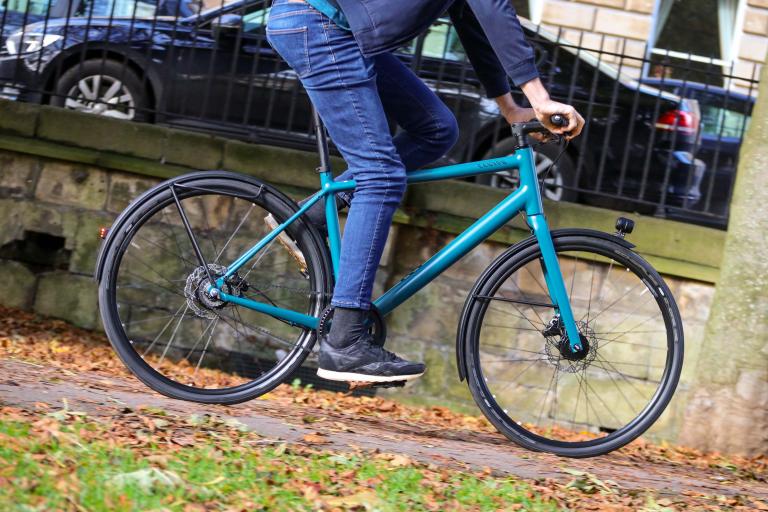 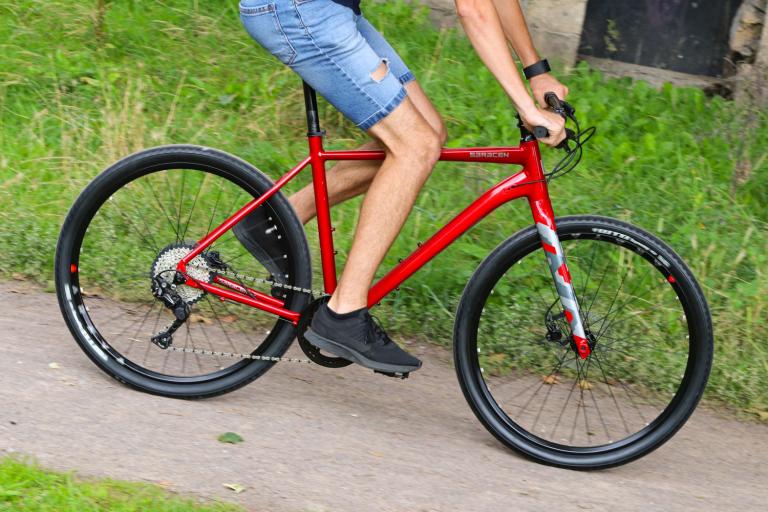 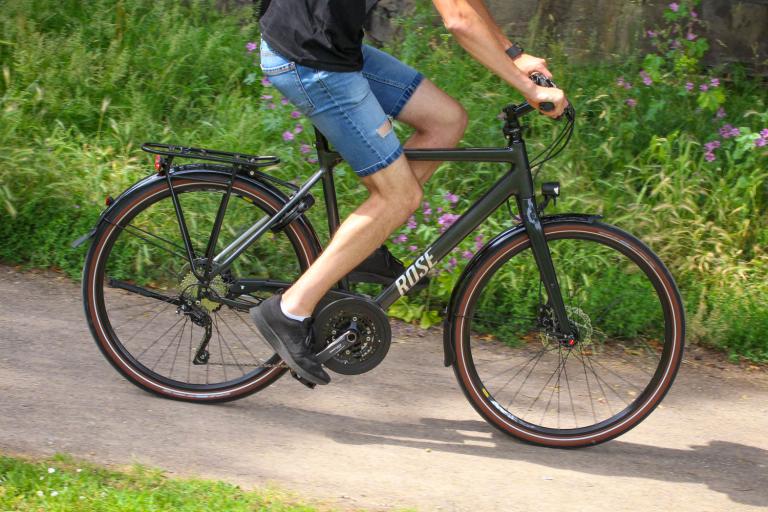 A fairly heavy and uninspiring bike that at least comes loaded with plenty of kit. One for flat rides only!