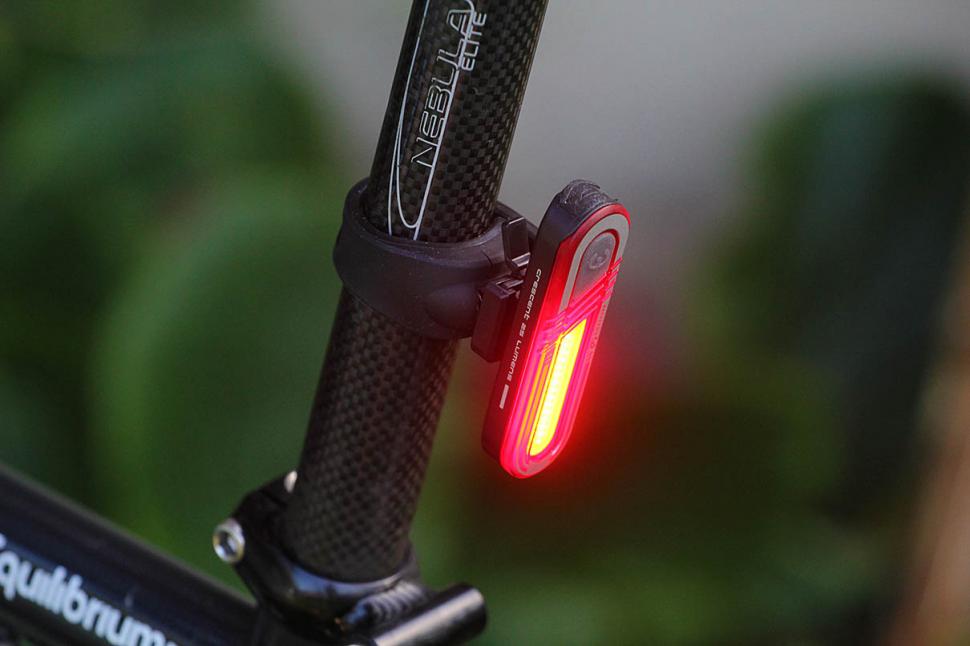 7
10
Good light but you'll need a disciplined charging regime to get the best from it
Weight:
19g
Contact:
www.raleigh.co.uk

A stylish wee light from Moon, the Crescent packs a decent punch but the modest runtime limits its appeal.

Remember the huge D cell monstrosities that weighed down our bikes when we were kids? Be grateful if you're young enough not to, for they were dark times, often literally; the wretched things were about as reliable as a marzipan pickaxe. If you want proof of how far we've come since the LED revolution started, just check out the Moon Crescent.

The Crescent is a tiny package wrapping a strip of 15 LEDs in a translucent red casing. It's so small you'd be forgiven for wondering where the battery is and a quick glance at the run times confirms that the battery is indeed, very small. Of course being small, light and powerful (25 lumens) puts it in prime MAMIL-bait territory. That isn't to say that it's a case of style over substance, but with a maximum run time of six hours (and a mere 1:30 if you want all 25 lumens on steady) it's not a light that lends itself to regular commutes or long night rides.

The six modes are accessed by either a single press or a double click on the button. The button sits flush with the face, so leaving the light bouncing round in a bag pretty much guarantees it will switch itself on at some point, which is an annoying habit if you tend to remove your lights when parked.

There are three steady modes and three flashing, including a disco-twitch strobe that we're not entirely convinced about. The lowest flash setting gives you more than enough visibility (and the longest run time) and that was the one I used pretty much all the time. Yes, the light does boast 25 lumens but using them all gives such a short runtime that it's just not practical.

The robust rubber strap works well although it's rather over-engineered given the tiny size of the light. You can adjust the angle of the bracket through a number of preset clicks although it's stiff enough that you might be forgiven for thinking that it was fixed.

Charging is via the USB port, concealed under a hefty and well fitted rubber plug. Like it's big sister, the Moon Shield, the Crescent has a low battery indicator. I've been using that light for a year now and I've never actually seen it, which suggests that it's not particularly effective.

The ultra convenient rubber bracket means that this will probably find itself being pressed into regular service across my fleet, I just need to make sure I keep it properly charged.

A good light but you'll need a disciplined charging regime to get the best from it.

Switch is a bit fiddly to operate with gloves on and is too easily activated in a pocket or bag.

The best it'll do is 6 hours, which isn't great for a rear light.

Weighs almost nothing, but the penalty is the modest runtime.

Tricky - it's a good light, but the modest runtime means it's not great for regular commuters.

Would you recommend the light to a friend? Only if their commute was short.

Stylish light for extending your ride beyond sundown.