Weekday cycling in London is up 10 per cent compared to pre-lockdown levels, according to new research – but the biggest growth in people riding bikes has come during weekends. Meanwhile, car use is back to the levels seen before the coronavirus pandemic struck.

The figures come from analysis of Transport for London (TfL) data in the latest edition of The London Intelligence quarterly report from the think tank Centre for London, in partnership with the Policy Institute and the Centre for Urban Science and Progress at King’s College London.

“London’s cycling levels have surged above pre-crisis levels, and even tripled on some weekends – a greater growth than driving rates, albeit from a smaller base,” the report revealed. 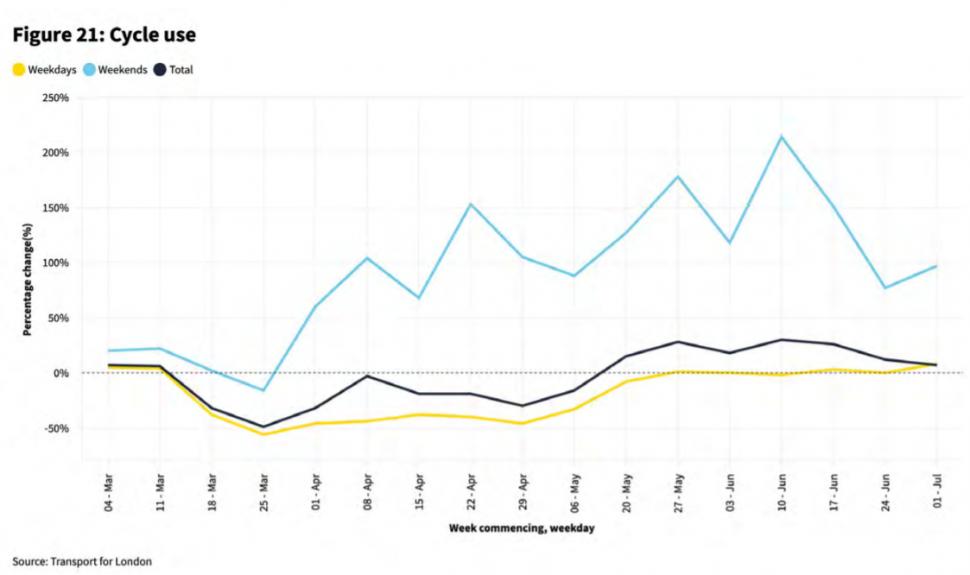 “While weekend cycling has skyrocketed, weekday cycling saw a period of decline at the start of the pandemic but has since increased by 10 per cent.”

In part, that reflects changing travel patterns, with far fewer people commuting to workplaces in the city centre especially, whichever the mode of transport – so, including those cycling the entire journey, as well as those who reach the city by train from further afield, then complete their trip by bike.

The fact that cycling levels are up on weekdays despite the absence of many of those who would have travelled to work pre-lockdown suggests two things to us, in line with previous stories we have reported on – first, that many people and key workers especially have started commuting by bike for the first time, and secondly that more Londoners are using bikes for everyday journeys, for example to go to lcoal shops.

As for the increased duration of cycle hire trips, we suspect there are a couple of factors at work here, one being that many people who do have to travel to work are using the Santander Cycles scheme instead of travelling on public transport.

Perhaps more significantly, and tying in with the spikes in cycling seen at weekends, is the fact that while in previous years much of the leisure use of the hire bikes in spring and early summer has been by tourists.

But this year, particularly in the first couple of months of lockdown, it has been very noticeable, that they have been replaced by groups of younger Londoners, often from ethnic minorities, and who took advantage of quieter streets and good weather to cycle round the city and its parks at weekends, thus increasing the average trip length.

According to the report, cycling “is one area where the priorities of City Hall, London’s boroughs and government are aligned; there is therefore an opportunity for this shift to continue.”

The report said, however, that “Mirroring changes in other global cities, private car use across London has edged back to familiar levels, risking a return to poor air quality and increased congestion across the road network. “According to Transport for London’s traffic cameras, private car traffic is five per cent below pre-crisis levels.

“As e-commerce demand remains high and businesses begin to reopen, large good vehicle (LGVs) traffic increased to eight per cent below pre-crisis levels. In contrast, use of private hire vehicles (PHVs) remains low, at 43 per cent below.”

The report also highlighted the different impact of lockdown measures on consumer spending – and by implication, travel patterns – in the city centre and the town centres elsewhere in the capital.

“Within London, continued remote working has generated an uneven economic recovery,” it said.

“Insights from Mastercard’s Recovery Insights initiative on retail sales in a sample of London’s town centres shows that central London saw the steepest fall in the aggregate number of transactions across all categories during the first wave of the pandemic and the slowest recovery since the reopening of stores.

“In what is usually a peak season for central London’s economy, transaction volume for grocery and apparel shops in mid-July were down by 60 per cent compared to January 2020, and 80 per cent for restaurants.

“This is in stark contrast with smaller town centres (defined as those with relatively fewer transactions before the pandemic) such as Southall or East Ham.

“There, grocery spending remained at its usual level throughout the pandemic, while apparel and eating out transactions had already returned to or surpassed their pre-crisis level by July.”

The report continued: “In larger town centres such as Stratford, Ealing, Bromley and Orpington, the picture is more mixed with number of transactions running at about a third lower in July than in January 2020.

“The pandemic is clearly leading to a protracted economic crisis in central London, as shoppers and diners stay closer to home, shifting their shopping to their local town centres, and to some extent, larger ‘suburban’ centres.

“Though it has one of the fastest growing populations in the city, central London still has a relatively low residential density, meaning there are fewer residents to sustain services and businesses when visitor and commuter numbers are down.

Approximately 330,000 people live in central London, but pre-crisis, this figure would swell by as much as 80 per cent each day, as commuters, tourists and other visitors flocked to the centre,” the report added.