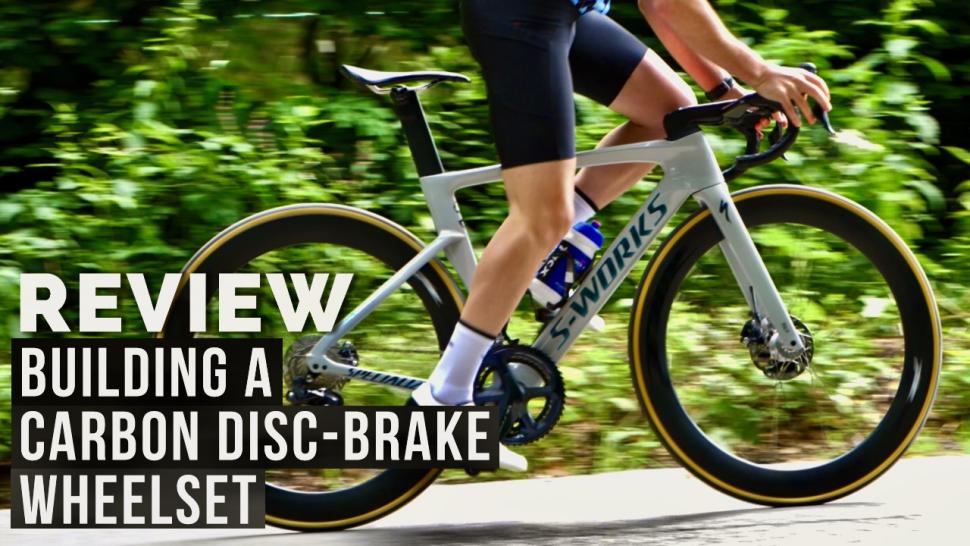 Video: Building your own carbon wheelset pt 2: Riding them

Find out how Liam's wheels held up when he took them for a spin...
by Liam Cahill

I set out to find out how difficult it would be to build a deep-section carbon disc-brake road wheelset. Before we jump into my first ride review, make sure you head over to watch part 1, where I actually build the wheels. Plenty of mistakes were made and I had cut my own hair at the start of lockdown.

As it turns out, building a deep-section carbon wheel is quite tricky. There are numerous traps to fall into and I found myself in most of them, including using spokes that were a bit short, putting them in the wrong spoke holes and generally spending too much of a weekend trying to true them.

For this build I used:

Both front and rear leading and trailing spokes have been positioned correctly, the front being symmetrical and rear asymmetrical to best distribute drive and braking forces.

2x pattern is the correct choice for this spoke count.

Spokes in both wheels are approximately 2mm too short, and it’s possible that a couple of spokes within each wheel may have been mixed up as they appear shorter than the rest. spoke thread can still be seen above the top of the nipple. This is a common point of failure, as the spoke is being stressed at the thread where it is more likely to snap.  We may be able to account for this by using longer nipples, which would allow you to keep your existing spokes whilst achieving better thread engagement. When measuring spokes I would generally advise rounding up rather than down, as it’s preferable to have 1mm more spoke than you need rather than 1mm too short. Especially with a deep rim where there is no potential for the excess spoke to pierce rim tape or be unsightly.

Both the front and rear wheel have been laced with spokes crossing the valve hole. This doesn't have an effect on the ride quality, but can make it a little more awkward to get the head of your pump onto the valve, and isn't best practice.

Both wheels are within a reasonable margin of accuracy for hop and run out. The front is within 0.5mm of hop, but does have a lateral run out of almost 1mm.  The rear is the opposite and has a slightly larger hop but excellent lateral runout (<0.5mm)  Whilst these aren't up to the standards you would expect from a professionally built wheel, they aren’t bad for a first attempt, and would take minor adjustment to improve upon.

The rear wheel is dished within 0.25mm which is excellent, unfortunately, the front is 3mm out of dish, which is significant enough that it would be noticeably off centre within the fork blades. If you were relying on your truing stand to be centred they can often move unevenly, so may, for example, be centred with a 142mm hub, but off centre when the 100mm hub is in place. This is why a dishing tool is recommended to check this measurement throughout the build.

Achieving good evenness of tension is to an extent dependent on the accuracy of the gauge with which you are measuring it, and the tool I am using to assess your wheels is likely to be significantly more accurate than that which you were using.  With that in mind, you’ve done a very good job of making sure the tension is even. The balance of tension could be improved upon, and the overall tension is quite low (90Kgf on drive rear/disc front, could be up to 120Kgf) this may have dropped slightly since you built the wheels if you have ridden them and didn't thoroughly stress relieve them during the build process?

Overall I would say that you’ve done a good job of your first attempt at wheel building, given the fact that I didn’t give you many tips to begin with. Spoke length calculations can be tricky, and knowing whether they are correct after lacing but before carrying on with the build is something learned through trial and error.

The finished wheelset will be functional and ridable but you could suffer from spoke breakages in the long term due to the lengths not being ideal. As with most things, wheel building gets significantly easier with practice and experience, and I’m sure if you were to start again with what you’ve learned in mind you would do a great job!