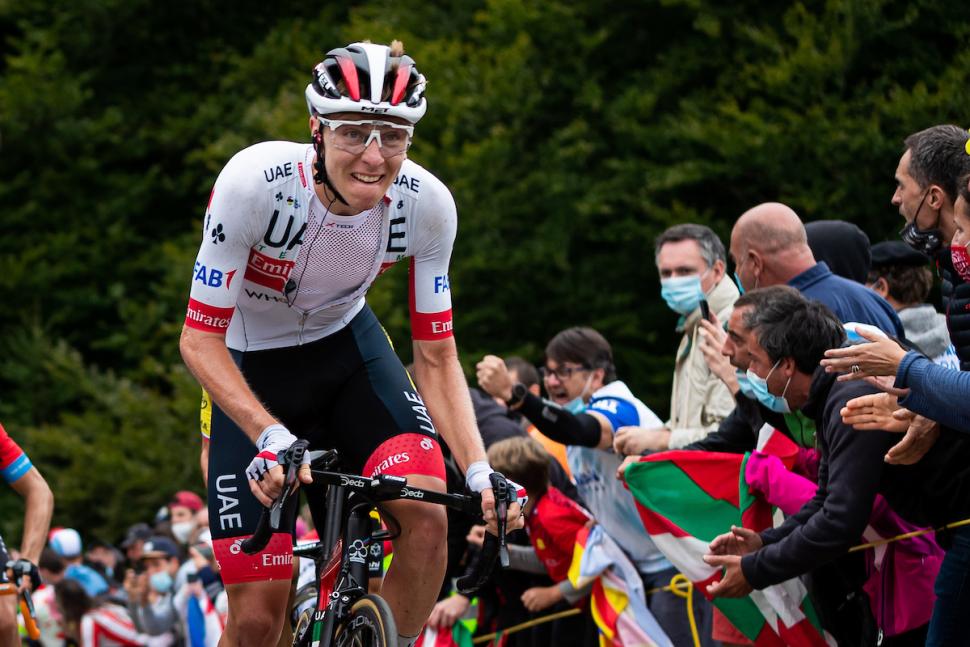 Primoz Roglic of Jumbo-Visma has taken the overall lead of the Tour de France this afternoon, but was pipped to the Stage 9 win in Laruns by his friend and rival Tadej Pogacar of UAE Team Emirates on a day that will go down in Slovenian sporting history.

Pogacar, who turns 22 later this month and was third overall at last year's Vuelta a Espana, won by Roglic, becomes the youngest stage winner at the Tour de France this century following his victory in the 153km stage from Pau to Laurens.

Adam Yates of Mitchelton-Scott, who began the day in the yellow jersey of race leader, lost around a minute to his rivals and slips to 8th overall, one place behind Pogacar whose 10 bonus seconds today have cut his deficit on the race lead to 44 seconds.

Defending champion Egan Bernal of Ineos Grenadiers moves into second place overall, 21 seconds behind Roglic ahead of tomorrow's rest day, with Cofidis rider Guillaume Martin a further 7 seconds back in third place on the general classification.

Nearly 50km had been ridden by the time a break got away, and from the escape group it was Marc Hirschi of Team Sunweb who attacked and went clear, the Swiss rider seemingly heading towards a stage win before blowing up on the Col de la Marie Blanque.

He would finish third on the stage behind the two Slovenians, with Bernal and Bahrain McLaren’s Mikel Landa also crossing for the same time to complete the top five on the stage.

It is incredible to have won at the end of such a hectic day. Firstly I thank the team for the excellent work done throughout the stage.

I am very happy, in the final my goal was to recover as many seconds as possible in the general classification, also aiming for bonuses, but the concentration was then turned to the sprint: I don’t remember exactly how I won the sprint, I just thought about pushing as hard as possible.

I arrive on the first rest day with a stage win, which is added to the one obtained in the first stage by my teammate Kristoff. I am happy with what we have done so far in this Tour, with only one off-day on the 7th stage

It was a fast and difficult stage. Everyone was extremely motivated to go for the yellow jersey. The guys did a great job all day long. It is a beautiful jersey to have. I feel very happy.

Everyone dreams of having it in their hands. It also means appreciation to the whole team.

We must continue to do our best. Hopefully I still have the jersey around my shoulders in Paris. After this tough stage we have deserved a rest day

1
Win a Saris H3 Direct Drive Smart Trainer worth £850!
2
Cyclist's death 'could have been avoided' – completion of half-built cycle path pushed back to 2027
3
Concerns mount after latest wave of attacks on Bristol and Bath Railway Path
4
MP who opposed pop-up cycle lanes tries an e-bike – and has an epiphany (of sorts)
5
Here's what we want to see from the new Shimano Dura-Ace groupset
6
“He who shouts loudest is no way to operate”: public overestimates bike lane opposition by 50% finds new Cycling UK research
7
Near Miss of the Day 501 (UPDATED): HGV driver said he had to cut corner because of fast oncoming traffic
8
Government cycle lane micro-management is "supreme bollocks" according to Reading transport boss