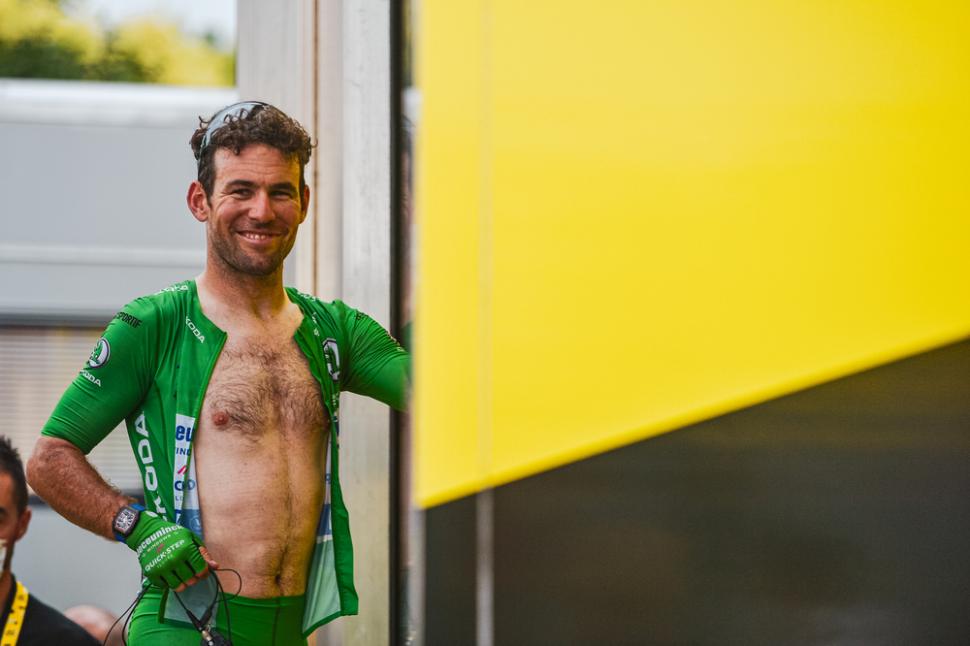 Mark Cavendish has won his third stage of the 2021 Tour de France to move within one of Eddy Merckx's record of 34 victories after his Deceuninck-Quick Step team forced the pace in the final 30km as the peloton split in crosswinds then gave him an expert lead-out as he crossed the line, arms raised in triumph, in Valence.

With the wind blowing towards the end of the 190.7km stage from Albertville, and several changes of direction on the route, it was a nervous peloton that headed into the final 40km or so with teams fighting for position ahead of exposed roads in the Loire Valley.

With 30km remaining, world champion Julian Alaphilippe of Deceuninck-Quick Step put the hammer down approaching a roundabout, stringing out the peloton as the pace quickened.

Moments later, Bahrain-Merida’s Sonny Colbrelli punctured, the Italian national champion swapping bikes as soon as his team car arrived, but he had to make a huge effort to get back on due to the speed the front of the group was travelling at, likely sapping his energy before the finale.

The peloton split into three big groups, Cavendish and his team-mates prominent near the front of the first of those, which also contained race leader and defending champion Tadej Pogacar of UAE Team Emirates.

The race had largely come back together by the finish – the first 76 riders across the line taking the same time as Cavendish, whose team provided a masterclass in how to lead a rider out as they guided him through the final 5km and set him up to sprint for victory, with Jumbo-Visma’s Wout Van Aert second and Jasper Philipsen of Alpecin-Fenix third.

Earlier in the stage, Cavendish had decided not to contest the points remaining at the intermediate sprint, which came at the top of a long uphill drag, after the two members of the day’s break had gone through.

It was his two closest rivals in the points competition who fought it out instead, Colbrelli prevailing over BikeExchange’s Michael Matthews.

Cavendish – who said in a post-race interview that stage wins are his priority, with the green jersey a secondary consideration – now has 218 points, with Matthews, fifth today, on 159 and Colbrelli, who finished 17th, on 136.

Four sprint stages remain in this year’s race, and you would be hard pushed to find anyone who would bet against Cavendish equalling or even surpassing Merckx’s record, which includes 20 time trial stages.

After tomorrow’s unprecedented double ascent of Mont Ventoux, the first of those comes in Nimes on Thursday, with the Roman city being the third in this year’s race where Cavendish has previously won a Tour de France stage.

And in the two that the race visited last week, Fougeres and Chateauroux, the 36 year old was first across the line.

Three stages that should end in sprint finishes remain after that – the last, of course, on the closing day in Paris, where Cavendish won in four successive editions, the last of those in 2012 when, in the rainbow jersey, he was led out by yellow jersey Bradley Wiggins.

One thing’s for sure. One more stage victory and even Cavendish, who has evaded the subject to date, won’t be able to ignore the Merckx record any more.

I remember buying cycling magazines when I was younger and you could find there articles on the art of sprinting stuff and how a lead-out works, and this was what we had today.

We just got the boys on the front and they pulled as fast as they could so no one could come up and try to come past in the finish.

We knew the final kilometres and were confident we had the team for the sprint. I was kept fresh throughout the entire day by the guys, who worked non-stop for me, showed an incredible commitment and made sure I was where I needed to be.

All these things make me super proud to be part of this team.

I’m so humbled by my teammates’ sublime effort and the lead-out train they provided to me.

The winner of Flanders, the World Champion, who has also worn the yellow jersey here, the Omloop Het Nieuwsblad winner and Michael, who’s the World Madison Champion and is going to the Olympic Games to try to win there – they all left everything on the road for me.

I just had to finish it off today. I didn’t really do anything, it was the team I have to thank for everything.