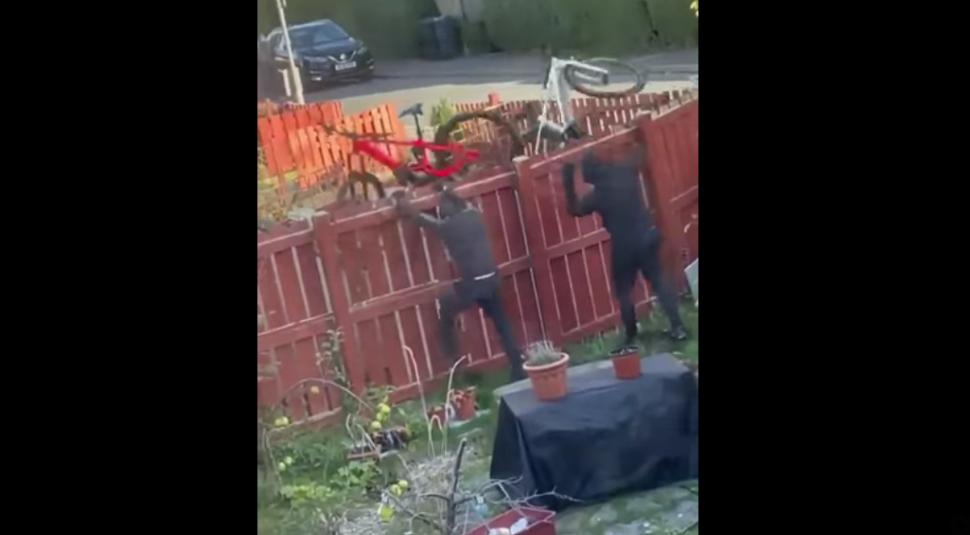 The Inch bike theft via Facebook.PNG

Thieves ​in Edinburgh have been filmed making their getaway with two bicycles after they broke into an alarmed bike store at a house in The Inch district of the Scottish capital.

The footage of the theft, which took place last Thursday 11 November at around noon, was posted to Facebook by Edison Mallare, who said that it had left him “shaken and very angry because they even threaten my family.”

Photographs also posted to Facebook show that the thieves prised open the top of the bike storage unit before cutting through a cable lock securing the bikes in what appears to be a well-planned operation.

In the video, the pair of miscreants – both dressed in black and wearing hoods and masks – can be seen tossing the bikes over the garden fence, where at least one accomplice is waiting, before vaulting it themselves.

Edison, who was at work at the Royal Infirmary of Edinburgh at the time, told road.cc: “My son filmed this while my daughter was calling the police.

“My wife ran downstairs and locked the back door as the third guy in the grey tracksuit was approaching our back door with a piece of log threatening to hit whoever came out to stop them.”

The footage shows the family’s next-door neighbour rushing out and climbing on top of the fence before stopping, presumably because the thieves have already made their getaway.

However, in a reply to a comment on Facebook, Edison said that another neighbour had recovered one of the bikes, adding, “Still good people out there.”

That bike belongs to his wife, and Edison told road.cc that he believed the thieves had left it in an alleyway because during the theft the rear mudguard was dented, causing the wheel to seize, meaning they could not ride it away.

He added that “the alarm went off and the bikes were double locked with cables,” but they “ did not stand a chance against bolt cutters,” and that the “Asgard bike storage was not secured against the cutter as they cut the shroud cover for the padlocks.”

The bike the thieves did get away with is a red Orbea Wild FS. 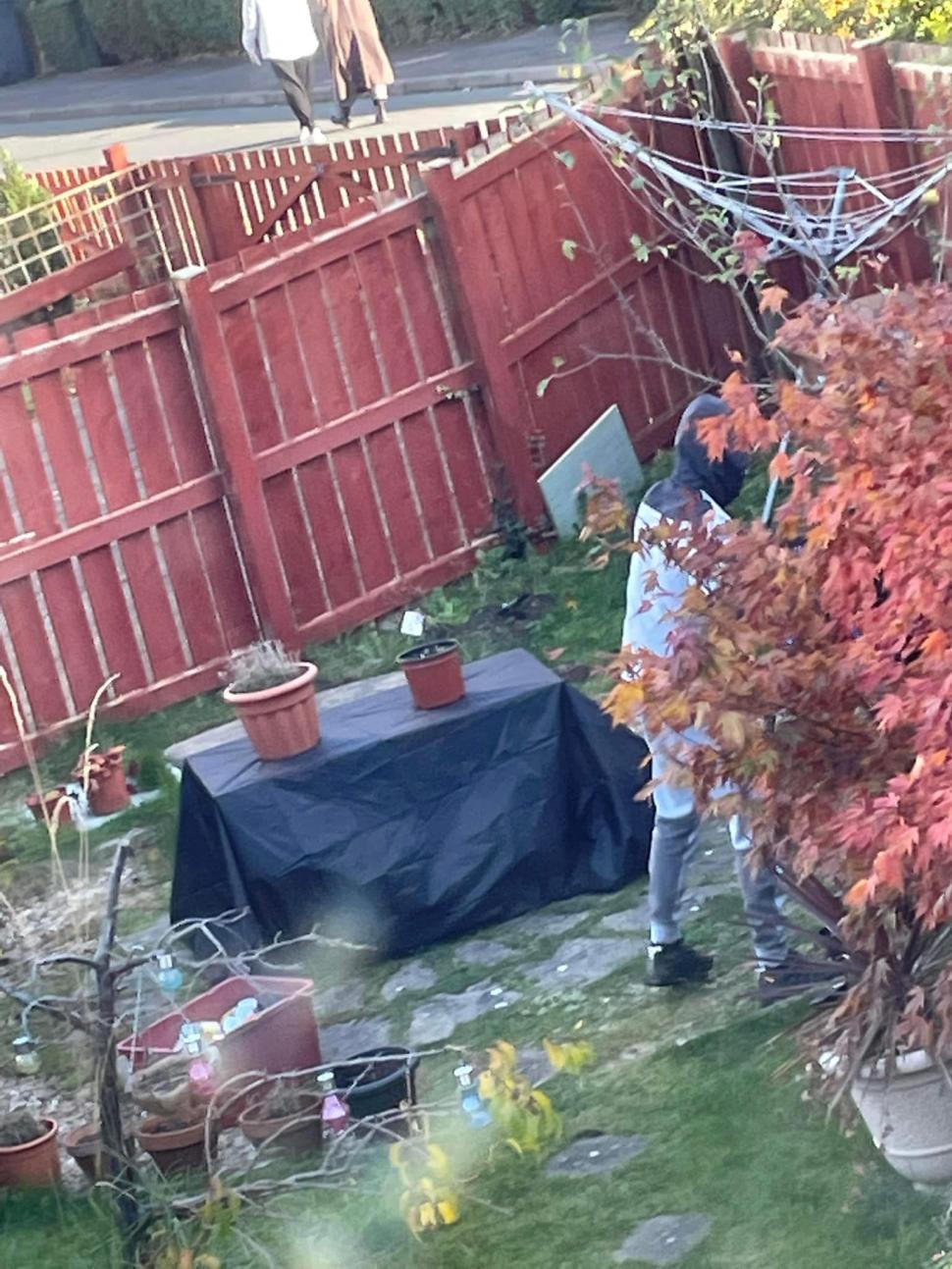 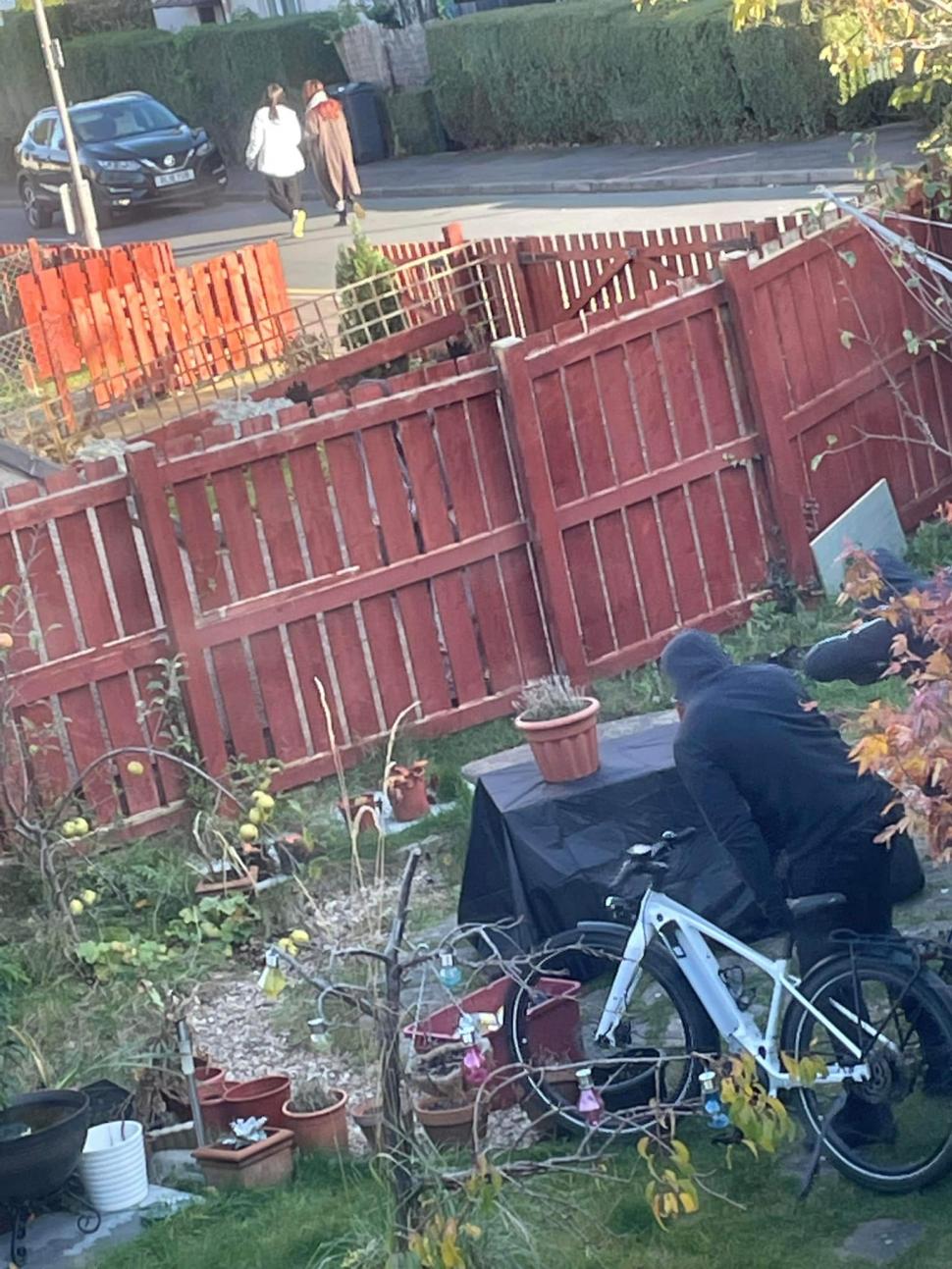 It is the latest in a series of robberies and thefts of bicycles across the UK that we have reported on in recent weeks, many taking place in broad daylight and in the presence of witnesses.

Last month, the Metropolitan Police arrested a youth following a string of bikejackings by thieves on mopeds in London’s Richmond Park, with the victims in some cases threatened with machetes.

In Birmingham, West Midlands Police have stepped up patrols on the city’s waterways after a number of incidents in which cyclists have been mugged for their bikes while riding along canal towpaths.

And earlier this month in Surrey Quays, south London, thieves used an angle grinder to cut through a lock to steal an e-bike outside the busy shopping centre, with footage taken by a bystander passed to the bike’s owner and police in a bid to track down the gang.

1
Police officer caught on camera telling cyclists to ride in single file to be given "education around traffic offences"
2
Footage of cyclist's encounter with mountain goat "on steroids" goes viral
3
Driver "used bus as a weapon" against cyclist, loses appeal over sacking
4
Popular club cyclist hit and killed during time trial, van driver arrested
5
"I've killed one of you guys before": close pass driver who left cyclist fearing for his life gets police caution
6
“If I assaulted children, I’d be locked up”: Father of teenage girls involved in Mathieu van der Poel hotel incident slams Dutch star’s fine
7
Twin brothers accused of murdering charity cyclist after hitting him with car while drunk
8
Mark Beaumont's North Coast 500 record-breaking bike and equipment