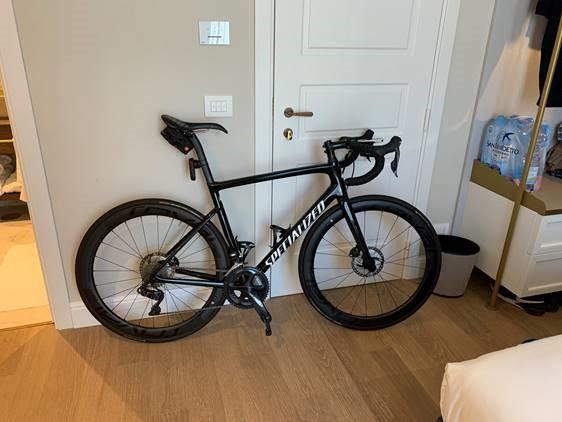 Richmond Park cyclist spends a penny ... and has £6,000 bike stolen

Police urge riders to lock their bikes, with thieves targeting owners of high-end bikes at Roehampton Gate
by Simon_MacMichael

A cyclist in Richmond Park who left their £6,000 bike unattended to spend a penny got a costly shock when they emerged from the toilet to find that thieves had made off with it – the latest in a string of similar thefts at the same location.

The theft of the black Specialized bike happened at around 8.20am at the toilets close to the Colicci Café near Roehampton Gate.

Royal Parks Police said that the theft highlights the need to lock bikes up, even if only leaving them for a few moments, as well as the importance of registering the bike’s details. In a tweet, they said: “A black Specialized bike worth £6k was stolen outside #Roehampton Cafe toilets this morning at 08:20 whilst the rider went inside, leaving it unlocked. Please lock your bikes, even if you’re just popping inside.

“Now would be a good time to remind cyclists that it’s always good practice to register with @bikeregister or @ImmobiliseCrime including adding micro dots/data tags to your bikes so we can identify them if recovered,” they continued.

A spate of thefts at the same location in recent months suggests that thieves are targeting bikes that have been left temporarily unattended – and the popularity of the park with road cyclists means that often, they are making off with high-end machines, for example in August, a Pinarello bike was stolen when its owner went to the toilet with his son, with whom he had been riding in the park.

BIKE THEFT: On Sunday morning, a dad who had been riding in #RichmondPark with his son went into the toilet near the Roehampton Gate cafe to help his lad. When he came out 2mins later, his bike had gone. He has told the police. Let us know if you spot this black Pinarello, pals! pic.twitter.com/ssIFoTLnrY

And because the bikes have been left unattended, insurers will almost certainly reject any claim – as they would even if the bike were locked but not to an immoveable object such as a bike rack, which are available in Richmond Park, and with a lock complying with any requirements stipulated in the policy.

In its February 2020 bulletin Richmond Park Cyclists, which represents riders who use the park, reported that in November last year two bikes were stolen from outside the toilets, another from near the café, and more than a dozen from the cycle hire shop there.

Police did catch two thieves red-handed though, with Richmond Park Cyclists saying: “The pair tried to offload the two bikes to a third person but failed and rode off towards the centre of the park where they were apprehended. Caught red-handed - lovely work, officers, and thank you for your efforts!”

The group added: “Once again, if you see anything suspicious, call 101 and ask for the Royal Parks Command unit, or call 999 if it is an emergency. We recommend that you carry a small portable lock so your pride and joy isn’t targeted, and if you don’t have one, remember that Colicci will loan you one for a cash deposit of £5.”

Of course, that advice came before coronavirus restrictions came into effect and it is unclear whether loan locks are currently available, so if you're not riding with someone who can look after your bike for you, it's best to take your own lock.