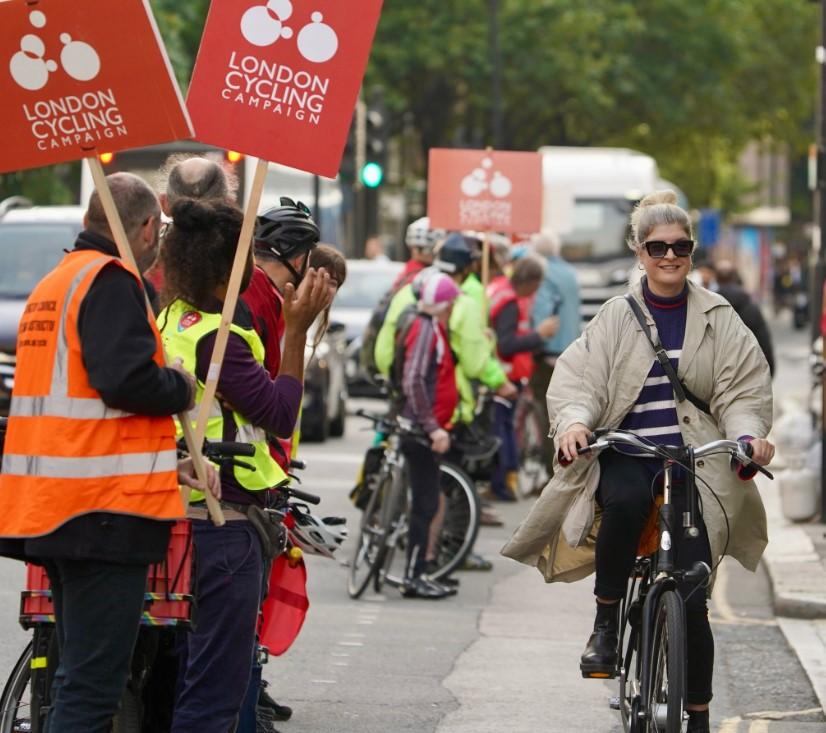 Three years on from previous protest, campaigners are still waiting for safe infrastructure on busy Clerkenwell corridior
by Simon_MacMichael

Cyclists in London have marked today’s World Car-Free Day by making a people-protected bike lane on a key commuting route across the city where safe infrastructure promised several years ago has still not materialised, despite several cyclists being killed and a number of others sustaining life-changing injuries there in recent years.

They had previously undertaken a similar intervention at the same location in 2019 after three cyclists lost limbs after being crushed by lorries in the area.

Old Street lies on the axis running from Shoreditch via Clerkenwell towards Bloomsbury – the location of the notorious Holborn Gyratory – and on towards the West End and is a hugely popular cycle commuting route.

However, efforts to have safe infrastructure put in place have so far proved fruitless, with the campaign groups condemning what they see as “eight years of inaction” to improve the safety of cyclists along the so-called Clerkenwell corridor, reports the London Evening Standard.

Citing data from CycleStreets, the newspaper says that since 2016, some 201 cyclists have been injured in road traffic collisions on the route, including 30 who were seriously injured.

Within the past 12 months or so, two cyclists have been killed in crashes involving lorries on the Holborn Gyratory, with paediatrician Dr Marta Krawiec losing her life in August 2021, and lawyer Shatha Ali killed there in March this year.

Among those present at this morning’s protest were Victoria Lebrec, who had to have a leg amputated when she was run over by a lorry eight years ago, as well as Green Party London Assembly Members Sian Berry and Caroline Russell – plus celebrity cycling cat Sigrid and her owner, Travis.

Steve Prowse of Camden Cycling Campaign said: “We held a protest here in 2019 and we were promised action. Since then, more people have been hurt.

“We’re fed up with waiting for action on this corridor – one of the busiest for cycling in London despite the dangers here and despite the lack of any safe cycle infrastructure.

“We’ve been promised action by Camden and Islington councils. How many more people must be injured or killed before it arrives?”

Construction was due to start in January 2021 and to be completed by the end of that year, but most likely due to the coronavirus pandemic, the plans appear to have been put on hold.

A spokesperson for Islington council said today: “The council is currently working, alongside TfL and Camden council on proposals to introduce segregated cycle lanes on the corridor, to make cycling easier and safer while protecting bus journey times.

“Given the corridor’s status as one of London’s most heavily-used cycle and bus corridors, devising these ambitious proposals is likely to be challenging, complex, and time-consuming, involving the re-designing of several key junctions.”

A consultation into the proposals put forward by Camden and Islington councils is due to be held next year.