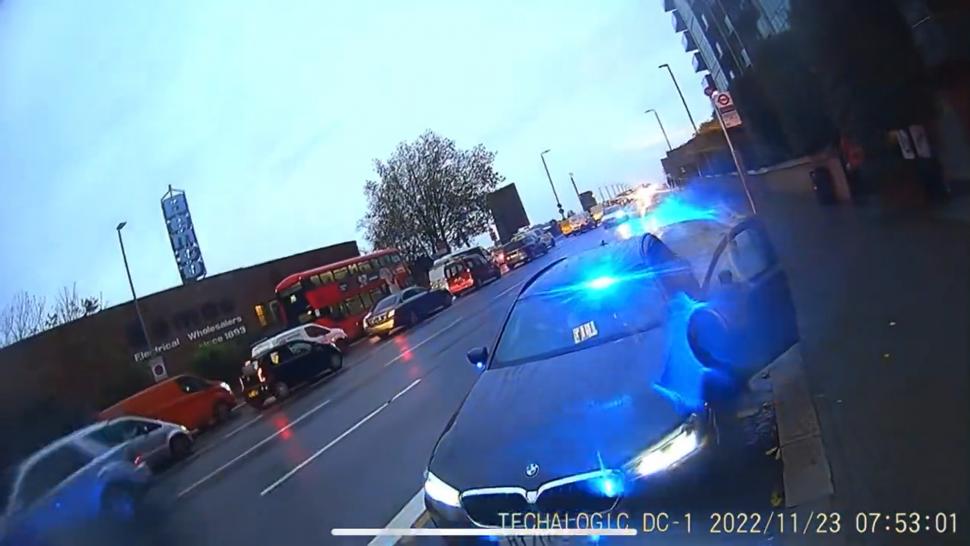 Met Police confront cyclist for swearing at them (video @BeebsG/Twitter)

Video shows the moment officers confronted a cyclist who told them to "get out the f****** way"...
by Dan Alexander

A senior Metropolitan Police inspector admitted officers were "clearly wrong" when confronting a cyclist who swore at them for blocking a London bus lane with their parked unmarked vehicle.

The footage which has been widely shared on social media shows two officers approach the rider, who is travelling with two young children, after he told the police to "get out the f****** way".

As the cyclist laughs at the fact he did not realise it was a police vehicle the blue lights come on before one of the officers proceeds to scold the cyclist for apparently "committing public order offences" and swearing in front of his children.

The officer driving adds: "It's not all about you", returning to the vehicle while the main officer involved warns that "the wrong type of people" might "ram" or "stab" the cyclist if they were on the receiving end of the shout.

"You're swearing in the street with two small children that are yours, so you're committing public order offences with your kids," the main officer says. "How inconsiderate and stupid can you be? You want to put your kids lives at risk? There are people out there that if you swear at them, would come after you.

"Also swearing in the street is against the law, you just did it. It's a public order offence, in a public place where there's small children, you cannot swear.

In the second part of the video the officer questioned whether a cyclist would have priority moving into another lane to pass a parked car.

"Sorry, I don't like it when the rules are misinterpreted," the cyclist replies. "I believe I have a right to pull out, indicate in front of another car. Anyway, it happened, I moved out and came past you.

"The only reason I had to do that manoeuvre is because you're in the way. I was upset, I swore at you and do you know what? I'd probably do it again and hope I wasn't going to get some arsehole from Wandsworth beat me up.

"Swearing in front of my children is my choice. Now you guys do a great job but please enforce the law on the correct rules."

Following more than 250,000 thousand views and comments from many — including Jeremy Vine who called the officer's argument "extraordinary" — inspector Tony Adkins of the Metropolitan Police's Roads and Transport unit admitted the officer's lecture was "clearly wrong".

Thanks for alerting us to this. Inspector Tony Adkins has viewed this video - please see the comment below. pic.twitter.com/5Ocqz6igRB

Vine said the policing looked like a "Comic Relief sketch" and "he [the officer] realised his assertion that the cyclist had committed a crime was wrong, so he changed it to an argument about possibly endangering himself by accidentally swearing at a criminal."