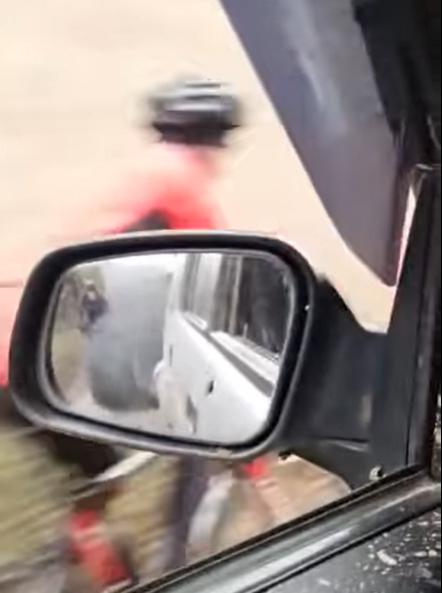 A motorist who was filmed deliberately blowing black smoke at two cyclists from the modified exhaust of his 4x4 has been described as “immature” and “a plonker”.

A lorry driver from Somerset posted the expletive-laden video on Facebook under the caption “Do you reckon she passes the emissions test?”

The footage shows two men in a muddied vehicle as they approach two cyclists on a narrow country road. The passenger tells the driver: “go on, do ‘em. Smoke the c**ts”. The driver then blows a huge cloud of black exhaust smoke at the cyclists as he overtakes them, while one of the men in the vehicle laughs, “get smoked boys”.

The process, which is known as ‘rolling coal’ and sees the exhaust emit thick plumes of black smoke, originated on the truck racing scene in the United States. Some motorists now illegally modify their vehicles to produce the same effect.

In September 2021, a sixteen year old crashed into a group of six cyclists in Texas after allegedly ‘rolling coal’ at them in a Ford F-250 pick-up truck. The teenager was charged in November with six counts of felony aggravated assault with a deadly weapon.

The Facebook account from which this week's footage originated appears to belong to either the passenger or driver in the video. The same account posted an image of a 4x4 vehicle with a modified exhaust at the beginning of January. The man works for a haulage firm based in Bristol.

The video has been shared over 13,000 times since it was posted on Wednesday. While the action was criticised by local cycling groups on Facebook, one of the comments under the original video described the modified vehicle as “everyone’s new car after the new UK laws about cyclists”.

If anyone knows the victims or has been subjected to a similar incident, please get in touch with us at info [at] road.cc or send us a message via the road.cc Facebook page.