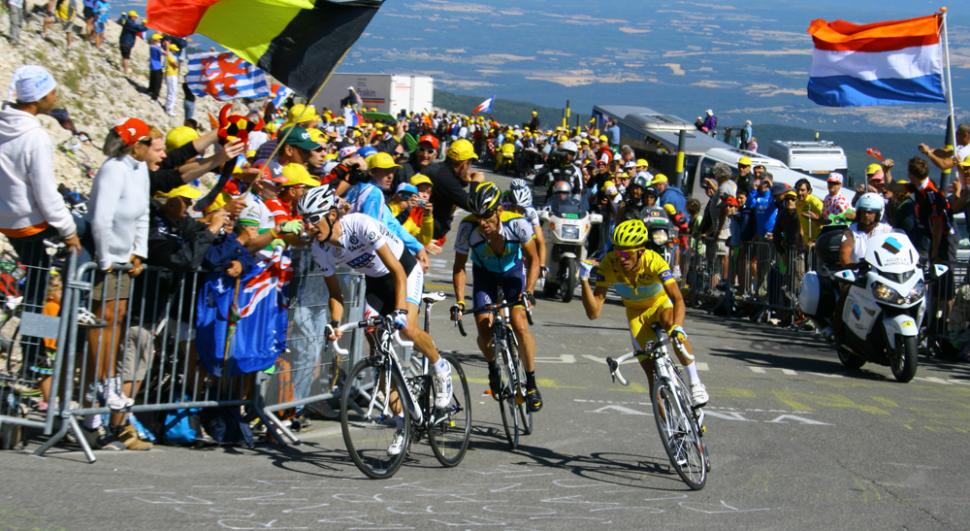 "The biggest enemy was on your own team," says Spaniard of American team-mate at Astana...
by Simon_MacMichael

“Don’t f*ck me” – words that Alberto Contador claims then Astana team-mate Lance Armstrong threatened him with in a one-on-one conversation on the team bus during the 2009 Tour de France as tensions between the pair boiled over.

The exchange came the day after Contador had moved ahead of Armstrong in the overall standings after attacking on a mountain stage from Barcelona to Andorra.

Recounting the episode this week to this week to Spanish YouTuber Valentí Sanjuan, Contador gave his version of the events that saw him all-but-isolated within the team during the three-week race, which he would go on to win.

He said that the morning after that stage to Andorra, Astana manager Johan Bruyneel asked the team if anyone had anything to say. According to Contador, Armstrong accused him of “not respecting the team’s tactics.”

“I interrupted him,” Contador said, telling Armstrong, whom he said had criticised him on social media throughout the year, “If you want respect, you have to be the first to give it. You’ve found fault with me since the start of the year, as well as with the rest of the team.”

Contador says that Armstrong replied, “Okay, Pistolero,” and then, “Everyone got off the bus and we were alone. He came up to me and said, ‘Don’t f*ck me’. The biggest enemy was on your own team.”

The race formed part of Armstrong’s ‘Comeback 2.0’ as he returned to the sport four years after claiming the last of the seven successive Tour de France victories he would subsequently be stripped of when he was banned from the sport for life for doping.

All seven of those wins had been masterminded by former US Postal and Discovery Channel sports director Bruyneel, under whom Contador took his first Tour de France victory in 2007, and who had moved to Astana ahead of the 2008 season.

Even ahead of the race, there was a media frenzy about who would lead Astana – the Texan who had dominated the Tour de France for the first half of the decade, or the young Spaniard who had followed up his conquest of the yellow jersey with victories at both the Giro d’Italia and the Vuelta.

“The Tour started with a lot of controversy about whether the leader was Armstrong or me,” said Contador, who had missed the chance to defend his title the previous year due to Astana being excluded from the race by organisers ASO after Alexandre Vinokourov had been thrown off the 2007 race for an illegal blood transfusion.

“I returned to the Tour after they did not let us participate in 2008 and I said: ‘I have to win whatever it is’. He [Armstrong] came back to cycling, to my team, and said he wanted to win the Tour. There was tremendous tension. Even our teammates were tense.

“Before starting the Tour I went to speak with Lance directly in his room and he said: ‘For me It is better that you win the Tour than I win’.

“That was the day before the first time trial. Then I saw him post on Twitter: “Tomorrow in the time trial we will see who is the leader.”

Even before that time trial, where Contador finished second to Cancellara, 18 seconds ahead of 10th-placed Armstrong, the Spaniard sensed that his position in the team was being undermined.

“Three days before starting the Tour they told me that my trusted mechanic, Benjamin Noval, was not coming. I said, 'It's a joke.' And they left him at home.

“They try to undermine you in many ways, but when you have such a clear objective, you don't care. There were complicated and down times.

“For the Monaco time trial I had to buy a state-of-the-art disc wheel because there were only two on the team and they told me they were for Lance. And I was the leader, in theory. I spoke to the Milram team, who used the same type of wheel, and was able to buy one for them.

“When I showed up at the start with that wheel, Armstrong was surprised and the sports director told him that I had bought it.”

There was another flashpoint on Stage 4, which provided a day’s racing that still lives on in the memory, with Mark Cavendish’s HTC-Columbia team smashing the race to pieces in the crosswinds on the way into La Grand Motte.

Armstrong would be the right side of the split, enabling him to leapfrog Contador on the general classification.

“It was windy and George Hincapie, Armstrong’s friend [and now road captain at HTC-Columbia], told me that they were going to split the platoon.

“At the last moment there was a split, Lance went out in front and I was left behind. My team was leading when I was supposed to be the leader …  Evidently the radio was broken,” he added, ironically.

Armstrong lay second on GC and Contador third on the morning of Stage 7 of the 2009 race, the first mountain stage, with the American on the same time as yellow jersey Fabian Cancellara of Team Saxo Bank and 19 seconds ahead of his Spanish team mate.

On the day’s final climb to Andorra-Arcalis, Contador attacked with 3 kilometres remaining and took 21 seconds from his overall rivals, moving into second place overall behind AG2R-La Mondiale’s Brice Feillu, a member of the day’s break who had now moved into the race lead.

Contador said that before the stage, Bruyneel had told the team, “Today we are going to ride quietly, in a group, we are not interested in anything else,” which he said left him frustrated since he had been itching for the arrival of the mountains and the chance to attack.

In the event, it was attacks from rivals – first Cadel Evans, then Jurgen Van der Broeck – that prompted Contador to follow, and then pass them to finish clear of the GC group at the finish.

Contador would eventually move into the yellow jersey in the Alps on Stage 15, and by the time the race finished in Paris the following week his margin of victory was 4 minutes 11 seconds over Saxo Bank’s Andy Schleck, with Armstrong a further 1 minute 14 seconds back in third place – although after his ban, that would be awarded to Garmin-Slipstream’s Bradley Wiggins following a race that marked his breakthrough as a Grand Tour contender.