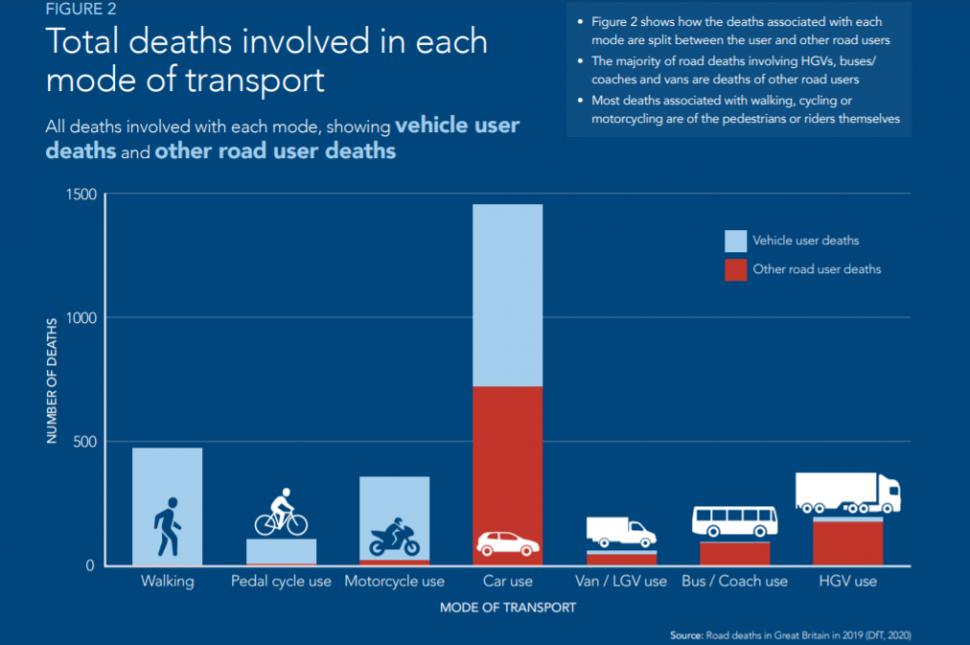 A non-governmental organisation (NGO) which advises Parliament on transport safety has published a report which starkly illustrates which types of transport are responsible for most deaths on Britain’s roads.

Entitled What Kills Most on the Roads – New Analysis for the New Transport Agenda, the report has been published during National Road Safety Week by the Parliamentary Advisory Council on Transport Safety (PACTS).

It uses data compiled from police reports by the Department for Transport (DfT) that is published annually in its Reported Road Casualties – Great Britain report, the latest relating to 2019.

According to its authors, the “new transport agenda” referred to in the report’s title relates to how the coronavirus crisis “has fundamentally changed the transport agenda, perhaps irreversibly,” with the promotion of active travel “now a priority for governments and city mayors in many parts of the world,” including the UK.

They say that “The aim of this report is to show the total casualties associated with each major travel mode and the level of danger imposed on other road users .

“This is a complementary analysis to the conventional presentation of road casualty data where this information is not easily found.

“We are not suggesting that conventional analysis is wrong but that it does not tell the whole picture and may sometimes be misinterpreted. We hope that the Department for Transport and others will adopt this type of analysis into mainstream analysis and reporting.”

The authors are clear that there analysis is based on the type of vehicle involved in a fatal crash in which a particular type of road user is killed, something imposed by the way the DfT presents the statistics, and which is why it talks about cyclists or pedestrians killed by HGVs or cars, rather than drivers.

The graphic presentation of the analysis – as shown at the head of this article – clearly shows which vehicles are involved in crashes in which someone on foot, or on a bike, is killed, and in the vast majority of cases it is a car, a point reinforced throughout the report, as below, for example. On the issue of whether more walking and cycling will lead to more casualties (and certainly in 2020 to date we at road.cc have seen more reports of cyclist fatalities than in any year since the site began in 2008), the authors say: “There is no question that safety for pedestrians and cyclists should be greatly improved. However, PACTS does not believe that realistic increases in walking and cycling will have a significant impact on overall fatality numbers.”

They add that “Experience shows,” among other things, that “The scale of modal shift, in mileage terms, is likely to be quite small. The typical car driver is not going to switch 5,000 miles a year by car for 5,000 miles on a bike or on foot. Short trips might be swapped but where the switch is for a longer car trip, it is likely that the trip on foot or by cycle will be a much shorter than the previous car trip.”

In his foreword to the report, PACTS chair Barry Sheerman, the Labour MP for Huddersfield, said: “Road safety in the UK has come a long way in the 40 years since I helped to make it compulsory to wear a seat belt in cars.

“In 1979 over 6,000 people were killed on Britain’s roads; in 2019 it was below 2,000. Unfortunately, some take this as ‘job done’. It is not. This level of death plus 30,000 serious injuries is still an unacceptable annual toll for using the roads. As the road safety minister Baroness Vere so honestly said at the Department for Transport’s international road safety conference in September last year 2019, it doesn’t always feel safe. Many road users and bereaved families would go a lot further.

“I know that to bring about change we need good research, delivered with passion in a language that connects with people, politicians and pundits. We must not be afraid to talk in plain terms about the dangers on the road and who is affected most.

“I know too that today we face multiple challenges, the greatest of which is sustainability – for our communities, our economy and our planet environment. We must show that road safety and danger reduction are critical to these other agendas and can be integrated with them.

“The coronavirus pandemic has had terrible consequences. But [it] has also shown that change is possible, necessary and desirable. It has reset the policy agenda. I am determined that PACTS will make a major contribution to this new agenda,” he added.

You can find the full report here.