Bike shops see boom in repairs and servicing due to coronavirus

Bicycle retailers and workshops across the UK are reportedly experiencing a boom in business as people switch to two wheels to get around during the coronavirus pandemic, whether that means buying a new bike or getting one that has been languishing in a shed or garage serviced.

One shop in west London specialising in bicycle repairs and the sale of second hand bikes told road.cc that they have experienced their busiest trading period ever, selling more bikes in the past week than they would normally do in a year.

Lucian, who works at the Bicycle Repair Shop on The Vale in Acton, said that part of the appeal of buying second hand bikes was that people would not be too bothered if they subsequently got stolen, given the relatively low outlay compared to buying one from new.

The sudden rush of purchasers does, however, mean that the business is beginning to run low on stock, so if you’re local and have a spare bike you no longer need, it may be worth calling them on 020 8749 7344.

He also said that there had been an influx of customers in recent days bringing in “rusty and dirty” bikes that had been left unloved in sheds and gardens, looking to bring them back to life.

In his address to the nation on Monday evening, Prime Minister Boris Johnson announced, among other things, that non-essential retail businesses would have to close.

Excluded from the list among others, however, were bicycle shops, as much for their role in repairs and maintenance as for selling bikes – although, as Cycling UK’s policy director, Roger Geffen, underlined yesterday, a distinction needs to be drawn between essential and non-essential visits.

“This is not the moment to go out and browse for a nice new bike,” he said.

So, if you’re a key worker in London, say, who wants a bike for your commute to avoid crowded public transport, that’s fine; if you already own one or more bikes and are thinking about your next purchase, it isn’t.

"However it’s another matter if you’re getting that neglected bike out of the shed so you can make essential journeys without relying on public transport or a lift in someone else’s car and you therefore need to get a replacement tyre or inner tube, or to get the bike repaired by a professional mechanic,” Geffen continued.

"It is for this reason we think the Government is to be applauded for keeping bike shops open. Cycling is a great way not only to make that one bout of exercise each day, but also to make those essential journeys.

Some bike shops, while continuing to trade, aren’t letting people inside the premises at all, though fro reasons of social distancing.

Fudges Cycles in Chiswick, for example, is only undertaking repairs and servicing and customers have to wait outside, with staff coming out to ask them what they need, then taking the bike inside. 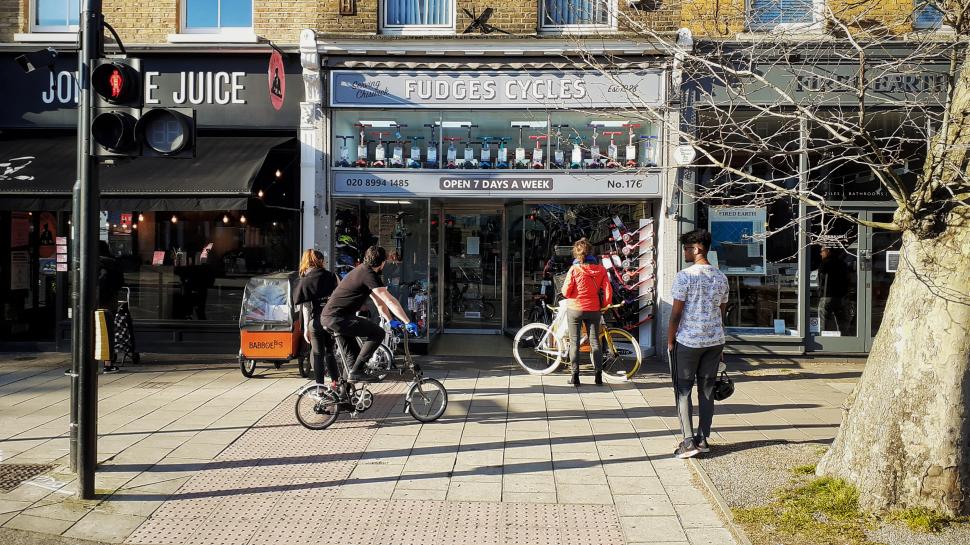 Likewise, announcing this morning that it planned to reopen some stores later in the week the UK's largest bike retailer, Halfords, said that it would focus on essential products and servicing and with strict social distancing measures in place, with customers unable to enter the premises.

According to this Guardian article publsihed yesterday, members of the members of the Association of Cycle Traders (ACT) are primarily seeing strong demand for repairs and servicing, as well as entry level bikes for people looking to ride to work for the first time.

The ACT’s Jonathan Harris said: “In the last 10 days there has been a surge in the number of people getting bikes out of sheds and garages, dusting them off and thinking ‘I might need this.’”

Meanwhile, the Bicycle Association’s executive director, Steve Garidis said: “Cycling has a strategic role to play in local transport resilience – key workers are able to get to work in towns and cities without public transport or relying on lifts.”