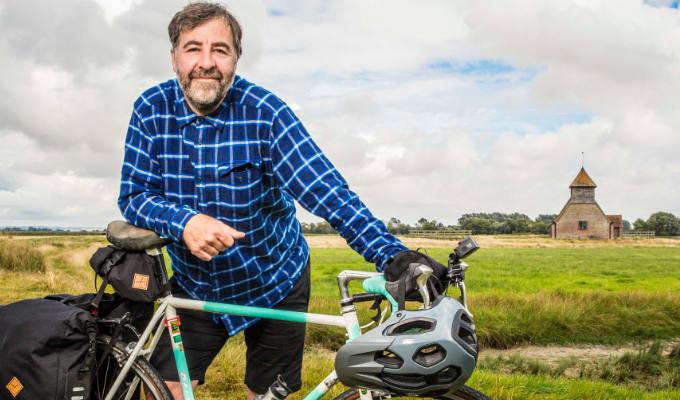 "Now it's time for quite out-of-shape people getting lost as they pedal towards a beautiful landmark that’s supposed to be just over there."...
by Will Bolton

Comedian David O’Doherty will host a new chat show on Channel 4 in which he goes on bike rides with fellow celebrities.

Grayson Perry, Richard Ayoade, Mel Giedroyc and Joe Wilkinson will all join O’Doherty on 'The Ride' as they explore some of the most picturesque parts of the UK.

O’Doherty – who came up with the idea for the series – said: "I think we've all seen enough of very fit cyclists racing up mountains and whooshing round tracks on our televisions.

"Now it's time for quite out-of-shape people getting lost as they pedal towards a beautiful landmark that’s supposed to be just over there."

The comic and his guests will visit Wales, Northumberland, Dungeness in Kent and the Suffolk coast during the series.

Jonny Rothery, commissioning editor for Channel 4, said: "Charming, revealing and full of picturesque locations, The Ride puts a new spin on celebrity interviews as we see the wonderfully funny David O’Doherty take to the road with these four brilliant characters."

And Peter Holmes, executive producer for Zeppotron, added: "We are so pleased to be able to help David share his passion for cycling as he freewheels around the most beautiful parts of Britain exploring the minds and calves of his fascinating guests."

A release date for the series has yet to be revealed.