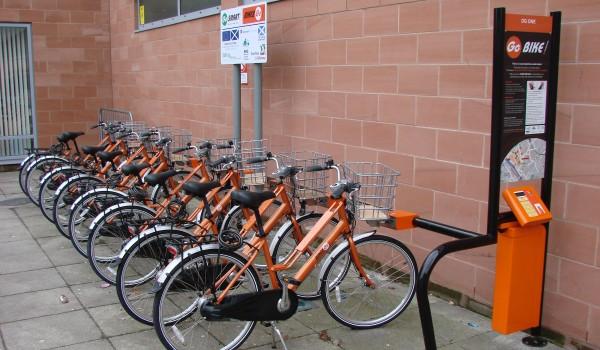 What was hailed as a ground-breaking cycle hire scheme for Scotland when it was launched three years ago could be scrapped and expansion plans are being shelved after it emerged each hire of a bike has cost £60 – leading a local politician to say that it would have been cheaper to buy each user their own bicycle.

Similar problems regarding low uptake have been encountered elsewhere such as Nottingham and Blackpool, while even London's Barclays Cycle Hire Scheme faces huge cash shortfalls - but other towns and cities are forging ahead with their own schemes.

Since the Bike2Go scheme – aimed at encouraging people to leave their car at home – was launched in Dumfries in September 2010, its bikes have been hired just 2,270 times, an average of around two rentals a day, reports the Galloway Gazette. Costs to date are £144,170. It was the first such scheme in Scotland.

Following last year’s elections to Dumfries & Galloway Council, Labour replaced the Scottish Conservatives as the largest party. In July this year, Labour councillors demanded a report outlining the scheme’s costs, which is due to be presented to the planning, housing and environment committee next week.

The committee’s chair, Colin Smyth, said: “The Labour Group have been deeply concerned about this scheme for some time because we simply don’t think it was value for money. This report shows we were correct.

“The scheme has worked out at £60 per rental and quite frankly it would have been cheaper for the Scottish Government and the others who provided the £140,000 funding, just to buy everyone who used it a new bike.

“We should be supporting cycling in other ways such as investing in cycle paths. The Bike2Go scheme was an experiment under the previous council administration and frankly it failed. That’s why the new administration will draw a line under it and won’t waste taxpayers’ money on introducing it to other towns.”

The days of the original scheme in Dumfries seem numbered unless someone can be found to take it on, as Councillor Smyth explained: “Once the bikes in Dumfries get to the stage where they need to be replaced we will simply have them removed unless a private company or voluntary group wants to take over running the bikes.

“There were a lot of positives in the Go Smart scheme such as the improvements to bus stops and travel advice, but it’s time to park the Bike2 Go scheme and move on. We will be taking some of those positives forward to other towns using a modest grant of £9,000 from the Scottish Government.”

Dumfries is not alone in rolling out a cycle hire scheme only to see extremely low levels of uptake.

In June this year, the BBC reported that a similar scheme in Nottingham, called Cardcycle, set up in September 2012 at a cost of £350,000, had  attracted an average of just one user a day.

Sue Flack, Nottingham City Council’s director of planning and transport, insisted the scheme would be viable in the long term, however, saying: "We're not doing the same thing they did in London with the Boris bikes.

"We haven't got as many destinations where you can expect a lot of people will want to bike to.

"We'll be building the scheme up over the next couple of years," she added.

Even London’s Barclays Cycle Hire Scheme – which notched up 1 million journeys in its first ten weeks of operation – is failing to cover its costs by a huge margin.

In 2012/13, its operating costs were £24 million, with Barclays sponsorship contributing income of £5 million and membership fees and hiring charges a further £8 million, leaving a loss of £11.1 million, according to Transport Xtra magazine.

Membership fees were doubled at the start of this year, with the price hike forecast to result in additional income of between £4 and £6 million – nowhere near enough to cover the shortfall, and recent analysis of hiring data by the website MayorWatch suggests usage is down during 2013.

A flagship scheme in Blackpool launched with the help of Cycling England in 2009 with plans for 500 bikes at 100 hiring locations in the seaside resort was suspended after the council said last December it was unable to meet the annual cost of nearly £100,000.

Originally operated by Hourbike – which also runs the Dumfries and Nottingham schemes – The Blackpool Gazette reported that it was relaunched under the management of community enterprise Cycles Recycled on 1 July this year.

The revised scheme has seen bikes hired out from locations on the Promenade between 8am and 8pm. The scheme will close for the winter when the Illuminations are switched off this Sunday.

However, other towns and cities have not been put off by the experience of other places and are queuing up to launch their own schemes, with Liverpool, Birmingham, York and Slough among those announcing plans to roll out their own cycle hire initiatives.