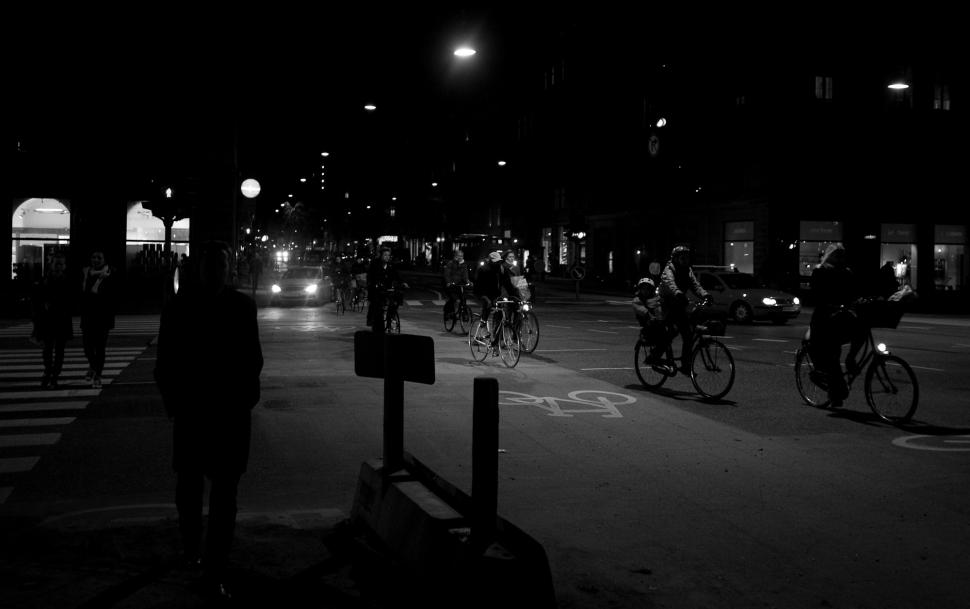 Cycling in the dark (CC lisenced by Flickr user Boegh)

“One does begin to wonder what is going on"… says prosecution lawyer...
by Elliot Johnston

Lancashire police arrested and locked up a Blackpool cyclist for riding without lights last week, but when the case came to court the prosecution declined to proceed saying it was not in the public interest to do so.

Edward Copland, 38, was arrested by police when he was caught pedalling along a street-lit urban road in dark clothes and without lights on his bike, and according to a police spokesman refused to give his details - although this does not appear to be the charge on which Mr Copland went before the court.

After being taken to the local police station, processed and held in a cell, Mr Copland was released, and later issued with a court summons through the post.

Shop owner Mr Copland acknowledged his guilt and spoke to the Blackpool Gazette: “OK I did not have the lights on - but the hour had just changed on the clocks, normally it would have been light on my way home.”

As the case was put forward at Blackpool Magistrates Court, Crown Prosecutor Alison Quanbrough told the justices: “I must admit I was surprised to see this allegation brought to court. It would appear it was dark at the time and the defendant was wearing dark clothing. The police also say it was a dark coloured bike.

“However I do feel it is not in the public interest to continue and take this allegation any further.

“One does begin to wonder what is going on.”

The Magistrates withdrew the case before Mr Copland had the opportunity to plead guilty to the charges. After stepping down from the dock, the 38 year old bemoaned the ordeal, saying: “What a complete waste of public money. It must have costs thousands in police and court time to put me through this.”

According to a spokesperson from Lancashire Police Mr Copland refused to provide his details to the officer, and was subsequently arrested.

The shop owner from Blackpool isn’t alone in being caught out by the clocks going back. Police in Oxford issued 171 riders £50 fines in the space of three hours last Friday in a crackdown operation against light-less cyclists.