Continental has expanded its cyclo-cross tyre range in time for the current race season with the launch of the new CycloX-King and Mountain KingCX cyclo-cross tyres. Both are available primarily as clinchers and offered with the company’s BlackChilli rubber compound, which they use across their road and mountain bike range.

Until now, Continental hasn’t really catered for the cyclo-cross market, just a token effort with the Speed King Cross tyre. These two new tyres offer cyclo-cross racers and fans two tread patterns, based on its mountain bike tyres of similar names, that should cope with a wide range of ground and terrain conditions. The CycloX-King is described by Continental as being suited to “hardpack, mixed and wet” conditions while the Mountain KingCX is for “mixed, wet and mud” conditions.  They’re both a UCI legal 32mm width. The Mountain KingCX, as their designated wet weather and mud tyre, has a tread pattern made up of deep square blocks spaced well apart, with a paddle shape central section. The shoulder knobs are arranged at an angel to leverage better traction through the corners and for tackling the nemesis of many ‘cross racers, off-camber sections. 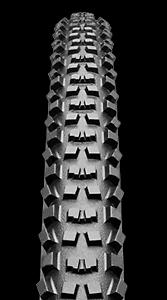 There is just one version of this tyre available, and it has a claimed 320g weight and costs £49.99. 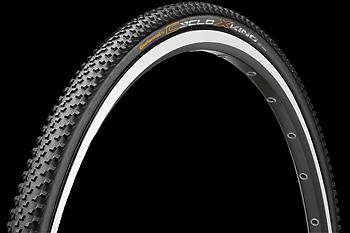 The CycloX-King is based on the popular X-King mountain bike tyre, a favourite with racers because of its fast-rolling tread pattern. The cyclo-cross tyre carries the same tightly packed, small yet deep, block arrangement. Tall shoulder blocks should give the tyre bite through the corners. This has all the credentials for a good all-round tyre, as happy on harder tracks and asphalt as it is in the dirt, soggy grass and mud. The Black Chilli compound gives good grip in  “hard & dry, cold & wet, roots, off-cambers, grass or stone” conditions, claims the company.

This tyre is available at a couple of prices, as Continental clearly see it being more suitable to everyone from casual cyclo-cross enthusiasts wanting a fit-and-forget tyre to racers wanting a good intermediate and mixed conditions tyre. At the top is the CycloX-King RS with BlackChilli rubber commanding a £49.95 price tag. It’s clearly aimed at racers.  Still using the same tread pattern but expanding the width out to 35mm and losing the BlackChilli compound, the tyre is available in a folding or wire bead for £34.95 and £19.95 respectively. Right at the top of the pile, and a tyre that is in the final stages of development and is currently being testing by a handful of top UK racers, is the CycloX-King tubular. Serious cyclo-cross racers are still wedded to tubulars, they offer some advantages such as being able to run lower pressures and allow the use of lightweight carbon deep-section wheels, so Continental has to offer a tub if it wants to tap into that market. At £79.95 it’s not cheap but on a par with something like the Challenge Grifo tub. On our scales the 419g weight is also competitive with that tyre. 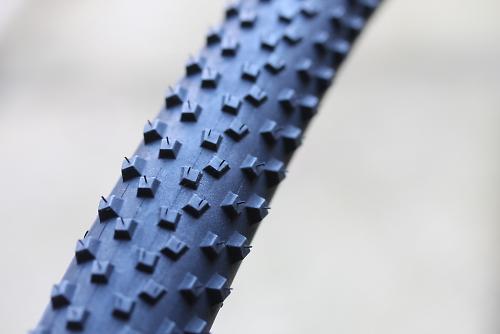 Yes that’s right, we’ve just landed a pair of these new tyres to review. Once we’ve got them glued onto some rims we’ll let you know how we get on. They should be in the shops in the next couple of weeks.

The range can be viewed at www.conti-tyres.co.uk/conticycle/cyclocross.shtml