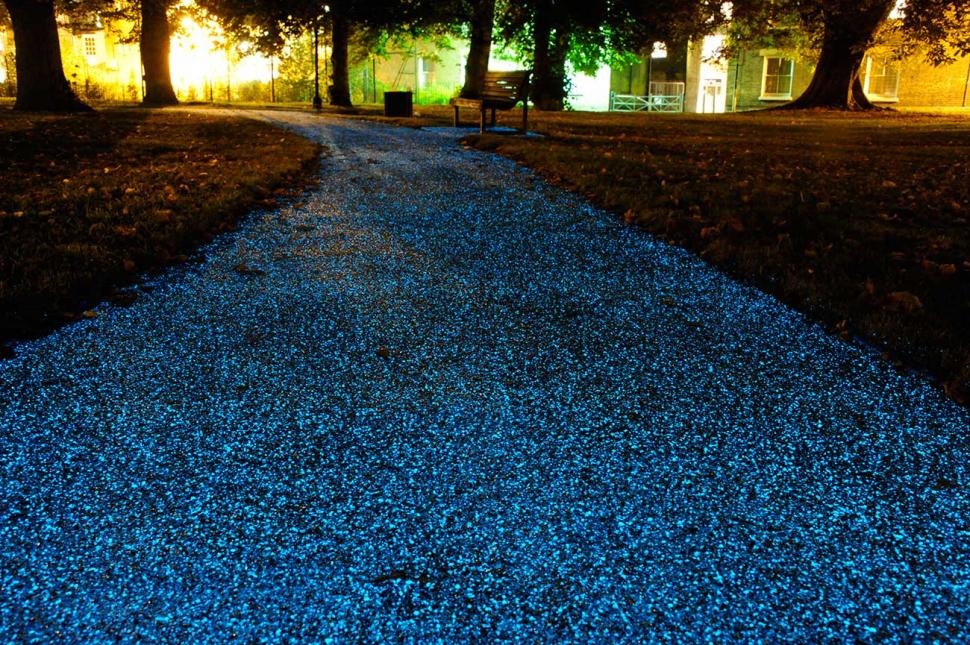 Video: Cambridge gets world's first glow in the dark path - coming soon to a city near you?

Light-emitting UV crystals save time and cost and improve safety, says company behind concept
by Simon_MacMichael

A British company has developed a ‘glow in the dark’ path surface – claimed to be a world first – and is currently trialling it at a park in Cambridge. If successful, the concept could be rolled out elsewhere in the city for footpaths and bike paths. The business behind it hopes it will also be used in other places in the UK.

Pro-Teq Surfacing UK's Starpath has ultraviolet (UV) crystals embedded in its surface, which soak up UV light during the daytime then release energy at night. The result is a luminous surface that from the pictures we’ve seen almost has an unearthly beauty about it.

The concept, which is being trialled at Cambridge’s Christ’s Pieces park, is explained in this video from Pro-Teq Surfacing UK:

It’s not the first time we've come across luminous surfacing – earlier this year, the BBC reported that researchers in the Netherlands were testing using similarly light-emitting crystals (they were also trialling heated cycle paths) on white lines in the centre of a road as well as other road markings (see video below), but it’s the first time we’ve seen it in the UK.

Both in Britain and in the Netherlands, one of the prime motivations behind developing luminous surfaces is the same – local authorities are short of cash, and one way they are saving money is by switching off lighting on streets and paths.

Besides the fact that the path’s luminous properties mean that no streetlamps are required, and can also help local authorities reduce their carbon footprint. Another claimed advantage is that it can be laid on top of an existing surface.

That means that unlike when a normal path is replaced, it does not have to be dug up and removed, thereby cutting out time and cost and having to dispose of waste material afterwards.

The trial path in Cambridge, which covers 150 square metres, took 30 minutes to prepare and was ready to be reopened to the public just four hours after work began.

Pro-Teq’s owner, Hamish Scott, said: “There is nothing like Starpath in the world, this product adjusts to the natural light, so if it is pitch black outside the luminous natural earth enhances, and if the sky is lighter, it won’t release as much luminosity – it adjusts accordingly, its almost like it has a mind of its own. It is exceptional.

“At Pro-Teq Surfacing (UK) Ltd, we use natural earth products and it cannot be replicated by any other source; you need to physically see it to believe it, this is pure nature doing its work.”

The surface also has anti-slip properties and is non-reflective, with Pro-Teq saying that it can help reduce the risk of collisions between cyclists and pedestrians at night.

Mr Scott added: “Councils spend significant sums of money fully replacing existing pathways when the existing surfaces have reached the end of their practical life. Our product is cost effective, fast to apply and fast to set, is an anti-slip surface, while the client has a choice of size and colour of aggregate.

“Once the aggregate is laid we apply a finishing coat, which is specially formulated to ensure the surface is water-resistant, and provides longevity to the finished product. Further, the surface is environmentally-friendly and aesthetically pleasing.”

He continued, “We are so pleased Cambridge City Council has agreed to trial the product. Starpath has attracted much interest from the public, in Cambridge and other councils in the UK. We continue to refine and adapt the product to ensure it meets the on-going needs of our customers and the environment.”

Cambridge City Council’s executive member for public places, Andrea Reiner, was quoted on Telegraph.co.uk as saying: "This is an interesting idea that the surfacing company asked if the council would like to explore for a trial period.

"If we decided to put this to use on paths in the city, we would want to balance any safety benefit against the desire to preserve the historic nature of our open spaces."

[Note: We understand that paths on Christ's Pieces are no-cycling and this article has been amended accordingly. Pro-teq's original release on this project says: "This product has recently been sprayed onto the existing pathway that runs through Christ’s Pieces open space, Cambridge between the city centre and the Grafton Centre, and is used by pedestrians and cyclists during the day and night."]