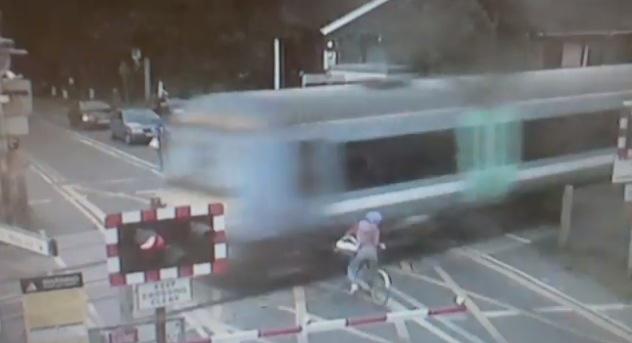 A Cambridge woman who came within inches of death when she ignored barriers and warning lights to ride her bike through a level crossing as a speeding train approached has been interviewed by police.

Officers from British Transport Police are now considering what action to take against the 26-year-old whose actions risked her own life as well as those of passengers on the train, reports the BBC.

Following the incident at Waterbeach in Cambridgeshire on 12 September, police posted the video on YouTube in an attempt to find the woman and to warn the public of the dangers of misusing level crossings.

The video, which showed the woman ignoring the barrier covering the left-hand carriageway then braking hard as she realised her danger, was made private on YouTube after she came forward last week.

Train operator Greater Anglia says that the driver of the train had to apply the emergency brake as a result of the near-miss at the crossing, where up to 100 trains pass each day.

A BTP spokesman said that such incidents were “extremely rare,” although there have been a total of 70 reported incidents at level crossings in Cambridgeshire alone during 2013.

A closure programme which will see 750 crossings removed from the network by April 2014. More than 600 had already been closed by October 2012