Seven years in development, Brooks’ Cambium saddle was on show in all its rubber and organic cotton glory at Eurobike. It also picked up Brooks’ first Eurobike Gold Award for its novel approach to saddle construction, combining the traditional Brooks ‘hammock’ design with aluminium ends, tubular steel rails and a rubber top.

Brooks was rescued from the wreckage of Raleigh and Sturmey-Archer in 2002 by Italy’s Royal group, which makes Selle Royal and fizik saddles among other things. There was some concern at the time that the ‘real’ Brooks would vanish and just become a brand name, but in fact Brooks has flourished under its new owners. The hipster trend for retro leather saddles hasn’t hurt either. 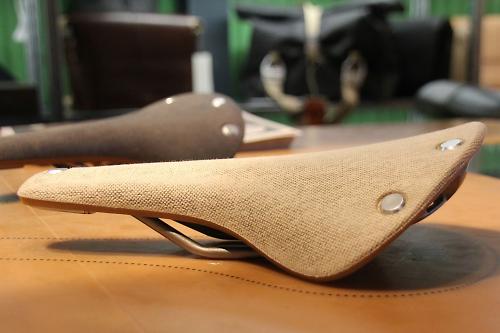 Brooks’ new owners and management are dedicated to preserving the company’s heritage so when the idea was born to produce a non-leather saddle it couldn’t be just another plastic hull/foam padding/leather cover seat with a Brooks logo. It had to be something special.

Brooks went back to a period during the second world war when a shortage of leather meant that saddle makers experimented with rubber for saddle tops.

But the problem with natural rubber is that it degrades over time, so the rubber Brooks is using for the Cambium is vulcanised and blended to increase its life. It’s then covered with a layer of waterproofed cotton to protect it from abrasion and the elements. 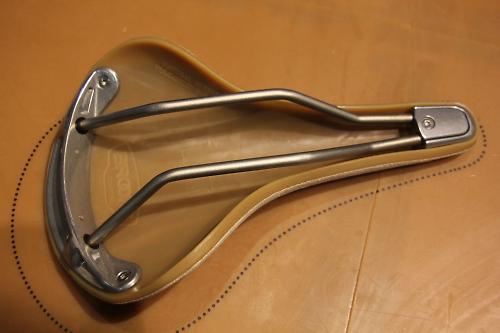 Brooks managing director Cristina Würdig told us that in the development of the Cambium Brooks had tried a range of different materials and constructions, including trying to put a leather cover over a rubber hull. Then they’d had a lightbulb moment and realised they could dispense with the leather altogether and still make a ‘hammock’ saddle with the ends suspended between the rails, which is the heart of the Brooks design.

Getting the nod from the craftsmen who make Brooks leather saddles was an important step. Cristina Würdig told us, “We took one of the first prototypes to Birmingham and showed it to the guys who make the saddles. They said ‘Yes, we could make this. This is a Brooks saddle.’”

And make it they will. At the moment, Cambium saddles are assembled in Italy, but production will move to England in due course.

Current details and the future

There are two models of Cambium at the moment, the C17 and C17s. They’re the same width, but the C17s has a shorter nose and is intended for women. Next up will be the C15, a narrower shape for racing, based on the Brooks Swallow (the C17 is based on the venerable Brooks B17).

The range will increase from there, with more purpose-specific seats planned. Over dinner with Brooks and Royal group staff we witnessed a passionate discussion over how to make a lightweight Cambium. Should it have carbon fiber rails, or would that not be Brooks?

The current Cambium has hollow steel rails that attach to aluminium pieces at the front and back of the saddle. The rubber-and-cotton top is held in place with bolts, and that all means that any part can be replaced by the owner, rather than a Cambium having to be sent for repair.

To make a lighter Cambium, Brooks could steal an idea from labelmates fizik and use a one-piece forged aluminium rail like the Kurve saddle’s. A Cambium in the 200g range would certainly get people’s attention, especially among riders who aren’t Brooks’ traditional constituency.

Take a look at the Cambium section of Brooks' website for more details. The Cambium will cost €125 in Europe, so should be a bit over £100 in Blighty.

1
Near Miss of the Day 454: Driver tries to overtake on blind corner, thinks better of it
2
Drunk cyclist with defective brake jailed for injuring pedestrian in Norwich
3
Canyon unveils 6.2kg Ultimate CFR road bike
4
After child skids into wall on her scooter, are Bath Two Tunnels cyclists and other users of greenway being deliberately targeted with oil?
5
Richmond Park reopens to rat-running drivers after almost five months of car-free roads
6
DT Swiss claims new ARC Dicut 1100 and 1400 wheelsets are even more aero
7
Breaking News: 2020 UCI Road World Championships cancelled
8
Near Miss of the Day 451: Driver flirts with head-on collision to get to red light slightly sooner