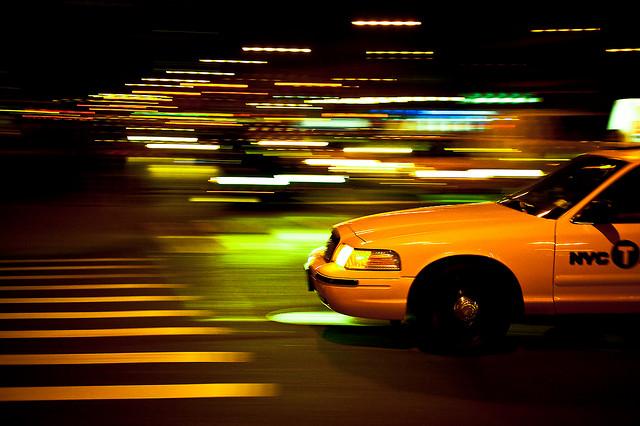 A British woman on holiday in New York City has had her left foot severed after a taxi mounted the sidewalk, the driver having reportedly lost control of his vehicle after colliding with a cyclist with whom he had been arguing.

The woman, 23-year-old Sian Green from Leicester, was on the first day of her visit to the city with a friend. The pair were sitting by a fountain eating hot dogs when the yellow cab ploughed into her.

Olivo said that he had been riding up Sixth Avenue when, at the junction with 49th Street one block from Rockefeller Center, the taxi cut him up and the driver started beeping his horn, reports the New York Daily News [Warning - some of the descriptions, pictures and videos linked in that article are graphic - ed].

The cyclist, who suffered cuts and bruises, told reporters: “I told him to stop because I’m trying to go forward and people are crossing.

“He loses his patience. He gets angry. He accelerates. Hits me.

“I'm on the roof of a car like in a Steven Seagal movie, okay. And I’m on the sidewalk. I’m like this looking up at the sky.”

Himon, who claimed “it was an accident,” was issued with a summons for being an unauthorised driver, but was not arrested in connection with the crash itself.

The New York Daily Post says that Himon, originally from Bangladesh, has been driving cabs in the city since 2010, but has racked up nine penalty points on his driver’s license for offence including speeding and running a red light.

His brother, Sayed Shamen, said of yesterday’s events: “He had a fight with the bicyclist.

“He went to hit the brake and stepped on the accelerator instead.”

Among those who rushed to Miss Green’s aid were celebrity doctor Mehmet Oz, who was said to be filming for his TV series nearby.

He credited quick-thinking plumber David Justino, working at an adjacent building site, for saving the British tourist’s life after he removed his belt and used it as a tourniquet to help stem the blood.

Her father, Jason Green, has flown to New York to be at his daughter’s bedside in hospital and told the Leicester Mercury: "She is in recovery now, and they have had to amputate what's left of her foot.

"We are a really close family we are all devastated by what has happened.

"We don't know what to say.

"We just want to be at our daughter's side right now."

A Foreign & Commonwealth Office spokesman said: "We are aware of a traffic incident involving a British national in New York City.

"Staff at the British Consulate General in New York are providing consular assistance at this difficult time."