Coming to the capital for RideLondon this weekend? Why not stop by Westminster Bridge Saturday morning and wave off the riders tackling a 2000-mile, non-stop, unsupported race to Istanbul, the QuickEnergy Transcontinental Race 2013?

At 8am, August 3, 40 riders from 17 countries will set off with one aim: to be the first to reach Istanbul after traversing the whole of the European continent.

That’s a journey of roughly 2,000 miles, but there’s no exact race distance because there’s no exact race course. Riders will set their own route with just four mandatory points: the start in London, the finish in Istanbul and two intermediate checkpoints, the Muur van Geraardsbergen in Flanders the top of the Stelvio Pass in the Italian Alps.

The brains behind this epic belong to Mike Hall, endurance racer and winner of last year’s round-the-world event, the World Cycle Race. He’s supported by QuickEnergy and event promoters The Adventurists.

“We all believe in the need for a seat-of-the-pants race with no hand-holding,” said Mr Hall.

“Together we can deliver something beautifully hard at the pointy end and an unconstrained adventure at the other end yet with the right level of organisation and coverage where it counts.”

The idea is to put on a race that is similar to World Cycle Race but that doesn’t take months out of your life. It’s “a bit shorter so more people can fit it into real life,” he said.

It’s been important for Mr Hall and his crew to keep costs down, which is the rationale for an unsupported event.

“We want people to be able to grab a bike and just go, no support vehicles, no teams of helpers and no costly logistics or exorbitant entry fees. Just a bike, a map and a vague sense of direction will do, plus living like a hobo is much faster than staying in hotels.”

Another rider who’s travelled round the world to do the the QuickEnergy Transcontinental is Tony Hawke and since Tony is staying at the road.cc East London office we made him earn his room and board by telling us a little about his bike set-up for the race. 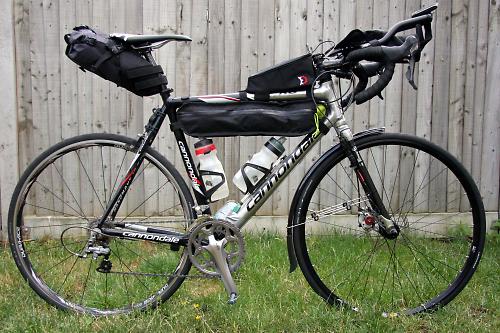 Tony says: "I chose the base bike, A 2008 Canondale R6, as I had it already and it seemed like a good idea to make use of something sitting in the shed gathering dust, rather than forking out for a new shiny toy. That said, if I were intending to do a lap of the world, I’d definitely have gone out and bought a carbon frame.

"I selected the bike bags to minimise the frontal section, and thusly, drag, and worked with a local Australian bag maker Bike Bag Dude to get a custom half frame bag that fits the front triangle perfectly, with just enough room to clear my water bottles. I chose half bag instead of a full bag, as I prefer to be able to use water bottles rather than a Camelbak. Bike Bag Dude also supplied a chaff bag for snacks, normally used vertically, that I’ve hung under the aero bars, and an Oveja Negra seat bag.

"I converted the front end to disc by changing from the standard Cannondale fork to a Bontrager Satellite disc fork that my local bike shop had lying around. The added benefit was to rake out the bike a little from its standard crit geometry to something a bit more stable. Tri bars were added to give me a few more hand/body positions, as well as the obvious aero improvements when I’m down in a tuck. They also give a bit more space to mount the Garmin and Spot, and hang the chaff bag so that munchies are close at hand.

"To keep me independent of any kind of civilisation, I swapped out the front wheel for the dynamo hubbed one that usually lives on my Salsa Fargo that I use to commute to work. Combined with my KLite dynamo light, I get around 850 lumens of light at night. During the day, this will power a USB charger to keep my Garmin and phone charged. With all of this, I shouldn’t ever be forced to stop and plug in to local power, which removes one more logistical concern.

"After seeing the weather in Europe of late, I added the front mudguard, but didn’t bother with a rear, as the seat bag does a good enough job of keeping me dry there.

"The transmission has a compact chainset for obvious reasons and I've gone for mountain bike pedals so I can walk around in shoes that won't kill me."

Tony thinks the race will take 10 days, give or take, but says, "It depends how I feel. If I get distracted in some random pub that might cost me half a day. I'm not planning to set the world alight, but if I do, that'll be a bonus."