The designer behind the Bridge Street Saddlebag is seeking Kickstarter funding through August to put it into production. It’s been a year in development and has taken 14 prototypes to get to this stage, and they plan to manufacture all bags in Warwickshire. Now they need your help. 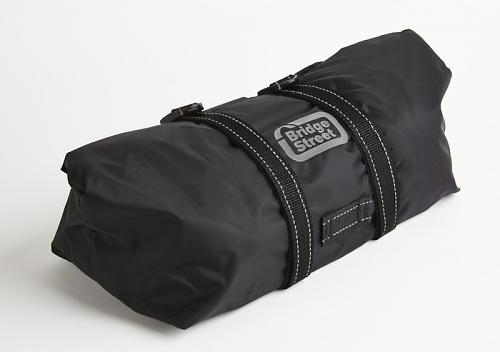 There are times when the capacity of jersey pockets and tiny saddlebags just isn’t enough to carry the supplies you need if you're planning a longer ride, whether it's an overnight Audax, a week of cycle touring, or even commuting to the office, especially if you don't want a pair of panniers on your bike. The Bridge Street Saddlebag emerged after Jonathan Ward failed to find a very lightweight bag that would allow a few essentials to be carried for a weekend of cycling.

There are already many saddlebags on the market, of course, such as the enduringly popular Carradice. The main focus of this saddlebag is weight, or lack of it: it’s about half the weight of conventional saddlebags, claims the company. It’s made from two layers of coated nylon wrapped around a hollow polymer frame. That means it’s waterproof and doesn’t swing from side to side or rub on anything as you ride.

A plastic quick release mechanism attaches the bag to the seatpost. It’s a standard design so spares are easy to come by. There's a choice of two mounts. The high mount ensures the bag is clear of the back wheel and your legs, while the low mounting looks smarter but there is the chance of the bag rubbing the back of the legs.

The bag has an expandable roll-top design, so it shrinks down if you’re only carrying a few items, and is offered in three sizes. The large has a 15 litre capacity and weighs a claimed 700g. The medium has 8 litres and a 500g weight, and the small is 4 litres and weighs 400g. Two elastic straps secure the bag down, and can be used to store a jacket over the top of the bag, increasing its carrying capacity. Inside, the bag has a zipped pocket big enough to hold a map, with a second zipped pocket a secure place to store valuables. Outside, there’s a reflective logo and a light loop so you can attach an LED.

If that sounds like the sort of bag you could use, then head over to Kickstarter now. They’re seeking £3,000, and are currently at £580 with 28 days to go.

1
Police chief says clip of Range Rover driver hitting cyclist with car doesn’t tell full story
2
You can be the first to own the new Colnago Prototipo… but it’ll cost you – plus more tech news from SRAM, Pirelli, Brompton, Apidura and more
3
Government to crack down on “reckless” riders with causing death by dangerous cycling law
4
Police officer dishes out fines to cyclists – then crashes his SUV into one in a cycle lane
5
"Unacceptably gross": Peloton cyclist's complaint over relative leaving bike in a sweaty mess goes viral
6
road.cc Recommends gets refreshed with 14 brilliant products
7
Pro cyclist no longer rides alone after two 'bikejacking' attempts as violent incidents increase
8
Cyclist driven into by Range Rover driver blasts "victim-blaming twaddle" from police who initially refused to take action