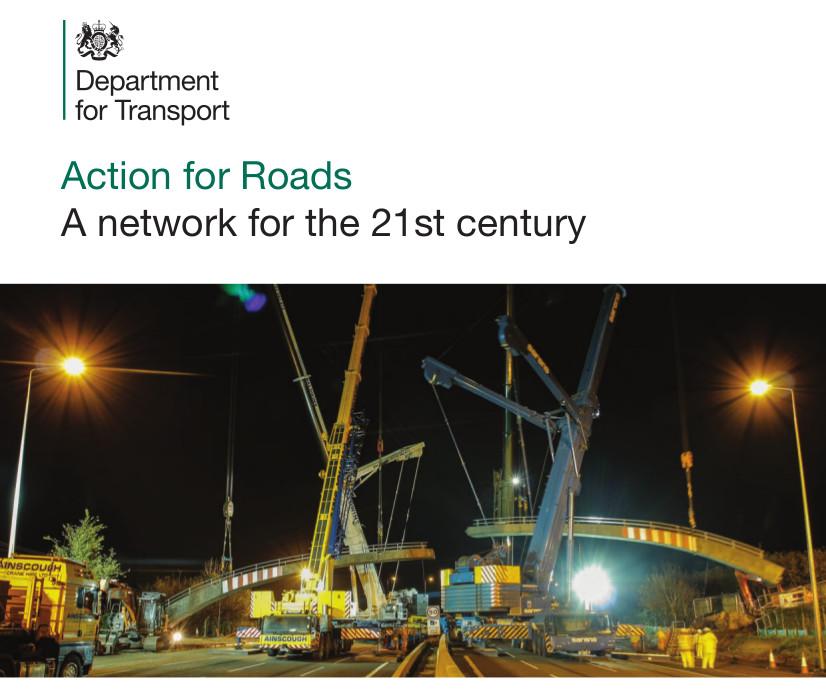 The government yesterday released ‘Action for roads: a network for the 21st century’, which details how the Department for Transport plans to spend £50 billion on roads over the next generation. How much of that will go to cycling? Somewhere between none and not much.

While the report at least mentions cycling a few times - unlike last month’s HM Treasury paper Investing in Britain’s Future, in which the level of spending on roads was announced - none of the measures mentioned has explicit funding attached. There is there is much hand-waving and talk of ‘ensuring’ and ‘encouraging’ but almost no detailed direct action to improve cycling, and there’s some worrying thinking.

For example, discussion of the strategic road network - motorways and major A roads - focuses on how and why the Department for Transport plans to increase the capacity of the network for motor traffic. Where major roads and people on bikes are mentioned together it’s assumed cyclists simply don’t want to use those routes.

“Most cycling takes place on, or alongside, the local road network, because these roads provides the most direct access to the places people want to go,” says the report, completely failing to consider that cyclists might not use major roads because even though they go straight from A to B, sharing them with HGVs doing 60+mph is terrifying and very risky.

Instead, the Department for Transport says the strategic network “can play an important role in making other roads and streets more attractive for non-motorised users. ... A well-functioning strategic road network helps keep
long-distance trafic, including lorries, away from these roads and gives cyclists more space.”

Even Australia, cited by round-the-world cyclist Mike Hall as the most bike-hostile place he rode on his trip, builds bike paths next to new or improved motorways. It seems this notion hasn’t occurred to the Department for Transport.

Instead we’ll get a second-class network whose provision is dumped on cash-strapped local councils that have proven time and again to lack the expertise to design and build safe, efficient cycling infrastructure.

Is the Department for Transport going to do anything that directly benefits cyclists?

"We will continue to help cyclists by investing in the road network," says the report, mentioning £107m of recent funding and the £600m Local Sustainable Transport Fund. Campaigner and executive editor of Bikebiz.com Carlton Reid points out that this fund is being wound down and transferred into a new-build housing fund.

The document also contains an oddly-worded pledge to “cycle-proof” the major road network, which seems to be intended to mean that major roads will be modified so they do not form a barrier to riders and pedestrians.

“We are fixing 20 of the worst places for cyclists on the strategic road network,” says the report and later adds the detail: “This year the Highways Agency will be tackling 20 places, mainly around junctions, where access for cyclists can be improved.”

Cycle campaigning charity CTC welcomed aspects of the report, but criticised much of the detail. “CTC feels that the Government should be forcing local authorities to do [provide for cyclists], not merely encouraging them,” it said.

“CTC's campaigners around the country are often battling to make sure that the Highways Agency and local authorities improve the situation when new roads are being built. Examples of schemes that are proving to be very weak for cycling are the Lincoln Eastern Bypass and the Postwick Hub interchange, part of a new road planned for northern Norwich.”

CTC campaigns director Roger Geffen said: “We welcome the Government’s commitment in its Roads Strategy to ‘cycleproof’ the major road network. Too often large roads are barriers to local journeys by bike, while those attempting to use them are 20 times more at risk of being killed than on minor urban roads. CTC has met the Roads Minister since the announcement and has urged him to ensure that local road-schemes, such as those needed for new developments, are ‘cycleproofed’ too.

You can read the whole report on the UK government website.