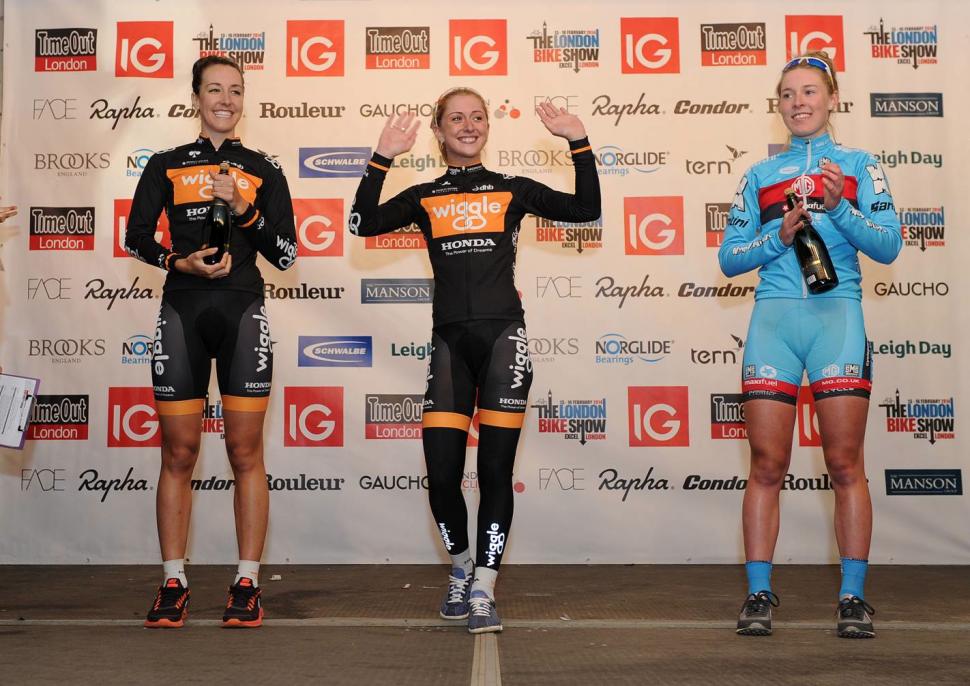 Organisers of the IG London Nocturne have revealed that it was Hannah Barnes of MG Maxifuel, and not Wiggle Honda’s Laura Trott, who crossed the line first at the end of the Rapha Elite Women’s Criterium on Saturday, but the former was relegated to second place in somewhat controversial circumstances.

FACE Partnership said that after reviewing footage compiled for Channel 4’s highlights show, due to be aired at 7.35am on Sunday morning, “it is clear” that it was Barnes who was first across the line.

However, commissaires from British Cycling ruled that Barnes, who is in top form in crit racing at the moment with a commanding lead in the Johnson Health Tech Grand Prix Series, had contested the sprint dangerously and relegated her one place to second.

"However, given the leaders' proximity in the sprint to a slower group of riders ahead on the road [and an imminent need to brake], officials have given consideration to Technical Regulations 12.1 and 20.12.2 and allowed the provisional result to stand.

"No further disciplinary action has been deemed necessary or appropriate."

FACE Partnership says that photos and videos reveal that Barnes took her hands off the bars to celebrate just before crossing the line, while riding near to rides about to be lapped.

It added that it supported the commissaires’ decision and that both MG Maxifuel and Wiggle Honda had been informed.

No communication of the controversy was made to the crowd on the night.

After the news broke this morning, Barnes tweeted: "Has anyone ever been relegated for putting their arms up crossing the line celebrating the win or am I the first? #ignocturne"

The rules in question state:

12.1 - Depending on the nature of the offence, commissaires may at their discretion impose a range of penalties upon riders, managers, helpers or officials. Such penalties may range from a reprimand/warning, relegation, time or points penalty, disqualification or a fine.

20.12.2 - All competitors must observe the law of the land in relation to road travel, and exercise extreme care when contesting sprints or primes. All forms of traffic signals and direction indicators must be obeyed. Competitors who ride dangerously shall be liable to disqualification and may be subject to further disciplinary action under the Disciplinary Rules. Race officials must not attempt to regulate other traffic on the road.